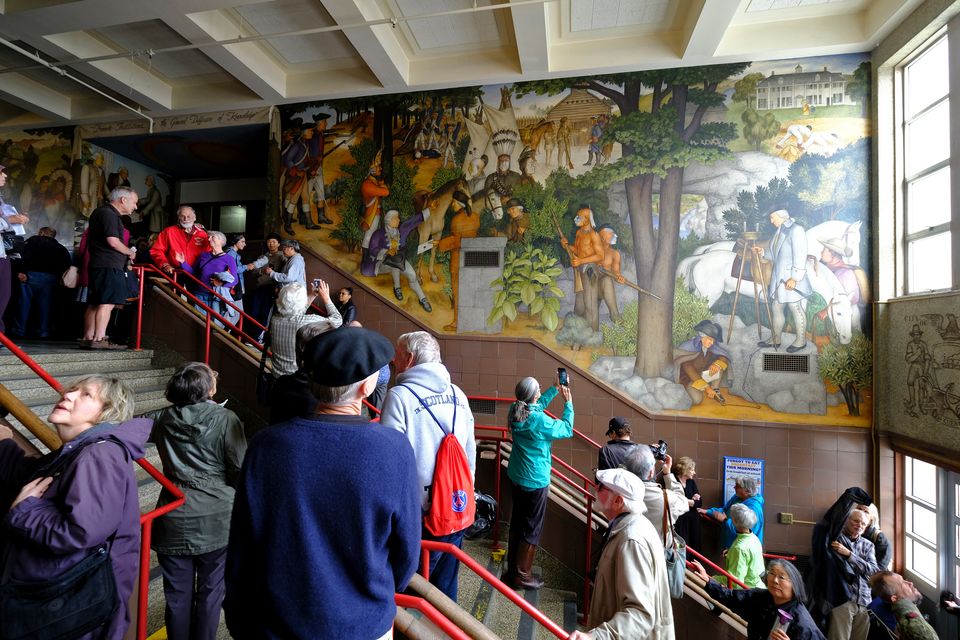 People fill the main entryway of George Washington High School to view the controversial 13-panel, 1,600-square foot mural, the "Life of Washington," during an open house for the public in San Francisco AP Photo/Eric Risberg

In the latest volley in San Francisco’s battle over a controversial school mural, a group of local African American leaders came out firmly today against a plan to erase it.

The San Francisco Board of Education voted unanimously in June to whitewash the 1,600-sq.ft mural, created in 1935-36 by the Russian émigré Victor Arnautoff at a public high school named for George Washington, on the ground that it portrays subjugated black slaves and Native Americans.

Amos C. Brown, the president of the San Francisco branch of the NAACP, said in an interview today that the artist was simply “presenting a critique about the warp and woof of George Washington’s legacy” as a slaveholder and the “genocide” committed against Native Americans by American pioneers. “You have to let the artist and the historian tell the whole story,” says Brown. “We have to hold up a mirror to America’s good and America’s bad.”

Earlier in the day, Brown joined Noah Griffin, a local columnist; the Rev. Arnold G. Townsend, a local activist and NAACP vice president; and Dewey Crumpler, a professor of painting at the San Francisco Art Institute, at a news conference calling on the school board to reverse its decision.

In voting to cover up the mural, the school board was heeding arguments that the murals were both painful and offensive for some students. The mural purports to recount the life of Washington, the nation’s first president, and includes scenes depicting slaves working on his Virginia plantation and settlers standing over the dead body of a Native American.

Defenders of the mural counter that it has artistic value, praising Arnautoff’s vivid work for the federal Works Progress Administration and his background as a Social Realist and Communist who found fault with the man for whom the school is named.

Brown said that he and other defenders of the mural planned to circulate a petition in the hope of getting the school board’s decision reversed.

“Why should anyone be about closing their minds?” he says. “We haven’t been taught to be critical thinkers. It’s cotton candy politics—a ‘feel good’ for progressive liberals that has no substance to it.”