After fire, Museum of Chinese in America hopes to salvage much of its collection 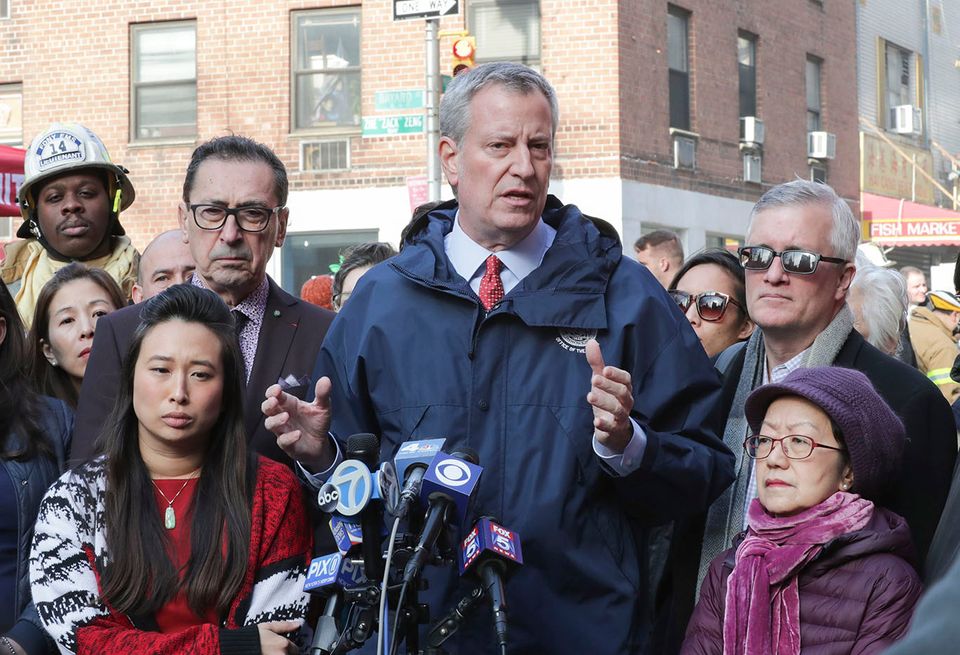 New York's mayor, Bill de Blasio, visiting the site in Chinatown where a fire threatened the archive of the Museum of Chinese in America Luiz Rampelotto/EuropaNewswire/picture-alliance/dpa/AP Images

Six days after a fire erupted in the building where it stores its archive, New York’s Museum of Chinese in America is cautiously hopeful that much of its collection can be salvaged.

On Wednesday, New York City contract workers entered the building on Mulberry Street in Chinatown where most of the 85,000 items in the collection are stored and removed about 130 boxes of materials, says Herb Tam, the museum’s curator and director of exhibitions. Their condition ranged from dry to “quite wet, but not dripping”, he says. The collection traces the history of Chinese emigrés in the United States.

The five-alarm fire spread through the fourth and fifth floors of the five-storey building, but water that firefighters used in battling the blaze reached the second floor, where the archive is stored.

“I think we feel pretty good that of what we got out yesterday, much of it can be stabilised and salvaged,” Tam says. “The technology and expertise needed to do that are quite good.” He cautioned, however, that the workers had halted the operation after only an hour or two on Wednesday and that much remains to be removed and is in an unknown condition. “When the work stopped, it was a little deflating,” Tam adds.

The recovery operation has yet to resume: “The city needs to determine whether it’s safe to go back in there. We’re just waiting to hear from them.”

The boxes removed represent just 20% of the contents of one room in the 70 Mulberry Street building—a fraction, Tam says, of the four rooms of materials overall.

Among the materials carted out were Cantonese opera costumes, a great deal of pop cultural items from the 1990s and a broad variety of documents, he said. Many of the boxes were taken to 215 Centre Street, where the museum is located, to be air-dried in a space that is separate from the museum itself. Others went to a site in Pennsylvania where items can be freeze-dried. An estimated 40,000 of the museum’s collection of 85,000 items had been digitised, Tam says.

A stream of conservators and archivists have volunteered to assist in salvaging materials since the 23 February fire, the curator says—“the list is off the charts”—and donors have so far contributed over $106,000 to a fund earmarked for the recovery effort.

Tam sought to emphasise that the museum itself, in a space designed by the architect Maya Lin that opened in 2009, is intact and open to the public. Currently it is hosting an exhibition about the Chinese workers who laboured on the US Transcontinental Railroad in the 1860s and a travelling show about sister institutions that also document Chinese-American history. A permanent exhibition tells the story of the Chinese in America from the mid-19th century to now.

The museum has also scheduled events timed to the Chinese lunar New Year.