The Chinese artist and activist Ai Weiwei has once again posed as Alan Kurdi, the drowned Syrian refugee toddler who was pictured washed up on a Turkish beach in September 2015. The new image, which Ai posted on Instagram on 29 May, shows him lying face down on a bed of porcelain sunflower seeds installed at the Israel Museum for his show, Maybe, Maybe Not (2 June-30 August).

Ai first recreated the harrowing scene in February 2016 for India Today magazine on the beach where Alan was found, sparking controversy in the art world and beyond. His decision to restage the image in Jerusalem appears to be a response to Donald Trump’s visit to the museum last week. Ai says the institution “covered” some of his works during the US president’s address there on 23 May.

The artist’s Instagram feed features one video of Trump arriving on stage with the Israeli prime minister Benjamin Netanyahu. The caption reads: “Trump’s visit to the Israel Museum. Behind the stage are my artworks, which were taken away and covered for his presence.” Neither Ai nor the museum could be reached for comment.

Another photograph on Ai’s Instagram account shows one of his tree works on view as Trump is escorted through the museum. Trump is pictured with his back to the sculpture, which Ai created from dead roots, trunks and branches gathered in the mountains of southern China. The caption simply says: “Look what is behind….” 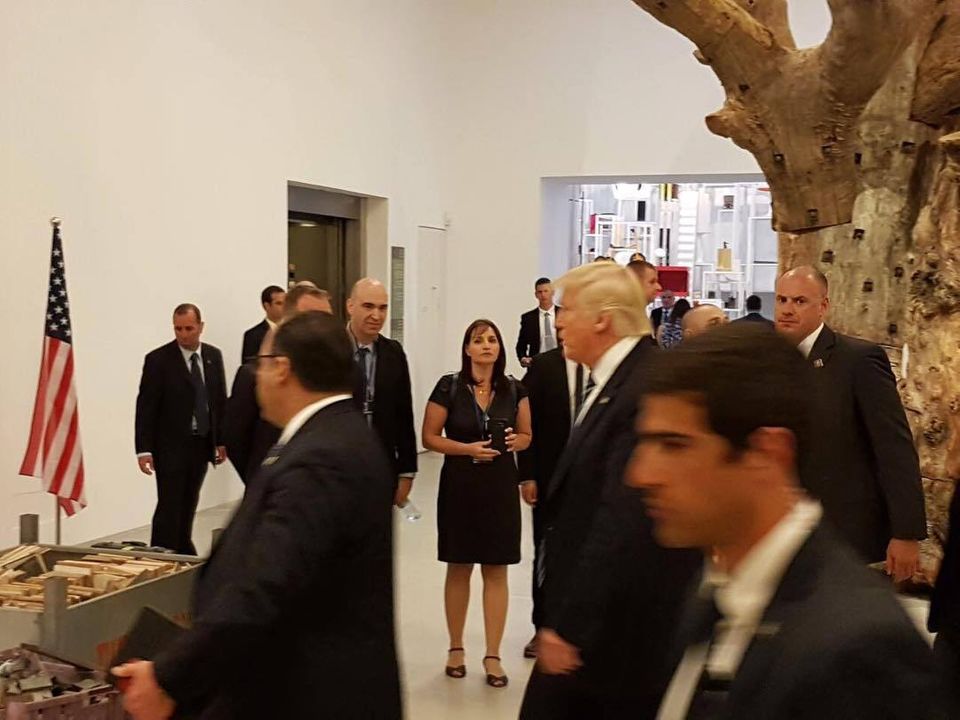 US President Donald Trump with his back to one of the artist's tree works (Image: aiww/Instagram)

The US president had been due to deliver a speech before the Knesset, but it was cancelled over fears he would be heckled by members of the Israeli parliament whose debates are famously raucous. Instead, Trump gave an address at the museum, in which he said the reason for his official state visit to Israel was to “[bring] nations together around the goal of defeating the terrorism that threatens the world”.

Trump made reference to his trip to Saudi Arabia just days earlier, during which the Saudi Arabian government presented two exhibitions of contemporary art especially for him and his wife Melania.

He said his message to that summit was the same message he had for Israel: “We must build a coalition of partners who share the aim of stamping out extremists and violence, and providing our children a peaceful and hopeful future.” He also said his administration would “always stand with Israel”.

Ai’s works are well-known for being politically sensitive and critical of human rights abuse. His documentary on refugees took him to the Palestinian territory of Gaza in May 2016. “The condition here is unbelievable. Gaza is really suffering from this isolation and blockade from all over, and the living condition and the whole situation, the rights to move, all those have been forbidden. I think it’s really a crisis,” he told the media at the time.

In January, Trump ordered a travel ban on citizens from Iraq, Iran, Libya, Somalia, Sudan, Syria and Yemen for 90 days, and banned refugees from Syria. A revised order lifted the ban against Iraqi visitors, but the annual number of refugees entering the US was still slashed from 110,000 to 50,000.

Maybe, Maybe Not is Ai’s first show in Israel. In February 2016, the Tel Aviv Museum reportedly pulled an exhibition by Ai and the Israeli photographer Miki Kratsman because of political pressures. It had been due to include portraits of Palestinians. According to the museum, there were problems scheduling the show.

UPDATE: On 1 June on spokeswoman for the Israel Museum said: The museum kept in place all the works that had already been fully installed. (The artist himself posted a photo on Instagram of the president walking by one of his works installed in the galleries). To avoid potential damage to the uninstalled works caused by the large numbers of people entering the museum for the speech, and per normal museum protocol, security measures were taken to protect the works that were in the process of being installed and not yet ready for public viewing.