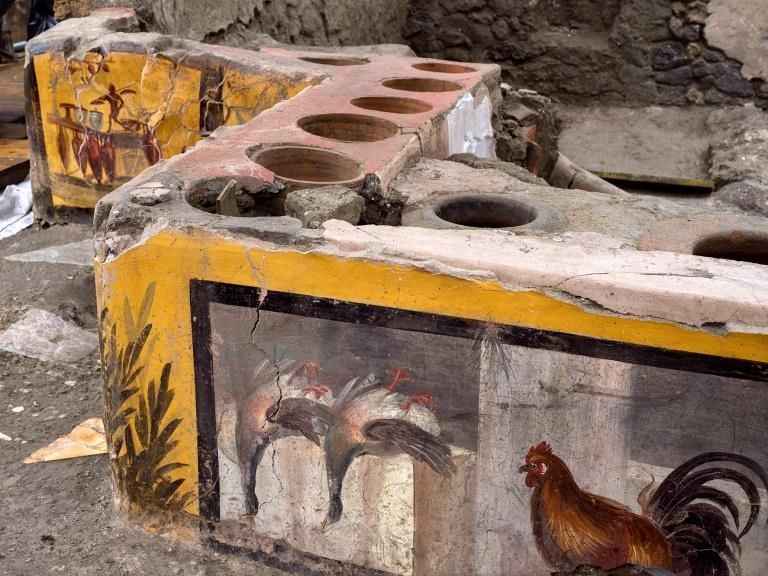 The Thermopolium of Regio V, one of the snack bars at Pompeii Courtesy of the Archaeological Park of Pompeii

A frescoed “fast food” bar has been discovered by archaeologists excavating the ancient site of Pompeii, throwing light on gastronomic habits in the town which was engulfed by volcanic ash in 79AD spewing from Mount Vesuvius.

The thermopolium food stall of Regional's V, located along the Alley of Balconies, is the first of its kind to be excavated in its entirety; a side of the counter adorned with an image of a nymph riding a horse was first found two years ago. Other still-life scenes revealed include dead birds ready to be cooked, a rooster and a dog.

The archaeological team also found the remains of pigs, snails, fish and goats in earthenware pots, highlighting the type of food sold to passers-by, Massimo Osanna, director general at the Archaeological Park of Pompeii, told The Guardian newspaper. He added that the discovery “provided truly extraordinary evidence of the Mediterranean diet”.

“The first [laboratory] analyses confirm that the paintings on the counter depict, at least in part, the foodstuffs and drinks which were actually sold inside the thermopolium,” says a statement on the Pompeii website.

“The paintings on the counter include two mallard ducks, and indeed a fragment of duck bone was in fact found inside one of the containers, alongside swine, goats, fish and land snails, indicating the great variety of products of animal origin used in the preparation of the dishes.” At the bottom of a dolium (a container for wine), the presence of beans was detected which had been broken apart or ground, possibly to add flavour, adds the statement.

Human remains were also found in the snack bar area, possibly someone who was “surprised by the burning vapours just as he had his hand on the lid of the pot that he had just opened”, Osanna said.

Last month, the bodies of two men were unearthed at Pompeii; the men, identified as a wealthy landowner and his slave, were discovered during excavations at the Civita Giuliana, a suburban villa northwest of Pompeii.