Composer has funded a two-year, £60m renovation of the Theatre Royal Drury Lane to turn it into a public gallery and heritage attraction 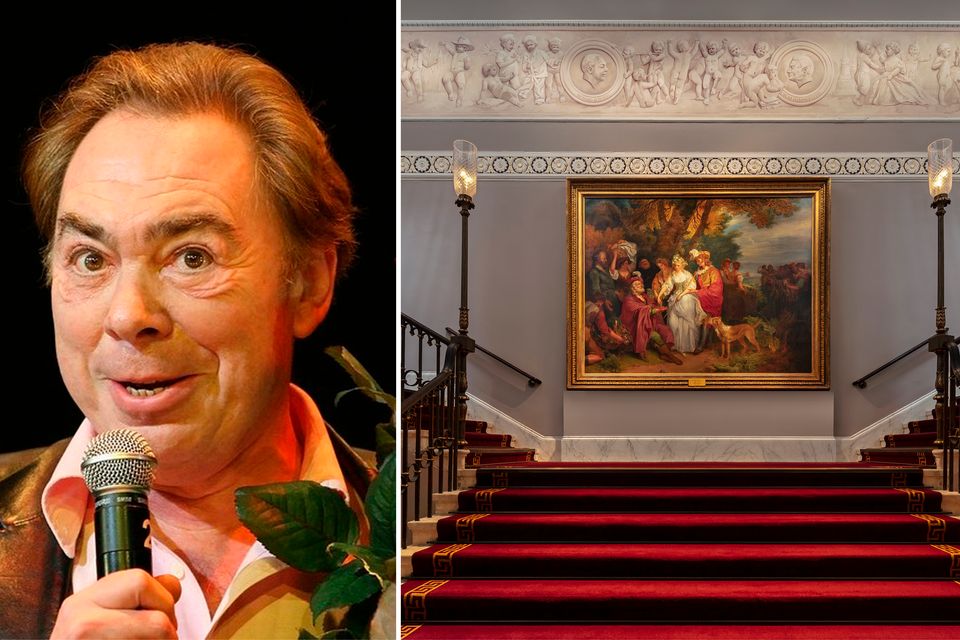 The composer and theatre impresario Andrew Lloyd Webber is showing some of his Pre-Raphaelite masterpieces at the Theatre Royal Drury Lane in the heart of London’s theatreland. A series of eight contemporary works by the US artist Maria Kreyn depicting Shakespearian scenes are also on show at the 358-year-old venue, which has undergone a two-year, £60m renovation funded by Lloyd Webber.

Parts of the theatre, acquired by Lloyd Webber in 2000, will be publicly accessible during the day, turning the space into a public gallery. The South Coffee Room off of the Grand Saloon houses several major Pre-Raphaelite works owned by Lloyd Webber including Edward Burne-Jones (1833-98)’s The Adoration of the Kings & Shepherds triptych (1861) and The Depths of the Sea (1886); this area will be publicly accessible later this year.

In the downstairs Pantheon-like Rotunda bar area stand five statues of celebrated theatre figures including William Shakespeare, the Irish-born musician Michael Balfe and the 18th-century theatre manager David Garrick. Meanwhile, grisailles dotted around the upper floor—painted putty-coloured panels in 3D effect—have been created by Ian Cairnie, depicting some of the theatre’s musical productions including Show Boat (1928) and My Fair Lady (1958). One of the works shows Lloyd Webber listening in to composers Rodgers and Hammerstein during a rehearsal.

Side corridors are dotted with historical works linked to the building’s development including a portrait by P. Oswald Muller of the actor Augustus Harris, who took over the management of the theatre in 1879. In another area hangs musician Ronnie Wood’s vast panorama of people featuring celebrities such as Elton John and Naomi Campbell.

How these paintings and sculptures are lit, bringing out their finer aspects, is often overlooked. Andrew Molyneux, the co-founding director of London-based TM Lighting, explains how the company approached the ambitious theatre commission, and why Lloyd Webber proved to be a hands-on patron.

The Art Newspaper: Was this one of your most challenging projects? Have you worked in a theatre setting previously?

Andrew Molyneux, TM Lighting: Although we have lit artworks in a theatre previously, having illuminated boxes in the Royal Albert Hall, we had never worked to anywhere near this scale lighting art in a theatrical space. This was a new type of project for us as our scope normally sits across historic houses, institutions, commercial galleries, hospitality spaces and private homes. So carrying out a project in a theatre presented an exciting and interesting prospect. 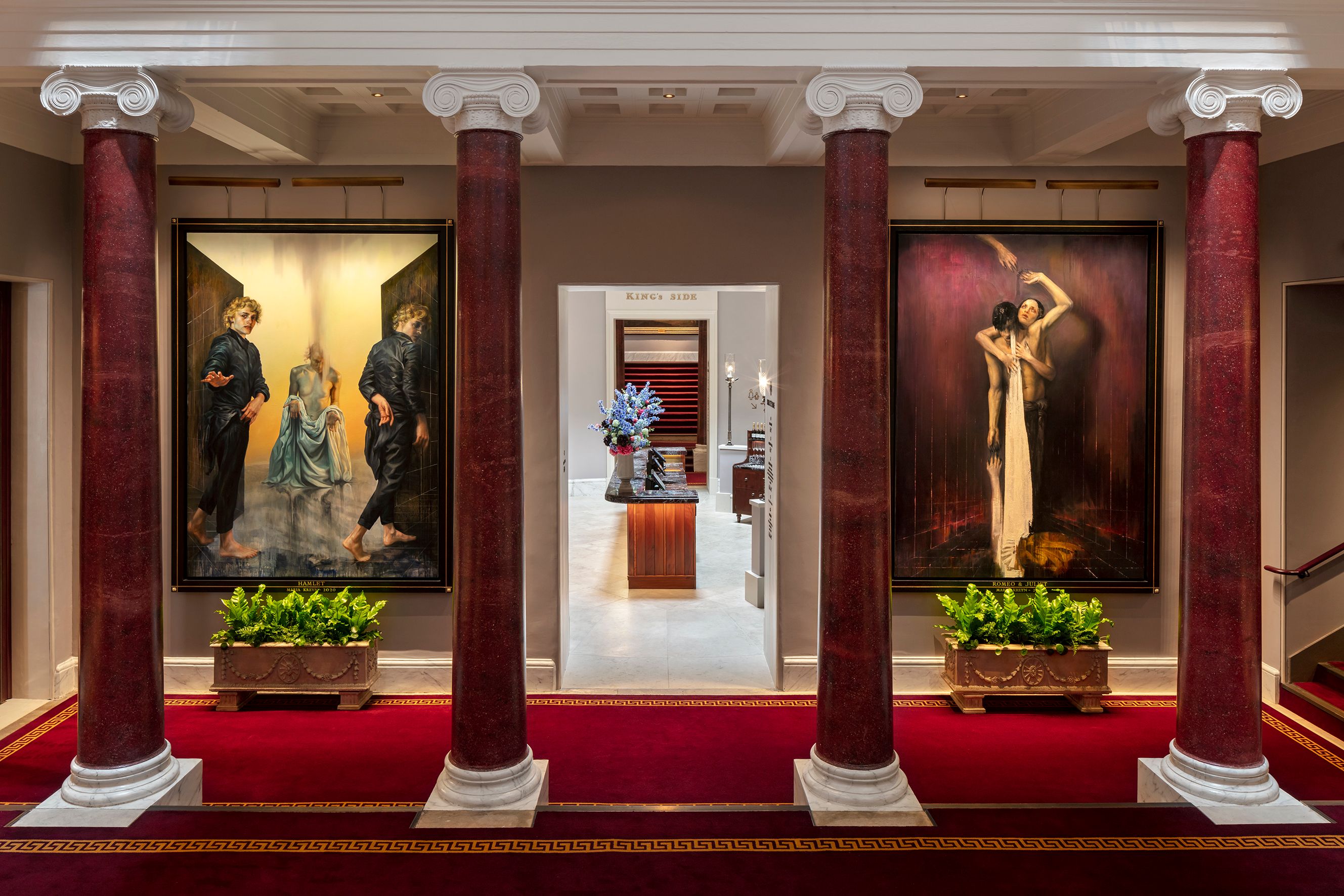 The most technical aspects of the project were lighting the two Shakespeare scene paintings on the opposing Wyatt Staircases on either wing of the theatre. Francis Wheatley’s The Winter’s Tale, Act IV, Scene 5 (1788) and William Hamilton’s Love’s Labours Lost, Act IV, Scene 1 (1788) were both initially planned to be lit from above with our TM classic Picture Light, but Lloyd Webber's preference was a cleaner aesthetic. Removing the picture lights assured minimal interruption to the building architecture and frieze above. Instead, we installed track-mounted spotlights to the undercarriages of the staircases above, moving from a heritage technique of the classic picture light to a contemporary technique of using a spotlight. We adapted the spotlights to provide the effect of classic picture lights for these artworks, focusing light very precisely onto them. This eliminated any distracting "light spill" over onto the frame or wall and ensured the paintings alone were lit.

There are discreet spotlights on the statues in the downstairs Rotunda bar—how did that concept come about?

We worked with the appointed lighting design practice BDP to position lights to illuminate the art and statues throughout the theatre. The five statues of playwrights that are arrayed across the Stalls Bar are each lit by our discreet spotlights that we attached to standing lamps near each sculpture. This was a case of trial and error with focussing, improving the result each time through use of different lenses to slightly alter the strength of light. Lloyd Webber was hands on with his feedback regarding the light direction and focusing for the statues, just as he was with his personal art collection throughout the theatre.

How did you adapt your specialist picture lights for the works on show?

We design our picture lights and spotlights with versatility in mind so that they can be adapted to precisely light any work in any space. Each light at the Theatre Royal Drury Lane is individually focussed to each artwork to illuminate it with high colour rendition light that enables an work to truly "perform" in its space.

Aside from the need for the light levels to be kept within the museum standards for conservation, each work deserves individual attention as overlighting a painting with a lot of black in the work can turn its appearance grey to the viewer, and a light-hued artwork may not need much light at all. Customising lighting for each piece is crucial. Steered by Lloyd Webber, we approached this project with its dramatic context firmly in mind.