The 11 June protests, the largest seen on the island in 30 years, were sparked by years of economic hardship and a lack of government support for its people 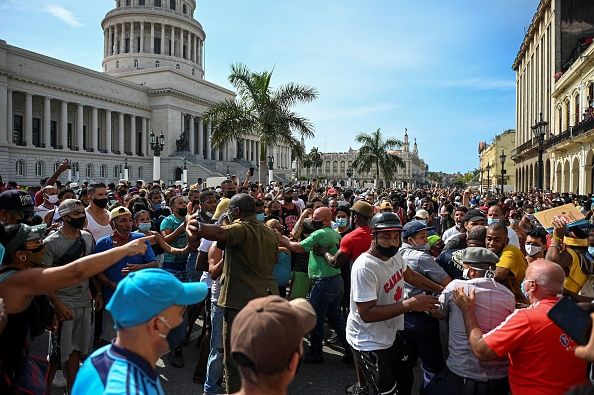 Thousands of Cubans took part in rare protests Sunday on 11 July 2021 against the government of Cuban President Miguel Diaz-Canel in Havana, chanting "Down with the dictatorship" and "We want liberty" Photo by YAMIL LAGE/AFP via Getty Images

After a dramatic day of protests across Cuba on Sunday 11 June, many led by artists and cultural figures, US president Joe Biden today spoke in support for the Cuban people who are "demanding their freedom from an authoritarian regime", and called on the Cuban government to refrain from violence against the its citizens as they "assert their universal rights". Biden echoed a sentiment shared by many people both on and off the island, saying: "I don't think we've seen anything like this in a long, long time."

The sweeping movement comes following years of steady economic decline, food shortages, lack of heath care and a government that continues to clamp down on those who speak out against it, such as the artists Hamlet Lavastida, Luis Manel Ortero Alcántra and Tania Bruguera. A breaking point was reached on Sunday, as the public took the streets to protest the increasingly grim conditions on the island nation.

“Patria y Vida” some shouted, a positive inversion of Ernesto "Che" Guevara's revolutionary battle cry “Patria o Muerte”, as they marched in San Antonio de los Baños in western Cuba Sunday morning and Palma Soriano in the east. News of the protests spread quickly and by midday thousands were marching though Cuba’s capital city, Havana, along the Malecon and gathering in front of national monuments.

“I’m here because of hunger, because there’s no medicine, because of power cuts—because there’s a lack of everything. I want a total change: a change of government, multiparty elections, and the end of communism,” one man, who chose not to identify himself told the Guardian. That sentiment was echoed in cities across the island and videos proliferated on social media, with protesters shouting: “The people are dying of hunger, our children are dying of hunger!” The documentation did not last long, however, with Cuban authorities shutting down the internet services in some cities to stop people from broadcasting the protests live, according to the Associated Press.

By 3pm, Cuban president Miguel Díaz-Canel interrupted every local television station to broadcast a call for “all the revolutionaries of the country, all the communists, to take to the streets”. Diaz-Canal said “destabilisation in our country” would be met with a “revolutionary response” and blamed the massive rallies on dissidents, employed by the US, who were trying to weaken the island’s economy. Soon, pro-government supporters and state security forces and police began to clash in the street and jockey for position in front of national monuments and government buildings, with El Diario de Cuba reporting that police in some areas used live ammunition on protesters.

Diaz-Canal, who took office in 2018 and in 2021 replaced Raul Castro as head of the Cuban communist party is seen among the artistic and intellectual community as an extension of the Castro regime. While some hope that once the Castros relinquished power, there would an increase in artistic and economic freedom, that does not seem to be the case. Artists and activists are constantly harassed, monitored, arrested or disappear.

Most recently, Hamlet Lavastida, a member of the influential group of Cuban artists and activists 27N, and a vocal critic of the Cuban government’s tactics against freedom of expression, was arrested upon returning from an artist’s residence in Germany. And in May, the artist Luis Manel Ortero Alcántra, founder of the San Isidro movement, was detained and hospitalised against his will by the Cuban security service eight days into a hunger strike calling for free speech and artistic freedom on the island. Ortero’s story garnered international attention and the Cuban government’s aggressive actions against those seeking the right of freedom of artistic expression have been well documented by human rights organisations.

Bruguera, who has had police stationed in front of her home for weeks and regularly has her internet cut off, posted on Facebook in response to Diaz-Canal's claim about the protests, saying that no one has the organisational capacity to bring thousands of people onto the streets. "People just got tired of being afraid," she said, "they realised that this government only cares about staying in power."