Plus more gossip from the fair

Gettin’ jiggy with Cookie Monster Sesame Street aficionados should make a beeline for Galerie Francesca Pia’s booth at Art Basel, where a Cookie Monster lookalike is pulling in the crowds. A bright-blue grand piano in the guise of the lovable muppet is the creation of the Brooklyn-based artist Stefan Tcherepnin, who has a major show coming up this October at the Stedelijk Museum in Amsterdam. Chariot of a Secret Order (2016) ramps up the monster madness by vibrating every so often, prompting a passing visitor to exclaim: “When did Cookie Monster get so jiggy?” The work sadly does not play its furry muse’s unforgettable catchphrase: “Me want cookie! Me eat cookie!” 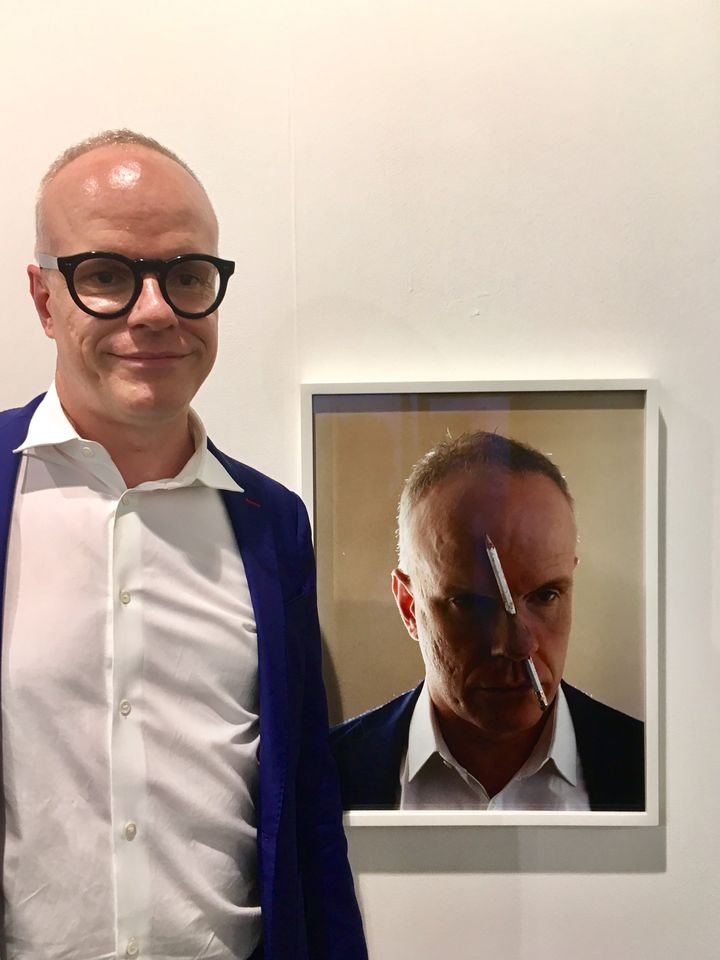 Obrist’s brush with extreme piercing We are pleased to report that Hans Ulrich Obrist has now fully recovered from his tortuous portrait session at the hands of Torbjørn Rødland, whose photograph on the Air de Paris stand at Art Basel shows the Swiss über-curator sporting an extreme form of nasal piercing. When Obrist asked the artist to photograph him for his latest book of curatorial projects, he was instructed to set aside two full hours. He had no idea that the shoot in Rødland’s Los Angeles studio would involve a very particular kind of nose job—mercifully carried out by a Hollywood prosthetics expert rather than a surgeon. “I completely surrendered,” the ever-game HUO told us, admitting that he is glad to have his own schnozz back. Rødland’s photograph is in an edition of three and can be bought for €8,000. For a cheaper version, look out for Obrist’s book, due at the end of the year. 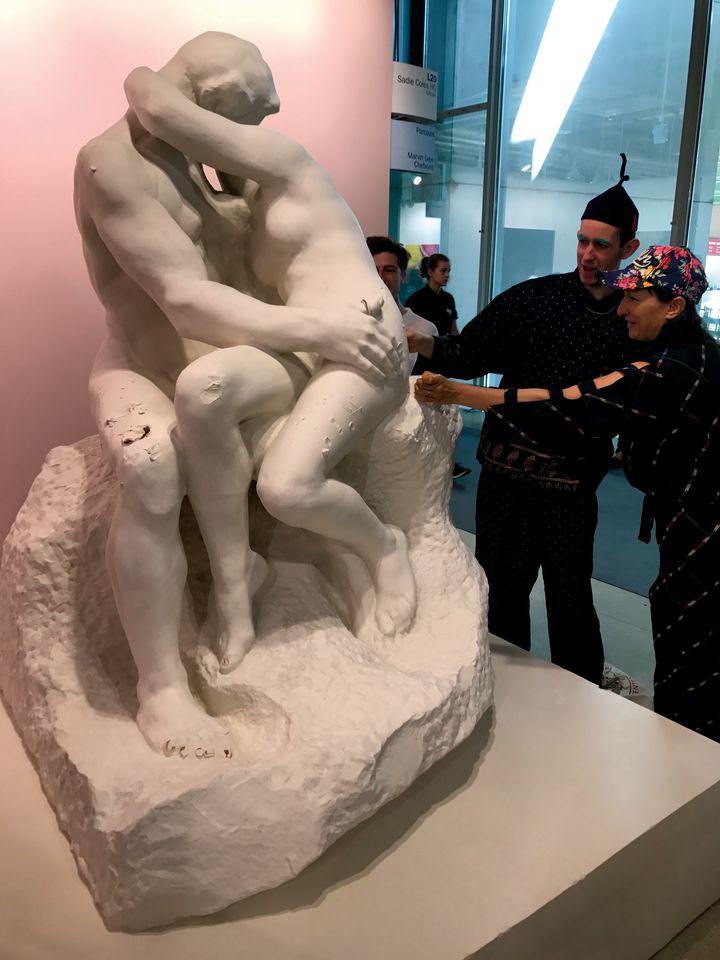 Touching tribute to Rodin’s The Kiss Urs Fischer’s 2017 interpretation of Rodin’s The Kiss, on show at Sadie Coles’s stand at Art Basel, is getting fairgoers all touchy-feely. The famous depiction of a canoodling couple—inspired by the star-crossed Paolo and Francesca in Dante’s Divine Comedy—is cast in white Plasticine, which people can knead, embrace and remould. Another Francesca, the esteemed art critic Francesca Gavin, was thrilled with a minuscule rose she made from the clay. But prospective collectors need not fear—anyone who buys the saucy sculpture has the option to recast it in its original form. 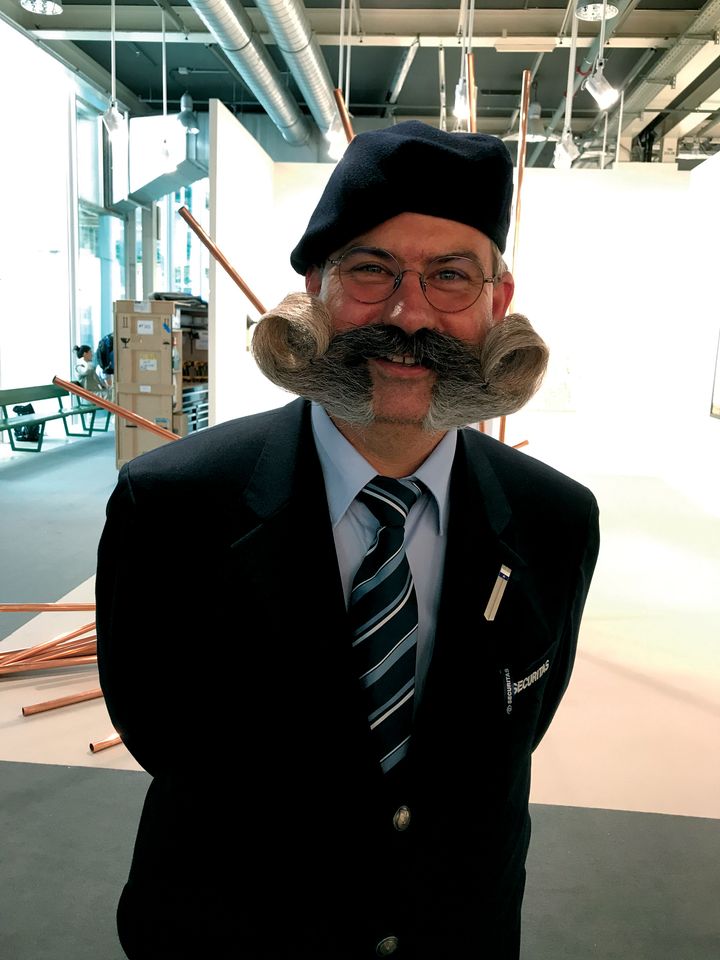 Basel’s beardy champion Visitors to Art Basel may not be aware that there is a champion moustache-grower in their midst. Hervé Diebolt, one of the fair’s many diligent warders, won second place in the “freestyle moustache” category of the ultra-competitive World Beard and Moustache Championship in Schluchsee, Germany, in 2014. The moustachioed Messeplatz employee says he has been cultivating his wondrous whiskers for “five or six years”—his facial hair is now around 50cm long. We wish Art Basel’s hirsute hero victory in his next battle of the beards. 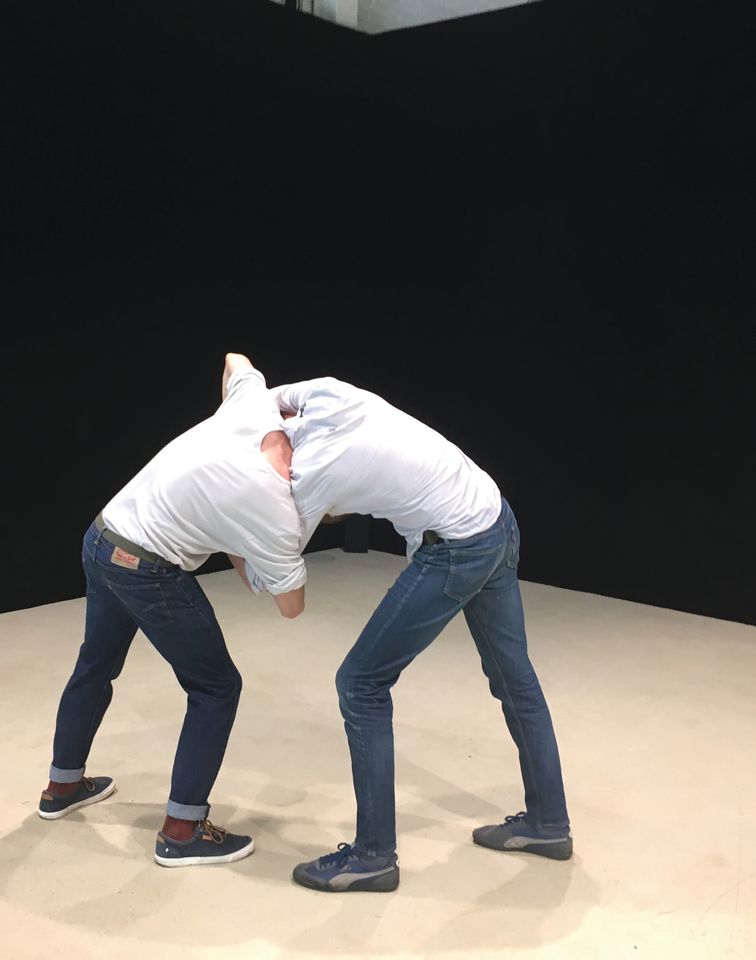 Martial arts Body language comes under especially close scrutiny at an art fair, and those puzzled by the balletic dancers on Galeria Dawid Radziszewski’s Statements stand may be interested to know that their enigmatic moves have been meticulously choreographed by the Polish artist Joanna Piotrowska from a standard self-defence manual. Rest assured the performance is still fundamentally pacifist, with every element based on deflecting, rather than delivering, blows. Still, some of the moves may come in handy when fending off rivals for a purchase or a sale. 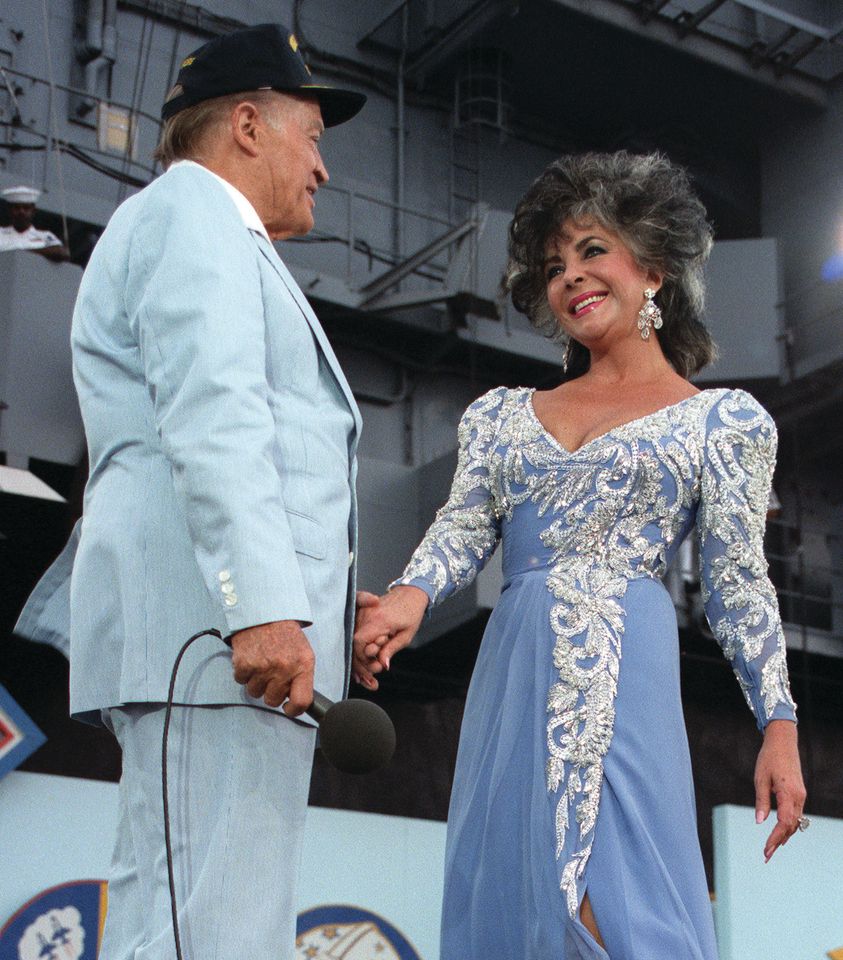 Granny Liz tells all The UNAIDS fundraising gala dinner and auction was a cross-generational affair on Monday, as Ndaba Mandela and Quinn Tivey, the grandsons of Nelson Mandela and Elizabeth Taylor, joined forces to honour the legendary actress’s legacy of Aids activism. Ndbaba declared that the best way to make his grandfather proud was “to make sure our children inherit a world free of HIV and Aids”. Guests, including the collector Craig Robins and Princess Eugenie of York, were whipped into a bidding frenzy. Among the star lots was a photograph by Catherine Opie of a suite of diamonds and rubies given to Taylor by her third husband, Mike Todd. As Tivey introduced the piece (which sold for SFr65,000), he revealed that Dame Liz had been down with the kids, watching movies with him in bed and offering “ridiculous raunchy girl advice”. Now, that would be priceless.