Ahead of US elections, artist group highlights 'devastating impact' of Trump's travel ban three years on 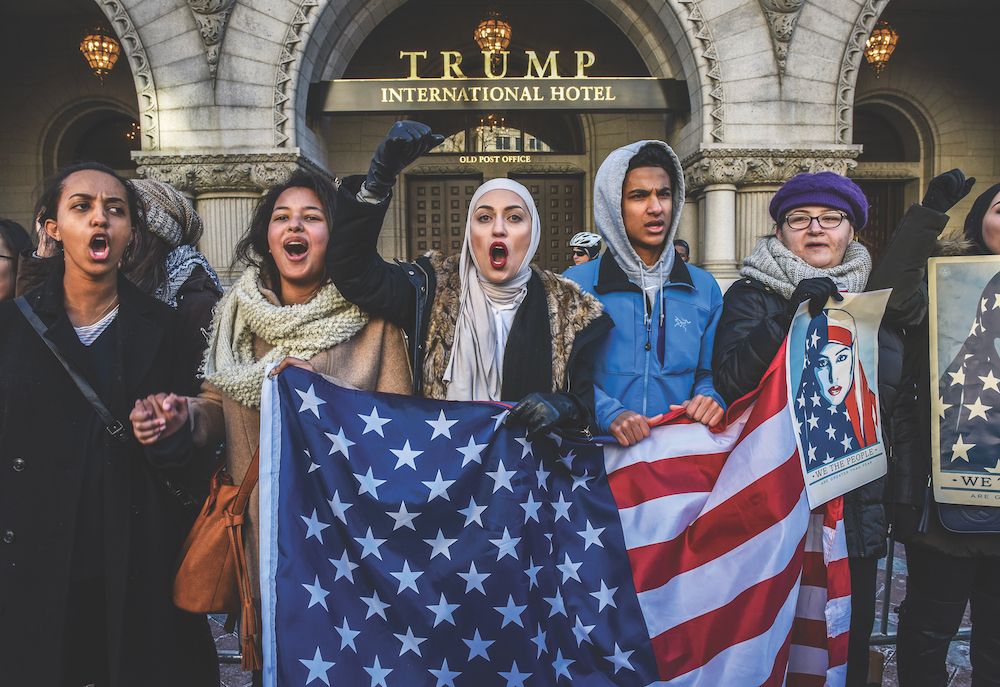 People outside a Trump hotel protest the travel ban in 2017, when it was first introduced on seven Muslim-majority countries Bill O’Leary/The Washington Post via Getty Images

In the run-up to the US presidential election this November, the New York-based human rights non-profit Artistic Freedom Initiative (AFI) is drawing attention to one of President Donald Trump’s most controversial acts, Executive Order 13780, the so-called travel ban that prevents people from several Muslim-majority countries from entering the US.

“AFI very much hopes that the travel ban will be overturned,” says Ashley Tucker, the organisation’s director of programmes, who is helping to coordinate an online campaign that will run from late September until election day (3 November). AFI will present information on the timeline of the ban and how it can be officially repealed, and produce a series of Instagram live interviews with, and presentations by, some of the displaced artists who were part of the 2018 exhibition Executive (Dis)Order: Art, Displacement & the Ban at the Queens Museum in New York. That show, organised by the AFI as part of the museum’s community partnership exhibition programme, examined the impact of the travel ban on 11 artists, including the Tehran-born painter Ali Chitsaz and the Somali multimedia artist Ifrah Mansour, who showed the piece My Aqal, Banned and Blessed (2018). “The work celebrates the flags of the banned countries while reflecting the invisibility of global refugees,” Mansour says.

The ban, first enacted in January 2017 as Executive Order 13769, barred citizens of Iran, Iraq, Libya, Somalia, Sudan, Syria and Yemen from travelling to the US. Iraq and Sudan were later removed from the list and North Korea, Chad and Venezuela were added, following legal challenges that the order was unconstitutionally directed against Muslims (Chad was later dropped). This January, President Trump issued another proclamation, expanding the ban to include certain nationals from Myanmar, Eritrea, Kyrgyzstan, Nigeria, Sudan and Tanzania.

“The original travel ban—and subsequent changes and additions—was, and continues to be, a major blow to the artists in our network. We wanted to revisit this particular group of travel ban-affected artists two years later, in the weeks leading up to an election of monumental importance,” Tucker says.

Mansour outlines the impact of the restrictions, which she says, had a “devastating impact” on asylum seekers and refugee resettlement organisations. “But international artists were silently suffering,” she says, adding that two international shows in which she was due to participate were cancelled. “I feared that I would not be able to return to the United States,” Mansour says.

Throughout the Covid-19 pandemic, AFI has continued to maintain a “strong, tight-knit artist network which is vital to our mission and ethos”, Tucker adds, stressing that the organisation was always “extremely tuned into immigration issues and policies for obvious reasons; they directly impact the artists in our network in ways that are often life altering, for better and worse.”

AFI’s legal services for artists fleeing persecution or censorship in their countries of origin have been crucial in light of the travel ban. The organisation says it has built a “robust network of pro bono attorneys dedicated to providing immigration representation to at-risk artists.”