Artistic censorship is on the rise, advocacy group reports

Attacks on artistic freedom are on the rise globally, according to a report issued by Freemuse, an independent organisation based in Copenhagen that advocates for and defends freedom of expression.

A study the group conducted, based on media reports and other sources, found that there were 469 cases of attacks on artistic expression last year, almost double the count in 2014. Most of the cases were issues of censorship (292), though the total also includes incidents of artists being detained (23), prosecuted (42), physically attacked (24), or even killed (3). Among the worst offenders last year were authoritarian governments, with China having registered 20 “serious violations”, followed by Iran (16) and Russia (15). The reasons for and types of restrictions on expression detailed in the study are multifarious—headings include “Turkey: Terror Legislation and a Thin-Skinned President” and “Egypt: Censorship Stifles Artistic Freedom”. 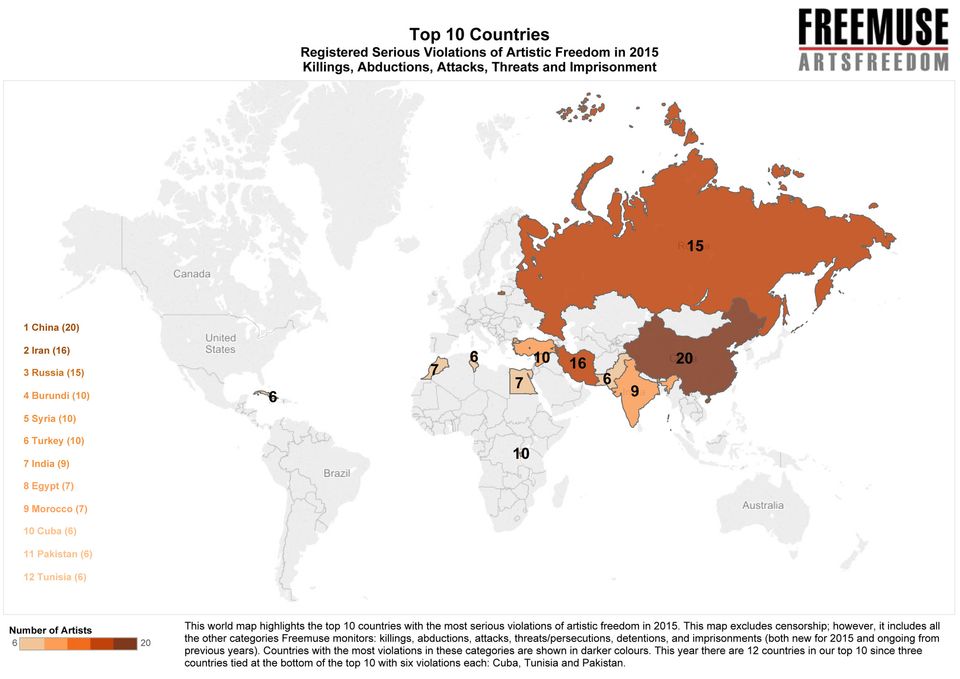 This world map highlights the top 10 countries with the most serious violations of artistic freedom in 2015. This map excludes censorship; however, it includes all the other categories Freemuse monitors: killings, abductions, attacks, threats/persecutions, detentions, and imprisonments (both new for 2015 and ongoing from previous years). Countries with the most violations in these categories are shown in darker colours. This year there are 12 countries in our top 10 since three countries tied at the bottom of the top 10 with six violations each: Cuba, Tunisia and Pakistan.

The data for the study was largely collected from publicly available sources, such as news media, partner organisations and independent reporters. Freemuse therefore say the “disturbing increase” in attacks on expression can be partially explained by improvements in documentation and awareness. But this also means that countries like North Korea, where there is strict state control of the media, have few reported incidents, a flaw Freemuse’s senior programme officer Magnus acknowledged in an interview. “The fact that North Korea is among the most censored and controlled countries in the world is not reflected in our statistics,” Ag says, attributing the lack of evidence “to the fact that it is extremely difficult for any human rights organisation to document and verify information about violations within this repressive regime”. The one case of censorship it registered in North Korean last year was a decree issued by the leader Kim Jong-un, demanding the destruction of tapes and CDs that could threaten the government.

The study also classified the November terrorist attacks in Paris, which resulted in the deaths of 89 people, as the single largest attack on artistic freedom. “Without speculating about the motive of the attackers, we see the horrendous attack on the Bataclan as an attack on a music venue where audiences were enjoying the right to participate in cultural life,” Ag says. He adds that an aftereffect was that many people in the city “refrained from visiting museums, attending concerts and theatres in the months following the attacks”.

The murders of the artists at the offices of the satirical magazine Charlie Hebdo are curiously not counted, however. Ag says this is because the study does not include incidents involving “journalists, non-fiction writers, bloggers and cartoonists working in the news media”, since these are monitored by organisations such as PEN International, Reporters Without Borders and the Committee to Protect Journalists.

One positive sign Freemuse points to is the reaffirmation of the right to creative and artistic expression by 53 member states during 18 September session of the United Nations Human Rights Council. This included a statement by the Latvian ambassador Janis Karklins, who said in part: “We stand firm in our commitment to protect and promote the right to freedom of expression, including artistic and creative expression.” Although it did point out that the fight is far from over, since only 53 of the United Nation’s 193 member states supported the statement.

“Artistic creativity demands an environment free from fear and insecurity,” Ag says. “I think we should learn from journalists and make sure any artist facing hardship around the world knows that, if she is being silenced by censorship, threats or imprisonments, the international arts community will stand behind her and fight those who fear the power of creative expressions.”

• The full report, Art Under Threat, is available on Freemuse's website.