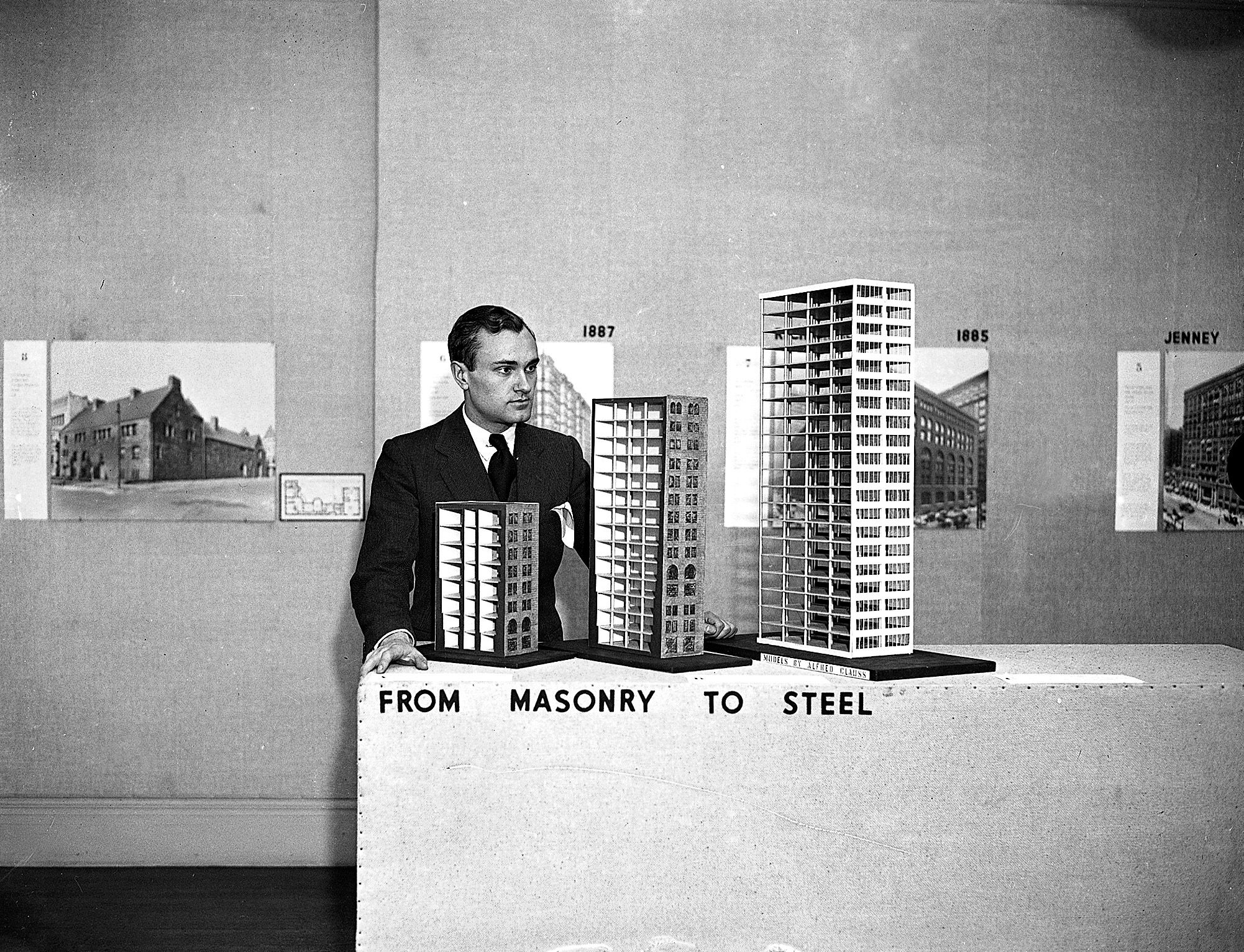 While chairman of the Department of Architecture of the Museum of Modern Art in New York, Philip Johnson illustrated the progress of building construction from masonry to steel during an exhibition, 18 January 1933 AP Photo

A group of more than 30 artists and academics have signed an open letter requesting that public-facing institutions, including the Museum of Modern Art in New York and the Harvard Graduate School of Design in Cambridge, remove the architect Philip Johnson’s name from all leadership titles and public spaces. Johnson, who is well-known for such architectural feats as the famed Glass House in Connecticut, was the founding director of the Museum of Modern Art’s Architecture and Design Department, and the department’s chief curator role is still named for him, as are some of MoMA’s galleries. The letter published on 27 November asserts that “Philip Johnson’s widely documented white supremacist views and activities make him an inappropriate namesake within any educational or cultural institution that purports to serve a wide public.”

According to The New York Times, the architect, who died in 2005, loudly championed racist viewpoints throughout his younger years. In the 1930s, Johnson attended Nazi rallies in Germany and visited Hitler Youth Camps (some of which led to his being investigated by the FBI), claimed that photographs of Nazi victims were staged in Brooklyn, loudly made anti-Semitic comments, and spoke in support of eugenics. The Times also adds that, following the war, Johnson later rejected Naziism and publicly tried to distance himself from many of these past claims, although as the urban design scholar Nikil Saval noted in a New Yorker magazine piece, later in life he still expressed admiration for Adolph Hitler.

“There is a role for Johnson’s architectural work in archives and historic preservation,” the group wrote in the letter, which has been signed by the artist Xaviera Simmons; the MacArthur fellow and landscape architect Kate Orff, and the architect Mabel O. Wilson, among others. “However, naming titles and spaces inevitably suggests that the honoree is a model for curators, administrators, students and others who participate in these institutions.” The letter continues by saying that Johnson used his powerful position at MoMA to “collaborate with the German Nazi party” through actions such as translating and disseminating propaganda, and forming an affiliate party in the US. It also asserts that Johnson “effectively segregated the architectural collection at MoMA, where under his leadership (1933-88) not a single work by any Black architect or designer was included in the collection”.

Update: On 5 December, Sarah Whiting, the dean of Harvard University's Graduate School of Design wrote a letter in response to this call to action. The university owns a home that Johnson designed when he was a student there, which is unofficially known as the Philip Johnson Thesis House. In her letter, Dean Whiting says she is taking steps to officially rename the structure 9 Ash Street. “Philip Johnson’s global influence in architecture in the 20th century and his grip on the field even now, 15 years after his death, cannot be overstated,” Whiting says, but adds that “his racism, his fascism, and his strenuous support of white supremacy have absolutely no place in design.”

At the time of publication, MoMA has not yet responded to a request for comment.