Artists get down to work at the fair 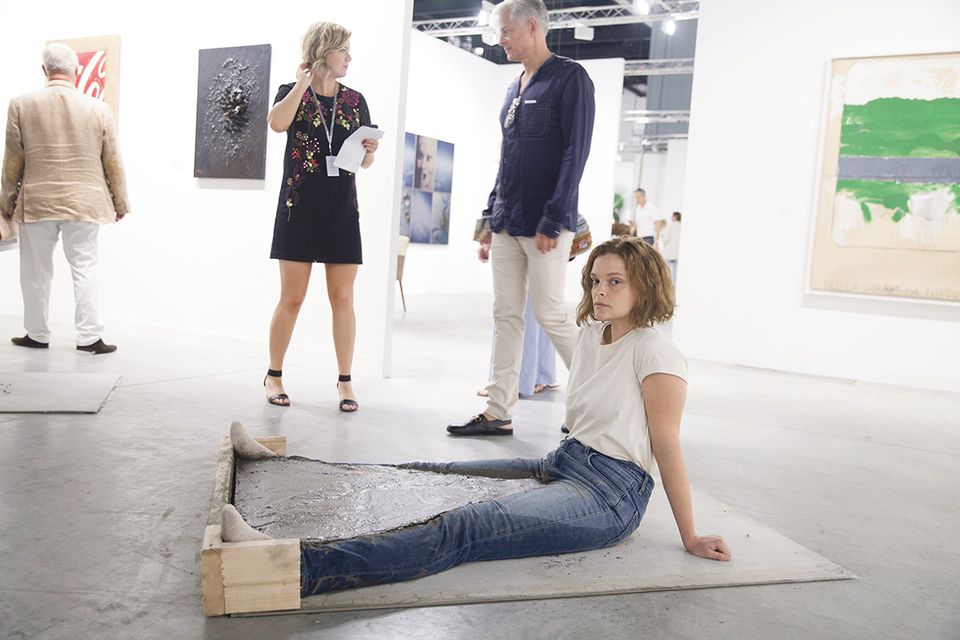 From setting up a mini studio to exploiting the peculiar dynamics of the art-fair environment in live works, artists are in situ on several stands at Art Basel in Miami Beach, carrying out a kind of pointed, performative labour that highlights the politics of production.

On the stand of the Mexico City-based gallery Proyectos Monclova, the duo Tercerunquinto (Gabriel Cázares and Rolando Flores) are working on a large-scale wall painting throughout the fair. It is part of an ongoing project, begun in 2009, called Restauración de una pintura mural, which grapples with politics, urbanism and memory. 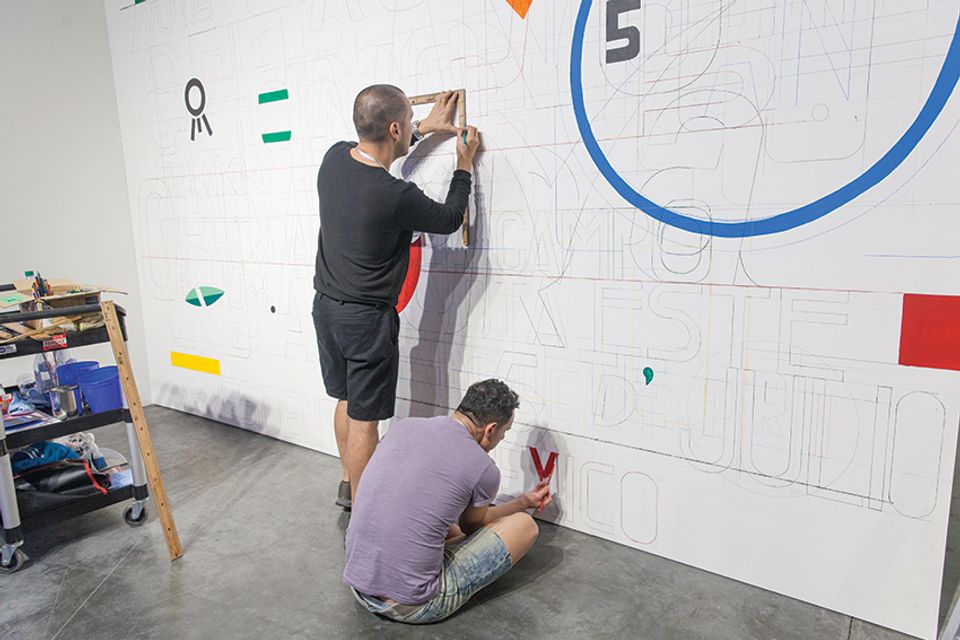 Nodding to the traditions of Mexican muralism, the artists are reproducing logos and slogans from previous election campaigns, of the type splashed on public walls in Mexico. This is the first time that the artists have worked on the spot; Cázares says that a commercial art fair seemed an interesting place to “acknowledge and make visible the many systems in which we are all operating”. The mural was acquired by a Mexican institution during the VIP preview on Wednesday.

The Irish-US performance artist Máiréad Delaney attracted curious onlookers to the stand of the New York-based gallery Fergus McCaffrey with a piece entitled Stoppage I, for which she sat and laid immobile on the floor with 200 pounds of wet concrete between her legs until it set—a process that took around five hours. She conceived the work with the fair in mind; two resulting body casts are on offer for $7,000 each.

“I think a lot about agency and objectification in my practice,” Delaney says. “I chose such a social space [for this work] because of what happens under the surface.” Those dynamics were lost on the half-dozen men who, perhaps jokingly, asked the gallery’s representatives whether the artist came with the work.

The video and performance artist Kalup Linzy, in drag as his character Katonya—a hard-working artist who has yet to succeed commercially—has set up a work table on the stand of Miami’s David Castillo Gallery. For an hour each day, Katonya is producing collaged and painted portraits of other characters in Linzy’s pantheon of alter egos, priced at $2,500 each. 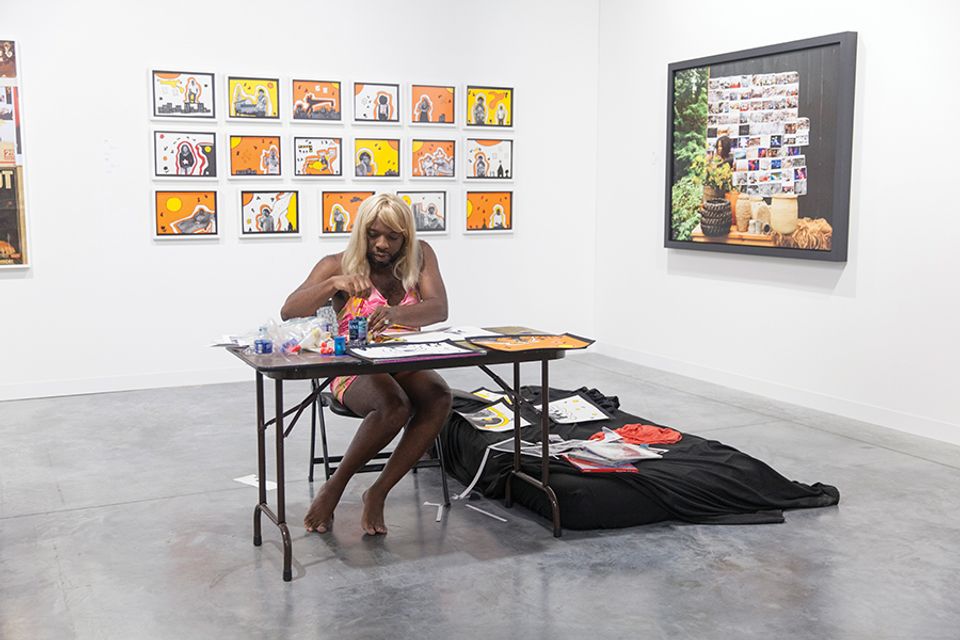 Although process and performance artists have been engaging with art that exposes its own making since at least the 1960s, they rarely have the luxury of doing so at fairs, where the imperative to sell objects reigns supreme. But Noah Horowitz, Art Basel’s Americas director, thinks this is changing. “We saw a lot of material with themes of labour and production in the applications this year,” he says. “It’s a ripe political-social moment.” Moreover, he adds: “As galleries get more comfortable showing at fairs, they’re using their stands as alternative exhibition platforms, where they can take more risks and mount more ambitious projects. We want to create the right environment for that to happen.”

Some artists are taking matters into their own hands. The California-born artist Ramiro Gomez has paintings on cardboard hanging on the wall at P.P.O.W gallery, but the artist—the son of a janitor and a truck driver, both immigrants—felt that his presence was also necessary, via a project he titled Just For You. After gathering up boxes discarded after the fair’s installation, he set up a “studio” in one corner of the stand and is painting small portraits on cardboard of maintenance workers at the fair. “It’s devoted to all the labour happening here,” he says. Gomez is giving the portraits to his subjects, for free. 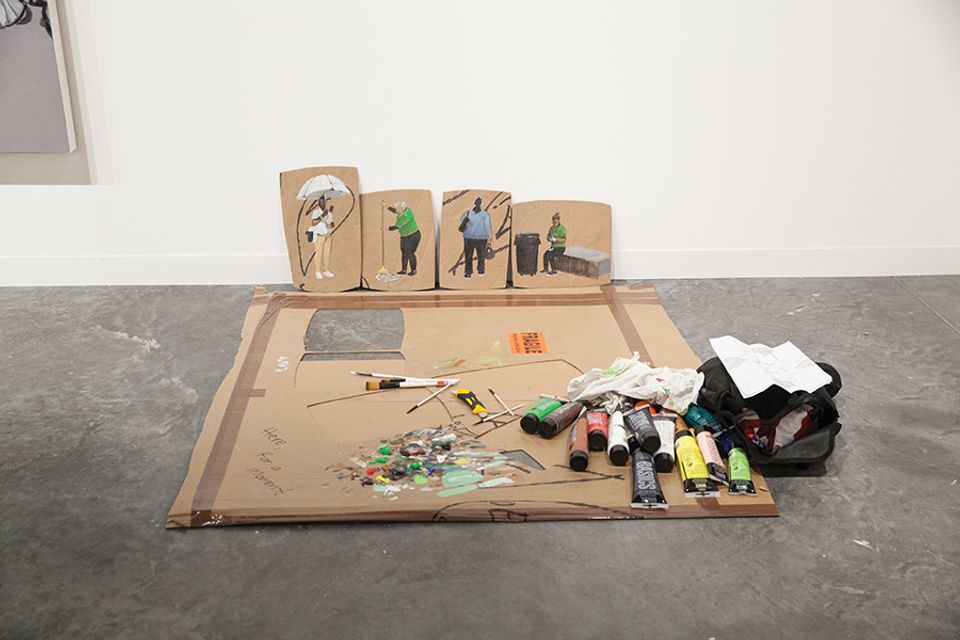