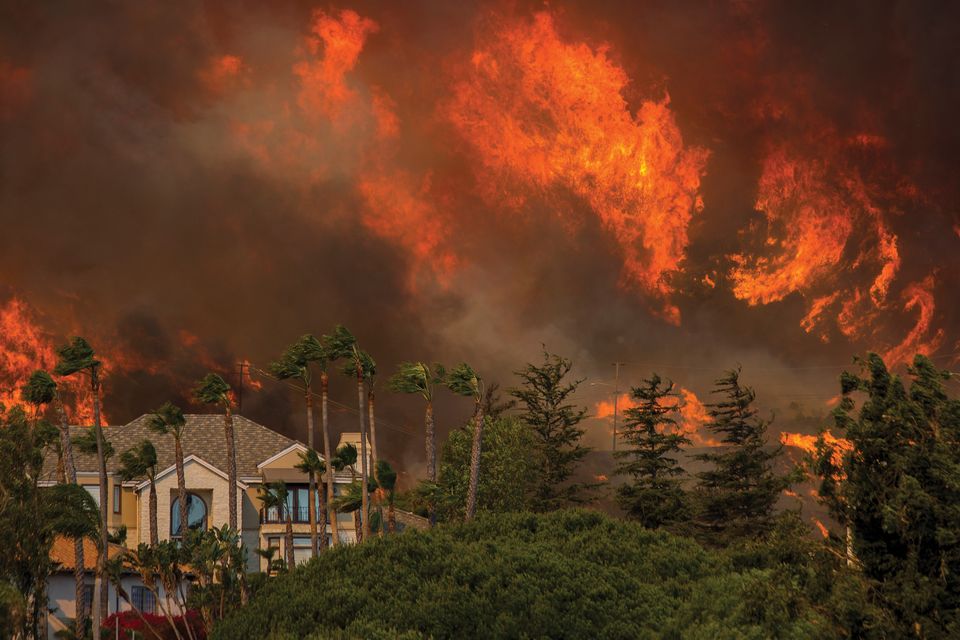 The Woolsey Fire approaches homes on November 9, 2018 in Malibu, California. About 75,000 homes have been evacuated in Los Angeles and Ventura counties due to two fires in the region © David McNew/Getty Images

The city of Malibu and the surrounding area is a mix of blue collar and high society, home to bohemians and movie stars. Artists have long been a part of the beachside community, and they were among those hardest hit by the Woolsey Fire, which has burned nearly 100,000 acres north-west of Los Angeles.

Lita Albuquerque’s phone rang at 5.45am on Friday 9 November: it was her son, asking if the artist and her husband were OK. He was unaware that the pair had spent the previous night far from their Malibu home, at the Standard Hotel in Downtown Los Angeles, celebrating an anniversary. At 7am, Albuquerque got a panicked call from her daughter Jasmine, a dancer and choreographer, who lived with her and was eight months pregnant. She told her mother that she had fled Malibu, taking only the dog, and was driving south on the Pacific Coast Highway.

A week after the fires began, Albuquerque was finally able to return to her home of almost 30 years. It was “just rubble,” she says. “We had nine structures; everything burnt to dust.” Albuquerque’s home and studio were gone and, with them, a lifetime of art and archives: paintings, sculptures and drawings, as well as her extensive library and five decades of diaries. Also lost was her pigment collection including the bright-blue ultramarine that Albuquerque uses in her work, which spans the Light & Space movement, land art and installation. “It’s so bad that it’s OK,” she says. “We have our lives and the dog.”

Samantha Thomas also received an early-morning alert about the fires in the form of a text from her girlfriend in New York. “I walked outside, turned left and there’s huge plumes of smoke,” she recalls. She packed an overnight bag and left with her roommate. “We both thought we would return.” But before that could happen, Thomas got confirmation that the home overlooking the ocean where she has lived for the past year was gone. “I watched my house burning on CNN,” she says. “On loop.” Thomas—whose abstract paintings incorporate sculptural elements—says she feels fortunate to have lost only her work. “I’m unscathed,” she says.

The fire was as unpredictable as it was destructive, reducing some houses to ash but leaving neighbouring ones untouched. When the artist Chuck Arnoldi saw the smoke rolling over the hills towards his house on Little Dume Beach, he began moving his art collection outside. Works by Ken Price, Billy Al Bengston, John Chamberlain, Joe Goode and others sat next to the house, ready to be trucked away should he need to evacuate. Although the fire got within a few hundred yards of the house he designed and built 35 years ago, the building was spared. “If I lived more inland, I would have left,” Arnoldi says, “but because we’re right on the ocean, 40 feet above the sand, we stayed.”

Others living on Point Dume were not as fortunate. The gallerist Michael Kohn lost his beach home, a 1959 ranch-style house, along with art by Antoni Tàpies and Peter Schuyff. “My house had a metal roof, which collapsed to the ground,” Kohn says. “Now it looks like a Gehry sculpture.”

The collector Shepha Vainstein lost the home that her husband Cal built in 1980, employing local stonemasons to construct a façade made from nearby riverbed rocks. Also destroyed were several works by Dora De Larios, a Los Angeles-based ceramicist who died earlier this year just before her retrospective opened at the Main Museum in Downtown Los Angeles. A few of her tiles survived, although Vainstein says they’ve changed colour as a result of the heat. The home’s rock façade was all that was left standing. “It was magnificent,” she says of the ruin. “As painful as it was, it was a tragic beauty.”

Some collectors frantically contacted art handlers in the hope of protecting their collections. Ben Milch of Secure Installations says he had packed and moved five collections over the course of six days. “I’ve been doing this ten years, and it’s definitely one of the weirdest and most memorable weeks,” he says.

Others stayed behind, ignoring evacuation orders, to fight the fires themselves. “The sheriffs said, ‘We can’t force you to evacuate,’” Gisela Colon says. “We stayed and I’m so grateful that we did, because I know we would have lost everything.” The second-wave Light & Space artist turned several garden hoses on her Hidden Hills house, dousing it with water to keep the fire at bay. Although some trees and her fence were singed, her collection including works by Mary Corse, Helen Pashgian, and DeWain Valentine was safe. “It was not about saving my home, it was all about preserving the art,” she says.

Pierpaolo Barzan, the founder of the arts non-profit Depart Foundation, loaded up his car with whatever works would fit when he left his family’s home near Zuma Beach the day the fires started. Works by Zoe Leonard, Joe Bradley and Frances Stark were shepherded to safety, while a piece by Francesco Clemente was left behind, only because of its large size.

Fortunately, some of his neighbours stayed behind and they prevented the fire from progressing past his backyard. Barzan lost some outdoor sculptures, but his house only suffered from smoke damage, making him one of the lucky ones. “On my street, 50% of the homes are gone,” he says.

Although almost everyone we spoke to acknowledged that the landscape of Malibu makes it especially prone to fires, none expressed a desire to leave. On the contrary, they seem more attached to the area, with some like Kohn saying they are already committed to rebuilding. They cited the community, as much as the natural wonder, as their motivation. “Now the fire that’s raging is the love that I’m feeling from everyone, just pouring in,” Albuquerque says. “That part is beautiful.”