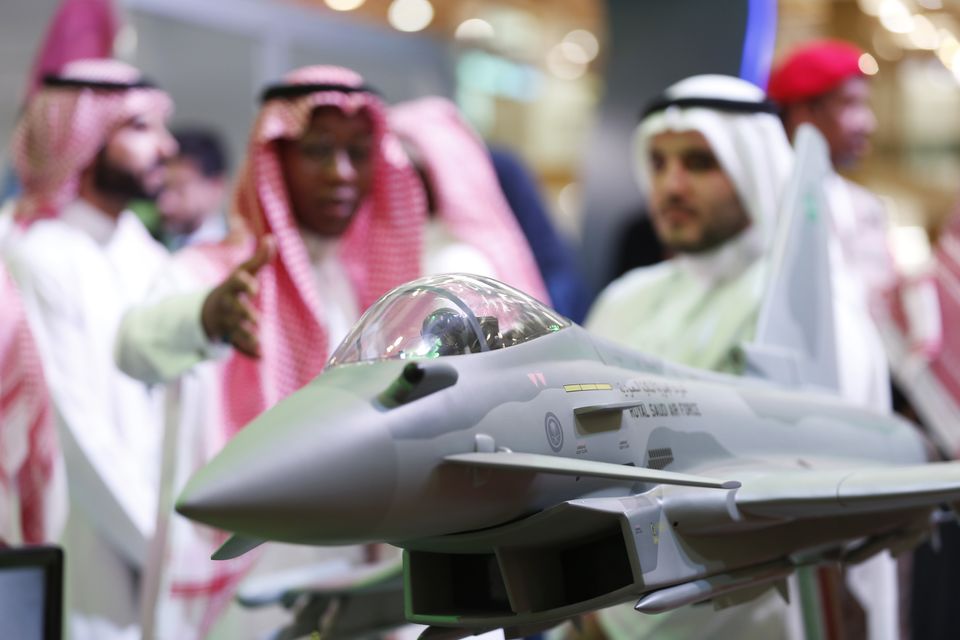 Visitors look at a display model of a Saudi Air Force Eurofighter Typhoon jet, manufactured by BAE Systems Plc, at the Armed Forces Exhibition for Diversity of Requirements and Capabilities (AFED) in Riyadh, Saudi Arabia, on 27 February. Mohammed Almuaalemi/Bloomberg via Getty Images

Artists are withdrawing from the Great Exhibition of the North (22 June — 9 September) after it recently announced that BAE Systems, Britain’s biggest arms dealer, is one of its main sponsors. The firm has been accused by a leading charity of “profiteering from the deaths of innocent children”, having reportedly contributed to the sale of weapons worth more than £6bn to Saudi Arabia during the ongoing war in Yemen.

Emily Hesse, a ceramicist based in the north of England, says she had no idea about BAE Systems’s role when she signed up to the arts festival last year. The arms manufacturer has more than 18,000 employees based in the region. “There is no way I would have been involved had I known about the sponsorship. I imagine many artists are struggling with this,” she says. The Leeds-based arts group, Commoners Choir, and the musician Nadine Shah have also pulled out.

Hesse says BAE Systems’s sponsorship is “being offered to marginalised communities to somehow enrich their lives at the expense of the lives of others overseas. They obviously thought we wouldn’t question this. But we have”. Hesse’s ceramic sculptures were due to be shown at the Great North Museum in Hancock. The multi-venue, 80-day exhibition also includes works by the Turner Prize winner Lubaina Himid, Antony Gormley and Ryan Gander, among others.

A group of arts professionals including Hesse, fellow artist Jill Gibbon, whose work explores the arms trade, and the curator Sara Makari-Aghdam have now launched a petition calling on Sarah Stewart, the chief executive of NewcastleGateshead Initiative, which led the bid to secure the exhibition, to refuse BAE Systems’s sponsorship.

Makari-Aghdam says she is “deeply horrified” by BAE Systems’s involvement “knowing how and who they have profited from as a company”. She adds: “Cultural producers have a social responsibility to uphold; this sponsorship has ruined what ought to be a positive celebration of our region.”

More than 600 people have so far signed the open letter, which condemns BAE Systems’s sales to Saudi Arabia, which has led airstrikes in Yemen, “bombing schools, markets, hospitals and health centres”, they say. “The conflict has killed or injured more than 5,000 children, while survivors face malnutrition and disease with the collapse of infrastructure.”

The petition concludes: “The Great Exhibition of the North claims to offer ‘family-friendly fun’. This is totally at odds with its with association with BAE Systems.” The exhibition’s organisers and BAE Systems did not respond immediately to requests for comment.

In response to concerns raised by BAE Systems’s sponsorship, Gary Verity, the chairman of the Great Exhibition of the North, says delivering an event of this scale “is only possible thanks to the support and participation of public and private sector organisations alike”.

He adds: “BAE Systems is supporting the exhibition as part of its commitment to address the UK skills shortage by encouraging more young people to consider science, technology, engineering and maths (STEM) careers.

“Organisations such as Arts Council England and Heritage Lottery Fund meanwhile, are supporting the delivery of our artistic content, including the walking trails and commissions, concerts and exhibitions at BALTIC and Sage Gateshead.”

UPDATE: This story was updated to include comment from Sara Makari-Aghdam and Gary Verity.