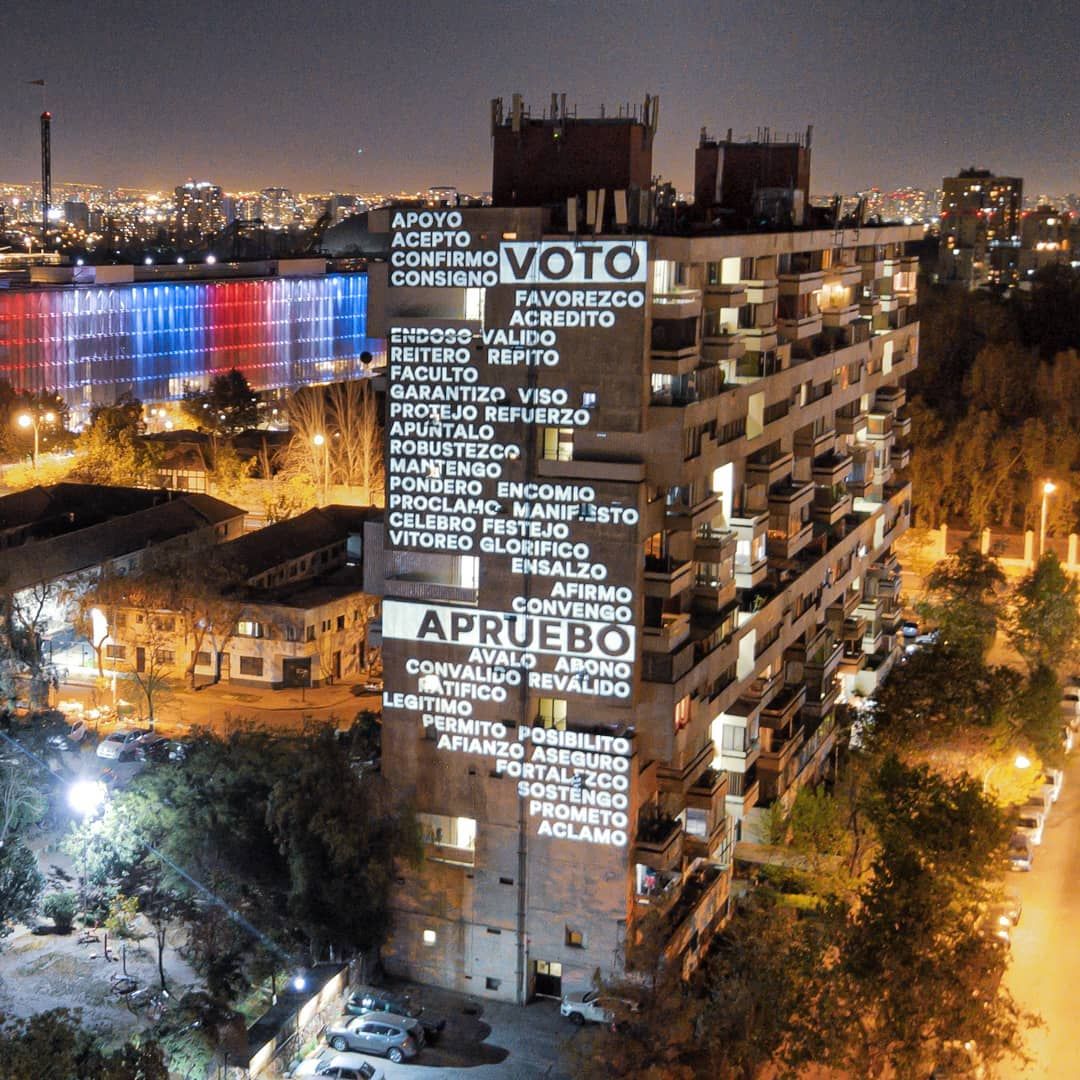 An "artivism" intervention by the Chilean design duo Delight Lab, projected on the side of one of Santiago's landmark Modernist Remodelación República apartment buildings, urges citizens to vote for a new constitution Photo: @delight_lab_oficial on Instagram

Check Galería CIMA’s website on a normal day and you will find a livestream view of Santiago’s Plaza Italia, with cars swirling around a recently repainted equestrian statue. On days marred by demonstrations and violent clashes, the traffic island—popularly rechristened Plaza de la Dignidad, or Dignity Plaza, after the mass protests that gripped the country starting on 18 October 2019—is transformed into Chile’s Tahir Square.

On 25 October, Chile’s citizens will choose whether to keep an Augusto Pinochet-era constitution or a draw up a brand-new legal blueprint from scratch. In anticipation of that vote, thousands marched last Sunday to celebrate the first anniversary of national protests in South America’s most prosperous and unequal country. As crowds streamed by, Galería CIMA beamed out images of Chile’s tumultuous protests in real time from its 11th floor perch, just as it has for more than a year, converting the four-year-old gallery into the de facto eyes and ears for Chile’s activist movement.

“The truth is we never imagined the reach we would have or what our live streaming would mean for the protest movement,” Galería CIMA’s Trinidad Lopetegui said in a recent interview. “We spent days on our terrace, broadcasting via YouTube and Instagram Live, and we got used to the tear gas, the fear, the uncertainty, the anger, the frustration, and the pain at seeing so much violence and injustice. This eventually brought us around to [working with artists] to generate works with light in the public realm… enabling us to visualise social demands while generating critical spaces that are open to ritual and poetry.”

Among the artists Lopetegui worked with was the duo Delight Lab, a design and public art outfit that has courted censorship from the government of President Sebastian Piñera by regularly beaming the words “Hunger”, “Democracy”, and “Dignity” in light onto some of the city’s most emblematic buildings. In May, when the artists lit up the headquarters of Telefonica with the word “Humanity” mid-pandemic, they found they had touched a nerve: a vehicle under police escort directed floodlights at the building, effectively “erasing” the artists’ message. “They want to cover up the words,” the artists declared, “but not deal with the underlying problems.”

A third group to take up the mantle of such “artivism” is the critically acclaimed artist-run space Sagrada Mercancia. Located in downtown Santiago, away from the glass and steel towers of the city’s financial sector, Sagrada Mercancia chose to suspend all exhibitions when the unrest began, concentrating instead on providing first aid for protestors, producing masks and shields for personal defense, and engaging in civic and legal education. With the start of the pandemic, the gallery partners moved to establish a parallel organisation, SM Apoyo Mutuo, or SM Mutual Aid (@apoyomutuosm). Its expanded mission includes “food distribution, the payment of basic household bills for needy families, and direct economic aid” for those affected by the Covid-19 pandemic, much of it financed via crowdfunding.

These and other groups have followed in the footsteps of 1970s-era Chilean activist artists such as the Coectivo Acciones de Arte (C.A.D.A.) and Lotty Rosenfeld—the first distributed free milk in shantytowns; the latter turned the “+” sign into a protest symbol, as in “No + repression,” or “No more repression”. According to Delight Lab, what makes the duo’s work different is their reliance on digital networks. “Yes, we do artivism,” they admit, but with a social media twist.

Delight Lab, Galería CIMA, and Sagrada Mercancía are hardly alone in their adoption of activist digital strategies. Along with other contemporaries, they have harnessed Chile’s multipronged crises to nimbly fuse art and politics, even under lockdown, to web-savvy, conceptually sound, politically practical ends.