A look at how the market is responding to the epidemic 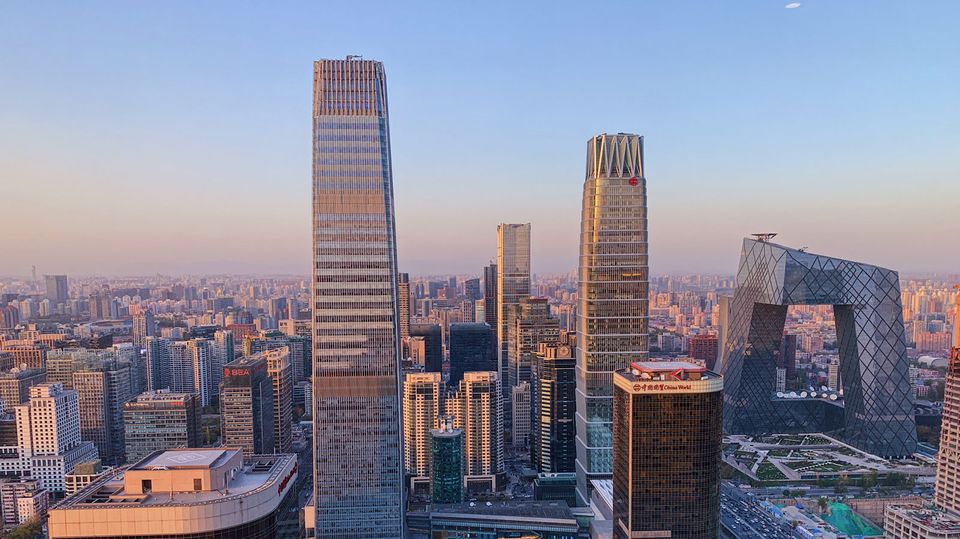 Beijing’s Jingart today announced the cancellation of its third edition, originally scheduled to run 21-24 May at the Beijing Exhibition Center, due to the ongoing uncertainty around the virus and its containment. Beijing, which to date has seen 396 confirmed cases of the illness including four fatalities, last week joined the handful of Chinese cities that have instituted mandatory 14-day home-quarantines on all incoming travelers, regardless of prior itinerary and whether or not they have had known contact with infected persons. Jingart, which is organised by the team behind the Art021 Shanghai Contemporary Art Fair in November, says in the statement that it consulted with a number of relevant experts and decided to prioritise health and safety. "It was an extremely difficult decision for the team to cancel this year's Jingart. Based on all the uncertainties and advice we gathered from different experts, in consideration of the health and safety of all the exhibitors, partners and the general public, we deliberately made the decision." Meanwhile, Art Chengdu is still considering whether to hold its third edition, slated to open in the Sichuan provincial capital at the end of April.

The move follows the cancellation of next month’s Art Basel and Art Central fairs in Hong Kong as a result of the epidemic, which has been greeted with sadness and resilience by Hong Kong galleries. They are now trying to salvage what is normally the busiest month of the city’s art market calendar.

The Hong Kong Art Gallery Association (HKAGA) announced in mid-February that: “Despite the cancellation of major art fairs in town, we are actively reaching out to other cultural institutions for various collaborative opportunities that stretch from March to May.” It added that after taking into account health and safety, and consulting with member galleries, it had postponed Art Gallery Day (planned for 19 March) to 3 April and South Island Art Day (scheduled for 16 March) to 4 April.

HKAGA is also in discussion with the Asia Society Hong Kong Centre (ASHK) to plan a one-month outdoor sculpture and installation art exhibition starting on 26 March, with a “full-day art talk programme and picnic” at ASHK on 28 March.

This is a slight departure from a statement released by HKAGA at the end of January, which said: “Provided a healthy and safe environment within the city, the HKAGA will do its utmost to make March’s art week as eventful as possible, even if Art Basel Hong Kong 2020 should be cancelled.” It went on to criticise the “often myopic and narrow coverage or comments from abroad”.

A week after that statement was issued, on 6 February, Art Basel did cancel the eighth edition of its Hong Kong fair, which had been scheduled for 17 to 21 March. 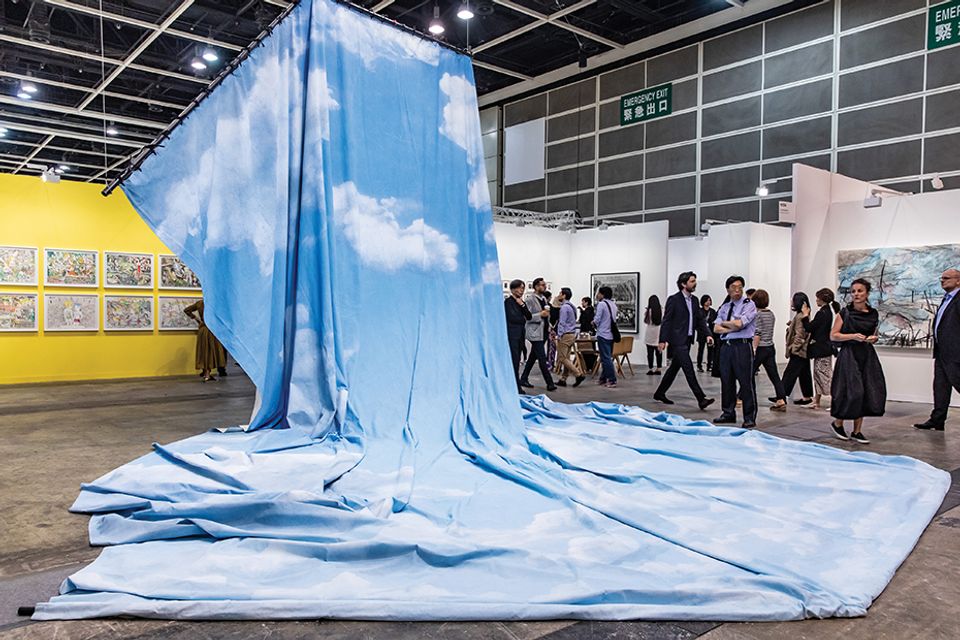 In a letter to exhibitors, Marc Spiegler, Adeline Ooi and Noah Horowitz—Art Basel’s global director, Asia director and Americas director respectively—said there was “no option but to cancel”. With a postponement considered but rejected, exhibitors were promised a 75% refund of their stand fees.

The decision came a week after the World Health Organization had declared coronavirus a global emergency and three weeks after 24 leading galleries, including Lévy Gorvy, Lisson and Paula Cooper, had written a letter to the Art Basel in Hong Kong organisers, urging them to cancel and expressing concern over a drop in the number of collectors and patrons attending, as well as threats to freedom of expression due to increased Chinese control in the semi-autonomous region.

The day after the Art Basel decision, Art Central announced via Instagram that it was cancelling its planned fair (scheduled 18-22 March), while Christie’s moved its inaugural 20th-century and contemporary art evening sale in Hong Kong (scheduled for 19 March) to May, along with its wine sale. At the time of writing, Sotheby’s still plans to go ahead with its spring sales series in Hong Kong (3-8 April). Meanwhile, David Zwirner has scrapped its Luc Tuymans exhibition at its Hong Kong gallery in March, and Gagosian has postponed a show of Jenny Saville’s new work, although new dates have not been given as the Hong Kong gallery remained closed at the time of writing. 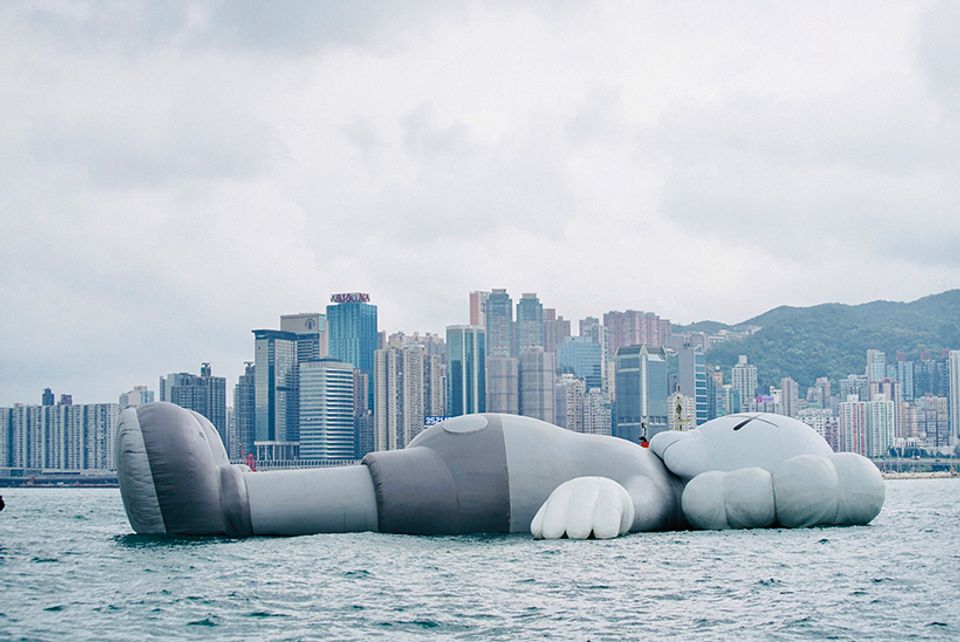 Companion, an inflatable by KAWS, was a major attraction during Hong Kong’s art week last year Courtesy of @KAWS

But elsewhere in Asia, ALT Philippines (14-16 February) in Manila went ahead. A spokeswoman said: “For prevention measures, each booth had masks to give away and hand sanitisers, although not many people wore masks.” She added: “The most marked difference is that none of our foreign guests were able to come.”

In Singapore, a local dealer says some—but not all—galleries in Gillmann Barracks are now open by appointment only and others are taking precautions. For instance, STPI Gallery’s invitation to the opening of Genevieve Chua’s Twofold on 21 February stated: “All visitors entering STPI premises must complete a temperature-screening exercise and a health declaration form upon entry, and STPI reserves the right to deny entry to any visitor(s) showing signs of illness or a temperature above 37.5C.” It added: “Please refrain from attending any form of public gatherings if you are feeling unwell, have come into close contact with a confirmed COVID-19 case since 7 February 2020, or have visited mainland China in the past 14 days.”

Further afield, Christie’s and Sotheby’s have postponed their New York spring Asian Art Week sales from March to June, with the exception of their South Asian Modern and contemporary art sales. In Europe, a spokeswoman for Tefaf Maastricht (7-15 March), which has made efforts in recent years to encourage collectors, museum representatives and press from China to visit, says: “We unfortunately will not be able to welcome select visitors and journalist who are restricted by visa and travel restrictions [in their own countries].” She adds Tefaf is evaluating “the best possible security and safety measures” for the fair.

Ben Clark, who was based in Hong Kong as deputy chairman of Christie’s Asia until he joined advisory firm Gurr Johns as deputy chief executive last year, says: “It’s a tragedy for Asia, for China, for Hong Kong. Everyone is very worried. In Hong Kong I have clients who have stayed in their homes for weeks at a time [for fear of infection].” Coronavirus and the Art Basel in Hong Kong cancellation will, Clark thinks, “restrict the whole Asian market for at least six to eight months. It’s like pressing a pause button on the whole cultural scene in Asia. We will have to see where we are at the end of the year.”