Officials raised concerns that the festival was promoting an LGBT agenda 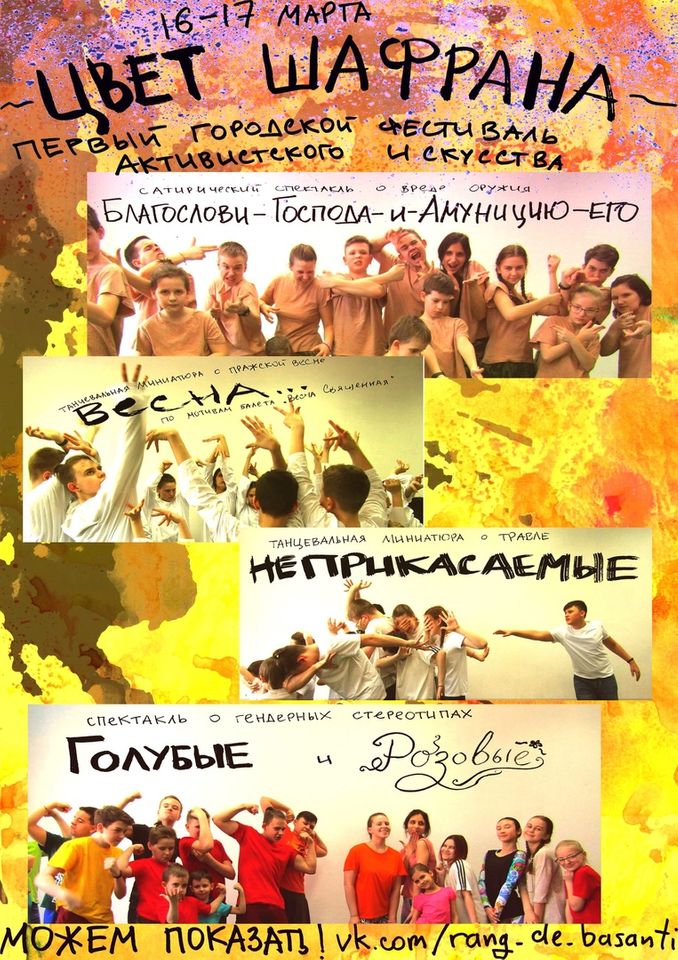 A poster from the social media page of the Colour of Saffron Festival in Komsomolsk-on-Amur, Russia

An activist youth arts festival in Komsomolsk-on-Amur in the Russian Far East has been cancelled after authorities raised concerns that it was promoting an LGBT agenda, apparently because of a play called Blue and Pink that was meant to spur discussion of gender stereotypes.

The Colour of Saffron festival had been scheduled for 16 and 17 March after being postponed in February when it was turned away by a state youth center. Organisers said in social media posts that the owners of a replacement venue had been accused of “attempting to illegally hold an LGBT event” and that the police had questioned students at a local school who were scheduled to participate.

In Russian, the words “blue” and “pink” can be used to signify gay and lesbian.

“That’s it, our festival is canceled,” read a post today on the festival’s page on VKontakte, a Russian social network. “This was done by the local administration–they are so carried away with fighting windmills that they see propaganda in the art of children. They are accusing our director, Yulia, of having lived in Europe and brought perversion and propaganda from there. We are in shock.”

It adds that the city, in the Khabarovsk region, has turned into a place where “they have not heard of human rights and where the names of colors are regarded as propaganda”.

Russia passed a law in 2013 that aims to protect minors from “information promoting the denial of traditional family values” and “propaganda of nontraditional sexual relations.”

Yulia Tsvetkova, the director of the festival, wrote in a series of posts on her VKontakte page in recent days that she had been receiving online threats and been called in for questioning by police officers.

“I haven’t eaten or slept in three days–I’m on the verge of a nervous breakdown” she wrote on Wednesday. “I have only one question, why is someone so intent on sabotaging our small and peaceful youth festival. Can it be that youth activism so frightens our authorities?”

Today Tsvetkova posted that she now faces questioning by the juvenile justice police.

In addition to the play, the festival program included a fair of handmade crafts on activist themes and dance performances about the dangers of weapons and about the Prague Spring of 1968 in the former Czechoslovakia.