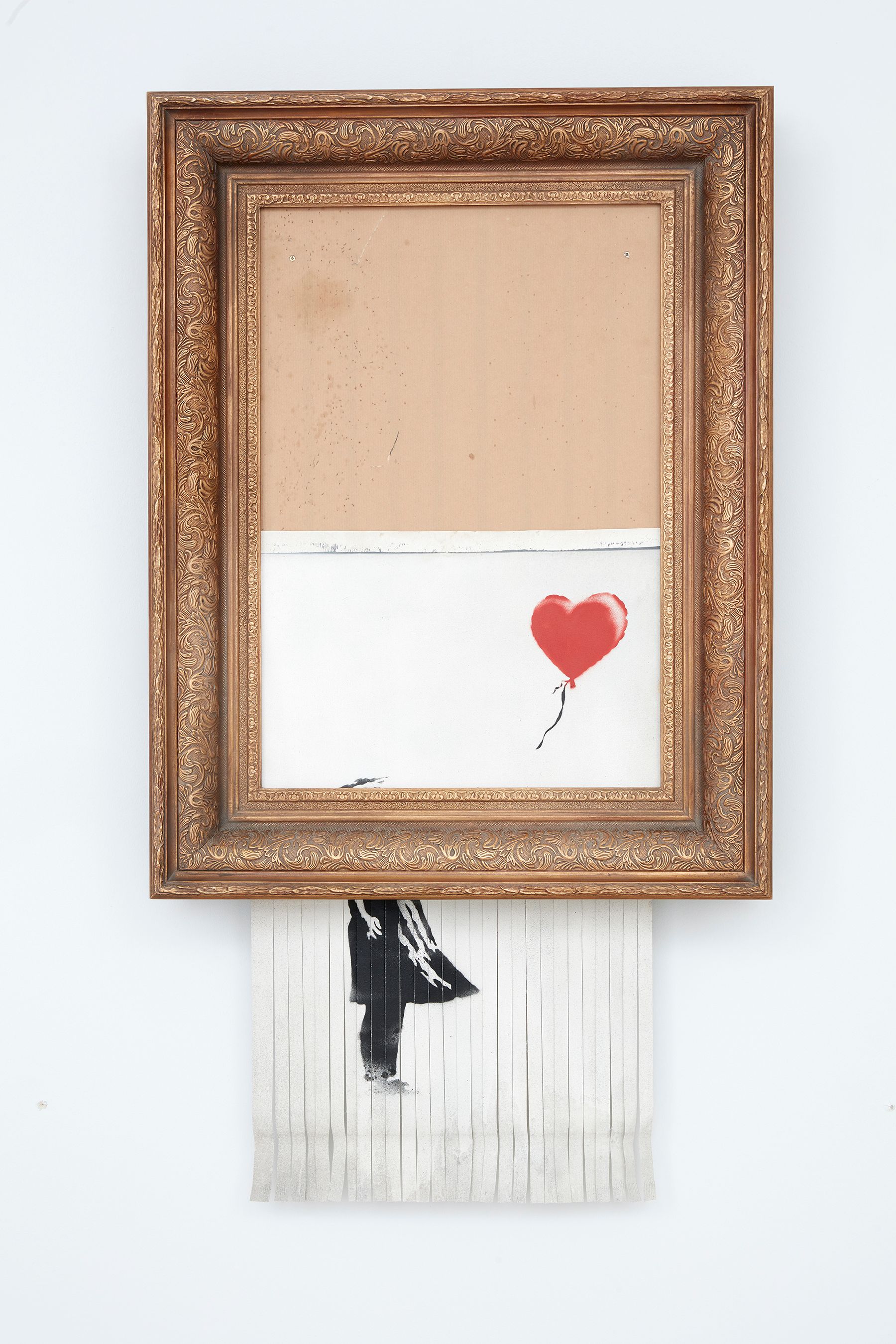 Banksy’s most (in)famous work—the canvas which shredded in its frame in a viral auction stunt at Sotheby’s—is going under the hammer next month with an estimate of £4m to £6m. The work, Love is in the Bin (2018), will be offered in the contemporary art evening sale at Sotheby’s London on 14 October.

The piece is described online as “spray paint and acrylic on canvas mounted on board, framed by the artist with remotely controlled shredding mechanism hidden in the frame”. No provenance details are given though The Art Newspaper understands that the work has remained in the same collection since it was bought three years ago at Sotheby's. The ripped canvas will go on show this weekend at the auction house’s New Bond Street Galleries before embarking on a global tour to Hong Kong, Taipei, New York, returning finally to London.

The piece, initially named Girl with a Balloon (2006) was the final lot of the night at an evening sale in Sotheby’s London in October 2018. Just as the canvas hammered at £860,000 (£1.04m with fees), an alarm was triggered inside the work of art. Onlookers turned just in time to see the canvas slip through its faux-gilt frame and partly shred into pieces.

Alex Branczik, the auction house’s head of contemporary art in Europe at the time, said: “Were we in on it? Absolutely not.” In a statement issued today, he says: “This piece is considered heir to a venerated legacy of anti-establishment art that began with Dada and Marcel Duchamp more than a century ago.”

After the headline-hitting event, speculation mounted that the elusive artist had himself pressed the button that destroyed the work. A week and a half after the stunt, Banksy posted a video to his website entitled Shred the Love, the Director’s Cut, which showed how the shredding mechanism was supposed to work. Banksy purportedly shows himself constructing the shredding mechanism inside a frame; at the end, a caption says: “In rehearsals, it worked every time.”

The shredded piece was later legally designated a new work altogether by Pest Control, the Bristolian street artist's authentication body, with Banksy renaming it Love is in the Bin (2018). The original bidder agreed to buy the new work for the same price it was hammered at in the room on 5 October 2018: £860,000 (£1.04m with fees). According to the provenance, Girl with a Balloon was acquired directly from the artist in 2006.

Sotheby’s described the buyer, an anonymous female European collector, as “a long-standing client of Sotheby’s”. In a statement, she says she was at first “shocked” when the work was shredded, “but gradually realised that I would end up with my own piece of art history”. In 2019, Love Is In the Bin was lent long-term to the Stuttgart Staatsgalerie

Banksy’s prices continue to increase at auction. In May, Sotheby’s sold the artist’s Love is in the Air (2005) for $12.9m (with fees; est $3m-$5m). The work came from a private North American collection; the buyer also had the option to pay the hammer price with cryptocurrency.