Moored besides the Pont des Invalides in Paris, Fluctuart will open with an exhibition by the Brooklyn-based artist Swoon 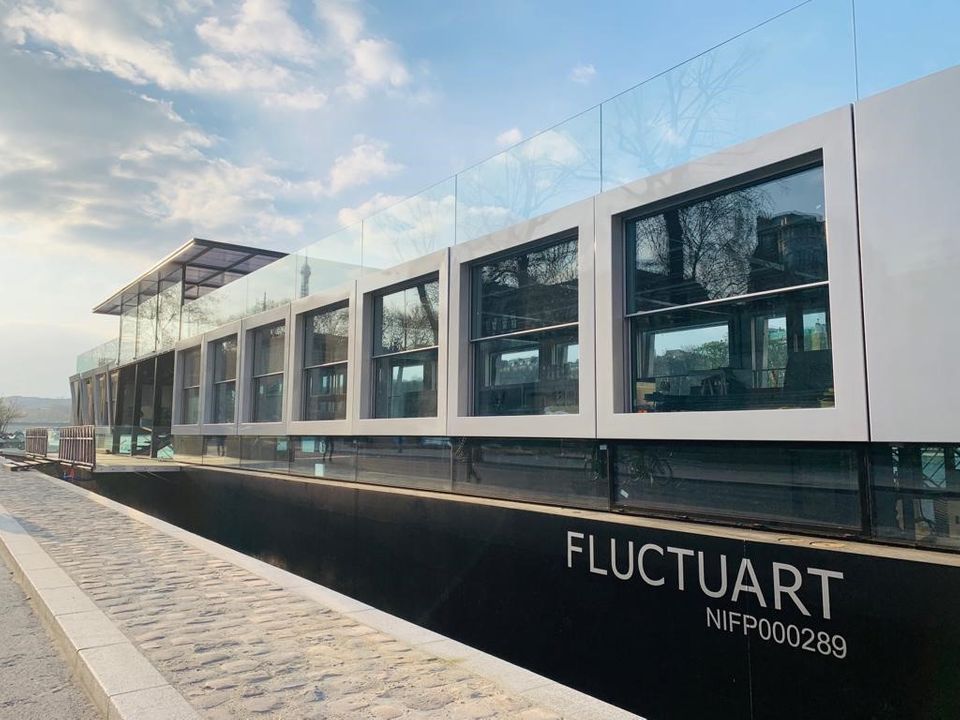 Fluctuart may look like a bateau-mouche, one of Paris’s typical tourist boats, but it is in fact the world’s first floating street art centre. Opening on 4 July after a slight delay, this three-level barge is moored near the Grand Palais and Petit Palais beside the Pont des Invalides. Its name derives from “Fluctuart nec mergitur”, the Latin motto of the French capital, meaning “it rocks but never sinks”.

Forty projects bid for the site in 2016 as part of the open-call design competition Reinventing the Seine, launched by the cities of Paris, Rouen and Le Havre. Géraud Boursin, the owner of Marcounet, a barge by Pont Marie that serves as a bar and concert venue, collaborated with the street art collector Nicolas Laugero Lasserre on the winning concept for Fluctuart.

The pair’s backer is the businessman Éric Philippon. The €4m project has no public funding but received additional support from the investment bank Bpifrance and the private equity firm Apicap, among other private sponsors.

The 1,000 sq. m barge was designed and built in Dieppe, Normandy, by Gérard and Matthieu Ronzatti, who are responsible for half the floating venues along the Seine. “Everybody wants to work with them, so we couldn’t be happier that they picked us in the end”, Laugero Lasserre says.

Fluctuart was conceived as a place to drop in, so admission will be free every day from midday to midnight. Much of its revenue is anticipated to come from paying events, the bar on the ground floor and the rooftop café.

“It is a risky model, when you are looking at €50,000 worth of exhibitions [a year]”, Laugero Lasserre says. He adds that Fluctuart will also be a “pedagogical tool for Icart”, a vocational school for cultural management where he teaches. Students will be volunteer tour guides for special exhibitions on the lower level as well as permanent displays on the ground floor. Site-specific installations will be a priority, Laugero Lasserre says. The inaugural exhibition by the Brooklyn-based mixed media artist Swoon (Time Capsule, until 22 September) is the result of her three-week residency on board.

The permanent displays now consist of 15 works, half of which belong to Laugero Lasserre and Boursin. The rest, including works by Banksy, JonOne and Rammellzee, are on loan from the collector Alain-Dominique Gallizia, who organised the 2009 exhibition TAG at the Grand Palais.

“We are considering opening an endowment fund so that Fluctuart will have its own collection,” Laugero Lasserre says. The centre also plans to partner with other street art museums, such as Mima in Brussels and Urban Nation in Berlin, for future exhibitions. The Swoon show is heading next to Muca in Munich.

Is a street art museum a contradiction in terms? Laugero Lasserre argues that while the movement comes from the streets, there is so much more to it; for instance, some artists prefer to work in studios. Artists are welcome to appropriate Fluctuart’s exterior as well as its galleries. The wall in front of the boat is designated a Unesco World Heritage site and cannot be painted over but the trees nearby are now covered with kniffiti (knitted graffiti). “At this rate, we will become the yarn bombing destination in Paris,” Laugero Lasserre jokes.