Highest price to date is $1.9m, but Steve Lazarides says some paintings have a £2m-plus price tag 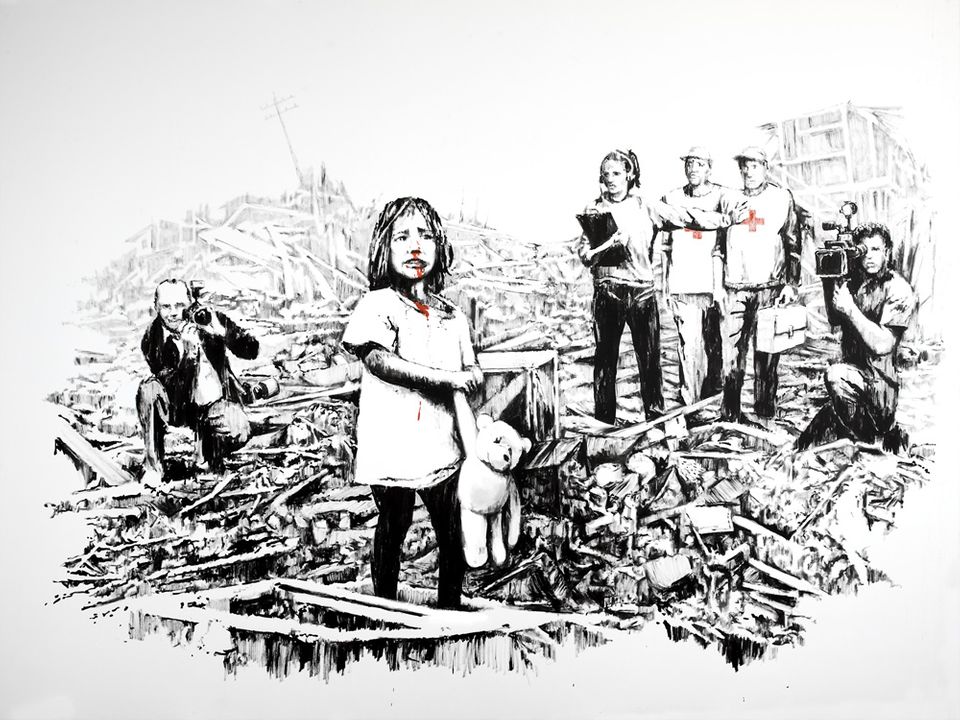 Steve Lazarides, the dealer who is credited with launching Banksy’s career, is organising a “greatest hits” show of the Bristolian street artist’s works this summer, including one-off paintings that he expects will sell for more than £2m.

Banksy’s auction record currently stands at $1.9m for a spot painting by Damien Hirst that the street artist stencilled over. At the time it sold, in 2008, the work failed to break the £1m mark. “I remember being gutted because if it had gone a little further, it would have been a million-pound painting,” Lazarides says, noting that he recently broke the million-pound barrier in a private sale.

Fast forward ten years and Lazarides looks set to make history. The “museum-style” exhibition of Banksy’s paintings created during the “golden years of 2002 to 2008” has not been sanctioned by the artist; nor does it need to be.

The show, which opens at his new Mayfair gallery Lazinc in the week of 9 July, consists of around 20 secondary market canvases and a similar number of prints. “This isn’t stuff that’s been taken from the street, or stuff that’s come out of his personal collection without him knowing. It’s all been sold before,” Lazarides stresses.

So what would Banksy think of the exhibition, organised by the dealer with whom he parted ways in 2008? “I haven’t even asked him, we haven’t spoken for a decade. He would probably hate it because he’s a control freak,” Lazarides quips, but adds: “As much as he might not sanction this show, I think in his heart of hearts, he would much rather his stuff be seen than it be locked away in vaults forever.”

Many of the works have not been seen since they were sold during exhibitions such as Turf War (2003), Crude Oils (2005) and the infamous Los Angeles show, Barely Legal (2006), which attracted around 50,000 people during its three-day run. Celebrity attendees included Brad Pitt and Angelina Jolie, who spent £120,000 on a painting depicting a white family eating lunch beneath an umbrella while 15 starving Africans look on and £40,000 on a sculpture.

Unique paintings such as Show Me the Monet (2005), showing two shopping trolleys and a traffic cone half submerged in a waterlily pond, and Media at War, which depicts a girl in the middle of a war-torn scene being papped by the media as medics are held back from tending to her, form the centrepiece of the London show, the first to focus on Banksy’s paintings since 2008. 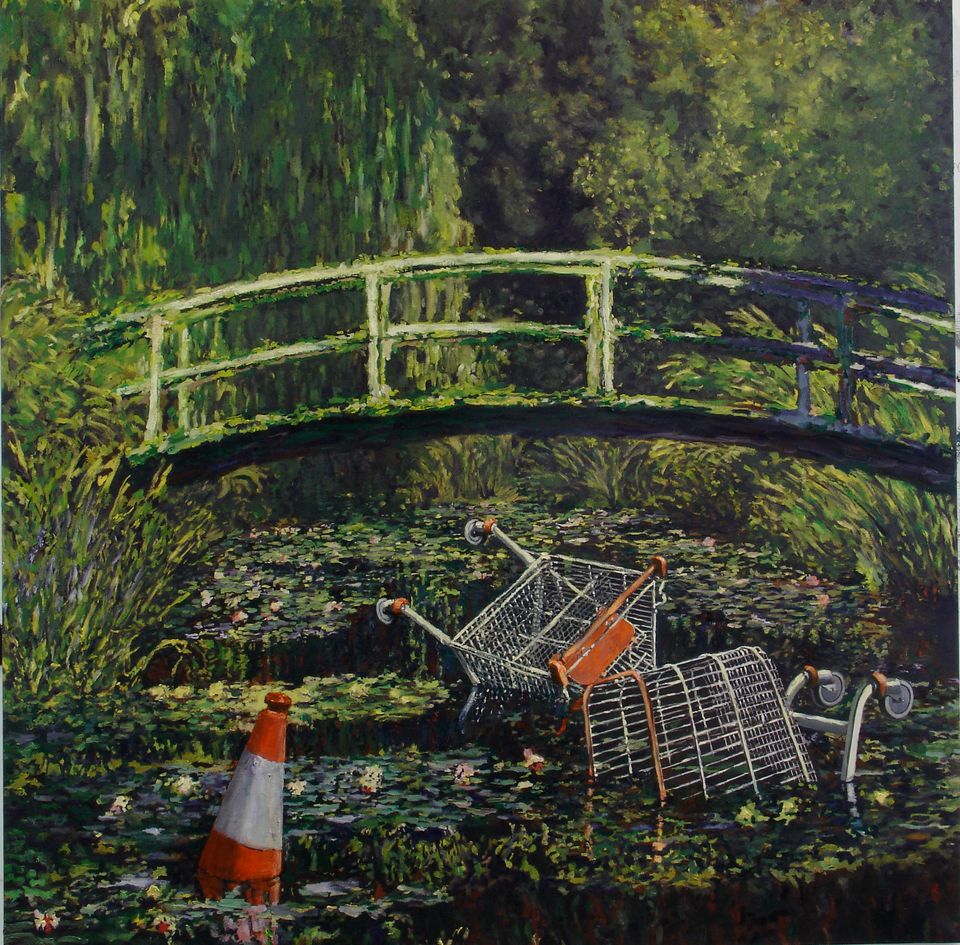 Banksy's Show Me the Monet Lazinc

Not all are officially for sale, but if their owners were tempted to part ways, the appreciation in value would be steep. Lazarides estimates the paintings to be worth at least £2m each, having sold for around £15,000 shortly after they were created. “I’m intrigued to see what the capacity for his work is now, and how hanging it in a Mayfair gallery changes the game,” he says.

A number of rare painting multiples, usually created in editions of 25, have also been sourced, including Girl With A Balloon and Flower Thrower. “These have become almost mythical canvases to find,” Lazarides says. He declines to name any of the ten collectors who have contributed to the show, apart from himself. 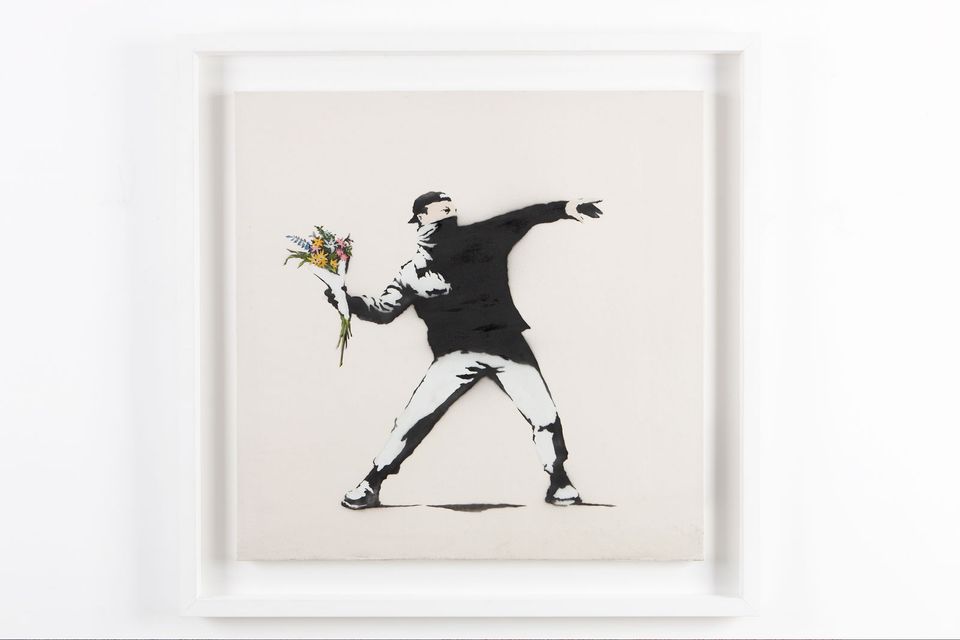 Lazarides recalls how the paintings were made in quick succession. “I remember being stood on Ganton Street when we did [the 2006 exhibition] Santa’s Ghetto. All 25 Girl With Balloons were made within 20 minutes. We just laid the canvases out on the floor, he was doing them, I was flipping them over and numbering them and taking them downstairs and selling them for £250,” Lazarides says. The same paintings can now fetch £500,000.

Despite Lazarides’s confidence that several works will sell for “record breaking sums”, he says the financial aspect of the show is secondary to “providing a museum service for all those kids and fans who genuinely want to see his work”.

He adds: “It’s going to be a roadblock. That’s what I really want it to be. Banksy belongs to the general public.”