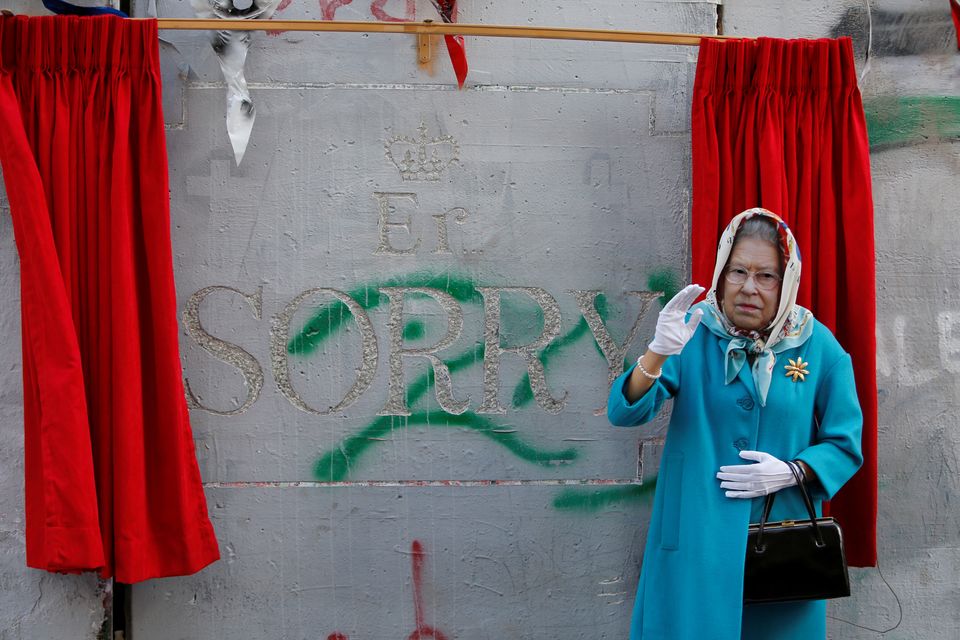 The British street artist Banksy invited 50 Palestinian children to a tea party this week in the occupied West Bank to apologise for the UK’s Balfour Declaration of 1917.

“Er SORRY” was engraved on the Bethlehem side of Israel's separation wall during his stunt marking the 100th anniversary of the declaration yesterday (2 November). A statement issued by Banksy says the work was commissioned from a professional stone carver whose previous credits include Buckingham Palace and Westminster Abbey.

An actor was hired to dress up as Queen Elizabeth II, while the children's party hats riddled with bullets and tatty British flags decorated the tables. The event took place outside the Banksy-owned Walled Off Hotel.

“This conflict has brought so much suffering to people on all sides. It didn't feel appropriate to 'celebrate' the British role in it,” Banksy says in the statement. “The British didn't handle things well here. When you organise a wedding, it's best to make sure the bride isn't already married.”

The Balfour Declaration, signed by then foreign secretary Arthur Balfour, endorsed the “establishment in Palestine of a national home for the Jewish people” and was the first step towards the creation of the state of Israel in 1948. The anniversary is being marked in London, where the British prime minister Theresa May is hosting her Israeli counterpart, Benjamin Netanyahu.

Meanwhile, Palestinians regard the Balfour Declaration as a betrayal that promised to give away their land to another people by a country that had no right to do so. Mahmoud Abbas, the Palestinian president, wrote an opinion piece in The Guardian this week asking Britain to atone for the declaration.