Banksy painting of chimps as MPs sells for record £9.9m at Sotheby's 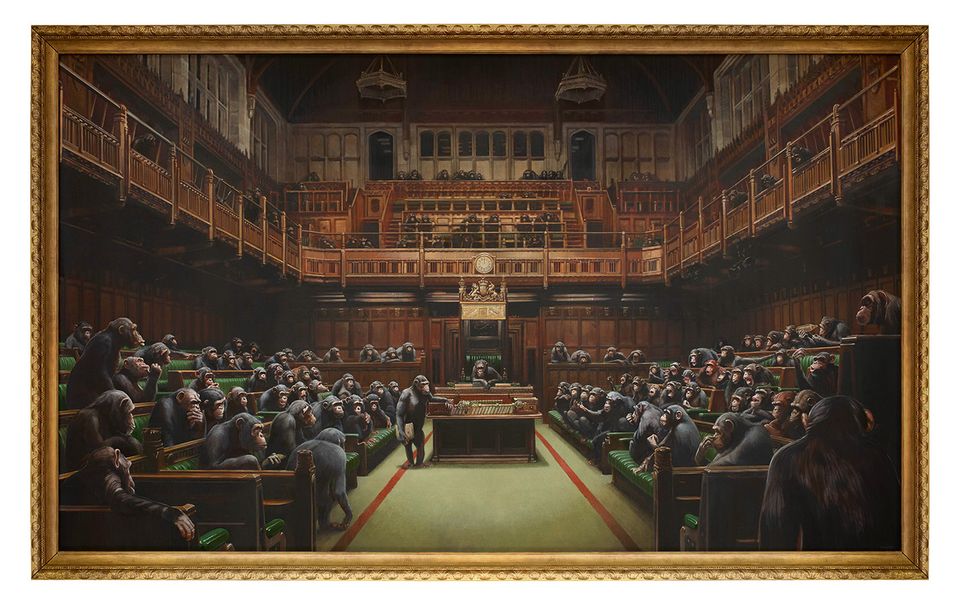 Pandemonium erupted at Sotheby’s in London on Thursday evening when at least ten eager collectors vied for Banksy’s 2009 painting, Devolved Parliament, showing a Commons chamber packed with chimpanzees, which rocketed to £8.5m (£9.9m with fees), smashing the artist’s previous record of £1.5m. The work was estimated at £1.5m-£2m.

After a spirited 13-minute battle in which bidding jumped by £1m increments at times, Sotheby’s head of sale Emma Baker won the 13ft canvas on behalf of an anonymous collector on the phone. Alex Branczik, Sotheby’s senior director and head of contemporary art, whose client narrowly lost out on the painting, said there had been global bidding, including from public institutions.

The Czech data analyst and collector Matyas Kodl, who was the underbidder at £8.4m, said he had been keen to acquire the work because it is “still so relevant today in terms of the political climate”. He added: “I was hoping the action was going to be a little calmer, but I suspected there would be a fair bit of interest.”

Kodl said his family were “great admirers of Banksy” and to have acquired a painting such as this for their collection “would have been a great joy for us all”.

The artist and collector Mike Snelle, one half of the Connor Brothers duo, said after the sale that he had a “feeling” the work would do well. “It was the right picture at the right time. It’s taken a long time for the art market to realise just how significant he is culturally.”

The canvas, Banksy’s largest ever, was consigned by a UK collector, but it would appear the artist is not behind the sale. Posting on Instagram straight after the auction, Banksy noted the record, adding: “Shame I didn’t still own it.” He went on to quote the art critic Robert Hughes, who said: “The price of a work of art is now part of its function, its new job is to sit on the wall and get more expensive… Suppose that every worthwhile book in the world cost $1m—imagine what a catastrophic effect on culture that would have.”

While the total value of Sotheby's evening sale was down 21% from that in October 2018, the average price rose 30% according to the analysts ArtTactic Courtesy of ArtTactic

The timing of the sale was impeccable, coming exactly four weeks before the revised Brexit deadline and a year after Banksy’s Girl with Balloon (2002) was shredded via remote control in the same saleroom. That work sold for £1.04m with fees after it was legally designated a new work by Banksy's handling service Pest Control and renamed Love is in the Bin a week after the auction in October 2019.

Devolved Parliament has also been renamed since it was shown at the Bristol Museum in 2009 under the title Question Time, with Banksy reworking parts of the canvas; two chandeliers have been snuffed out and a banana now curves down instead of up. Sotheby’s said it was aware of the amendments, although it is not clear when the revisions were made. “References to these changes were added to our online catalogue following confirmation from Pest Control,” the auction house said.

Security was extra tight on Thursday evening, with Sotheby’s taking every precaution to avoid a rerun of last year, particularly with representatives from Pest Control in the room. Stringent checks to the canvas and frame were undertaken prior to the sale, while the work was removed from the saleroom just before the auction began. “After last year, can you blame us?” said the firm’s head of security.

The Banksy result considerably spiced up an otherwise pedestrian sale, which made £45.8m (£54.7m with fees), squarely within its estimate of £40.4m-£56m. The joint top lot was Jean-Michel Basquiat's Pyro (1984), which also sold for £8.5m (£9.9m with fees), although that elicited far less attention, selling just below its estimate of £9m. With nine previous owners, the vibrant canvas was last on the market in 1998. “It’s a big moment when Banksy shares the top price with Basquiat,” Branczik said.

Other highlights included a 2015 painting by the US artist Nicole Eisenman, which started the auction with a bang, selling four times over estimate for a record £520,000 (£639,000 with fees) to Acquavella Gallery. Meanwhile, Italian post-war artists accounted for more than 30% of the sale, bringing in £13.1m. Sotheby's no longer holds standalone Italian auctions—that market has considerably cooled since the highs of 2014.

Denting an already reduced total compared with last year, three lots were withdrawn prior: a guaranteed Sigmar Polke painting, a creased canvas by Piero Manzoni, estimated at £4m-£6m, and a Cy Twombly work. In the end, the sale was 53.2% down on 2018; Brexit continues to be the biggest thorn in the side of auction houses when it comes to consigning. Who would have thought a year ago it would be a work by Banksy bringing some reprieve?

about 11 hours ago
Object lessons: from a rare outing for an Old Testament Rembrandt to a Bernini double act