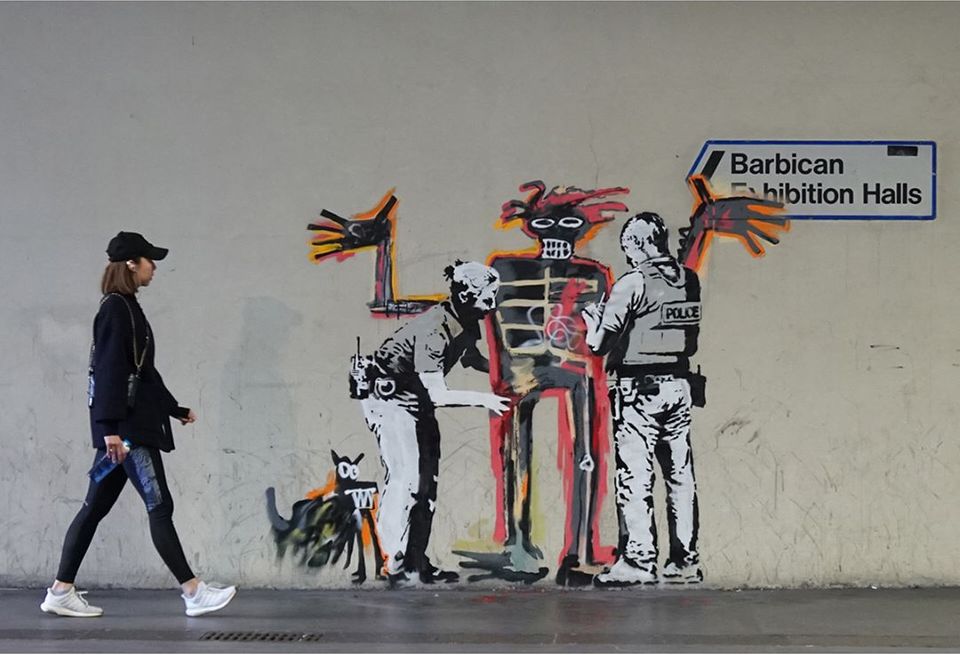 The Barbican Centre is “in discussion” with the City of London Corporation about how to preserve the two murals by the British street artist Banksy that appeared near the gallery on Sunday.

The works pay homage to Jean-Michel Basquiat, who was originally a graffiti artist and is the subject of a major show opening at the Barbican this week–almost 30 years after he died.

One mural depicts people queuing beneath a ferris wheel with crowns for passenger cars; Basquiat often signed his work with a crown or the tag SAMO (which stood for “same old shit”). Apparently mocking the Barbican’s zero-tolerance approach to graffiti, Banksy posted the image on his Instagram account with the caption: “Major new Basquiat show opens at the Barbican—a place that is normally very keen to clean any graffiti from its walls.”

The other painting is of a Basquiat-style figure being stopped and searched by police, a poignant reminder of how black men are subjected to racial profiling. Banksy posted this work with the caption: “Portrait of Basquiat being welcomed by the Metropolitan police—an (unofficial) collaboration with the new Basquiat show.”

Boom for Real, which is the first large-scale exhibition of Basquiat’s work in the UK, includes more than 100 works alongside rare photography, film and archive material.

A spokeswoman for the Barbican confirmed the Banksy works had been painted on Sunday and that the gallery is “in discussion” with the City about “how to care for the pieces”. She adds: “The exhibition, Boom for Real, looks at the life and legacy of Basquiat, including, as these [Banksy] works show, his continuing influence on artists working today.”