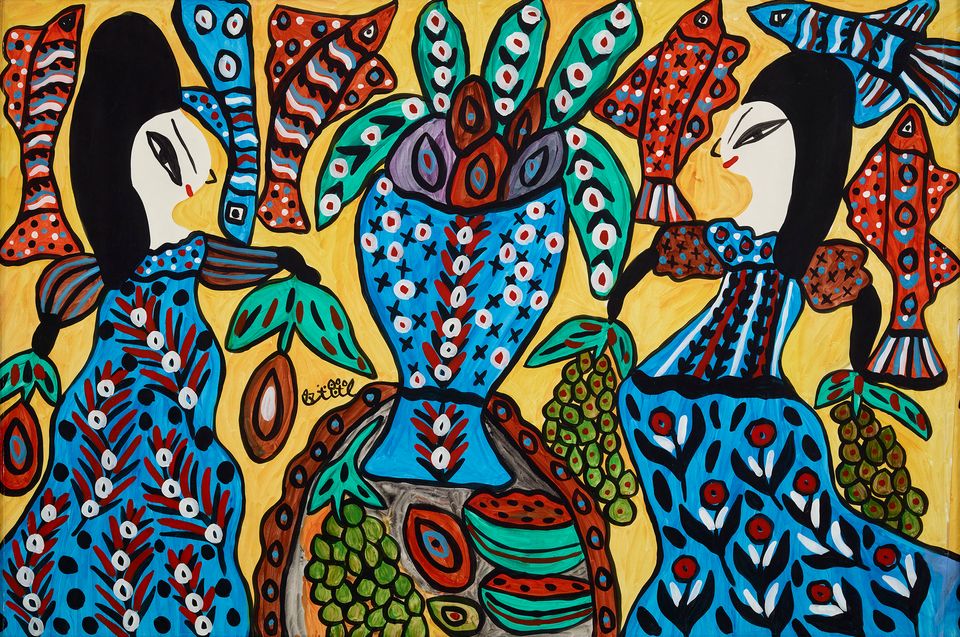 Baya's Two Women with Vase and Yellow Background (1997) is one of the later works in the show Photo: Mansour Dib; courtesy of Ramzi and Saeda Dalloul Art Foundation

“When I paint, I am happy and I am in another world.” Those were the words of the Algerian Modernist Baya Mahieddine (1931-98), known simply as Baya, who is being paid tribute in a retrospective at the Sharjah Art Museum in the United Arab Emirates. Baya is the latest prominent Arab artist to have their career highlighted in the museum’s annual Lasting Impressions series and it is the first museum exhibition of her work in the Middle East outside of her home country. The show features more than 70 works that burst with life and joy, expressed by a bold sense of colour and contour. “What is special about this exhibition is that it spans Baya’s practice from the 1940s to the 1990s, and therefore includes examples from various phases of her career, and also of the various subject matters she tackled,” explains the co-curator Suheyla Takesh.

Baya’s painterly style is expressive, depicting female characters that sing and dance in ornamented dresses, serenaded by musical instruments, flowers, fish and birds in leafy scenes. “This is a woman painting women, so the representation you get is more personal and is not skewed by a male or a colonial lens,” says Takesh. 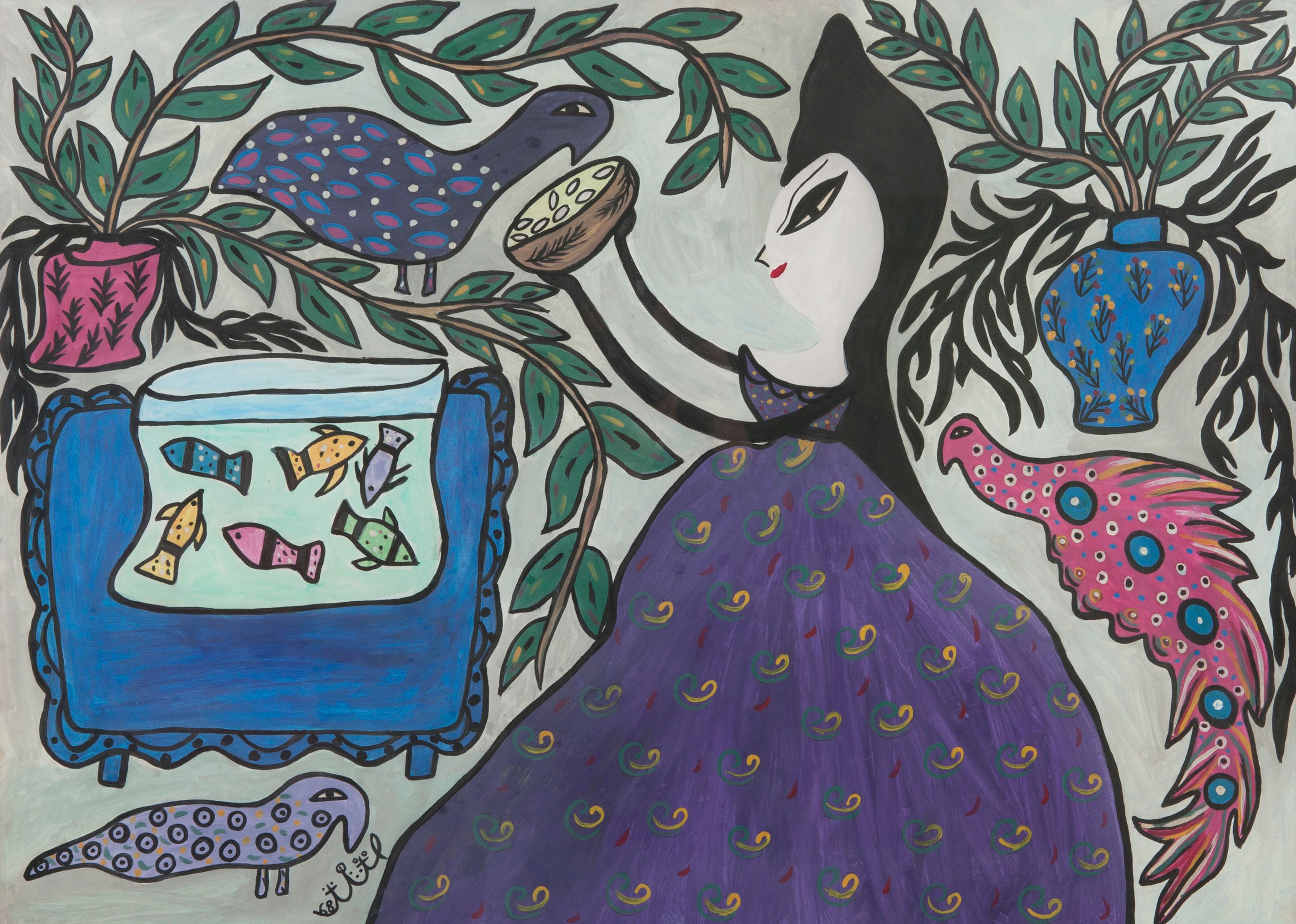 Not only has Baya’s body of work contributed to the field of Modernism in North Africa, but she was praised by European pioneers from an early age. Self-taught, Baya created a world of her own inspired by her childhood memories and surroundings, as well as her rich Algerian and indigenous Amazigh origins.

The French surrealist poet André Breton described her as a “queen” and she even befriended Picasso during her ceramics residency in Vallauris, in the south of France. A rare work in the show is a painted ceramic figurine of a woman, on loan from Lebanon’s Dalloul Art Foundation, which was probably created during Baya’s French residency. 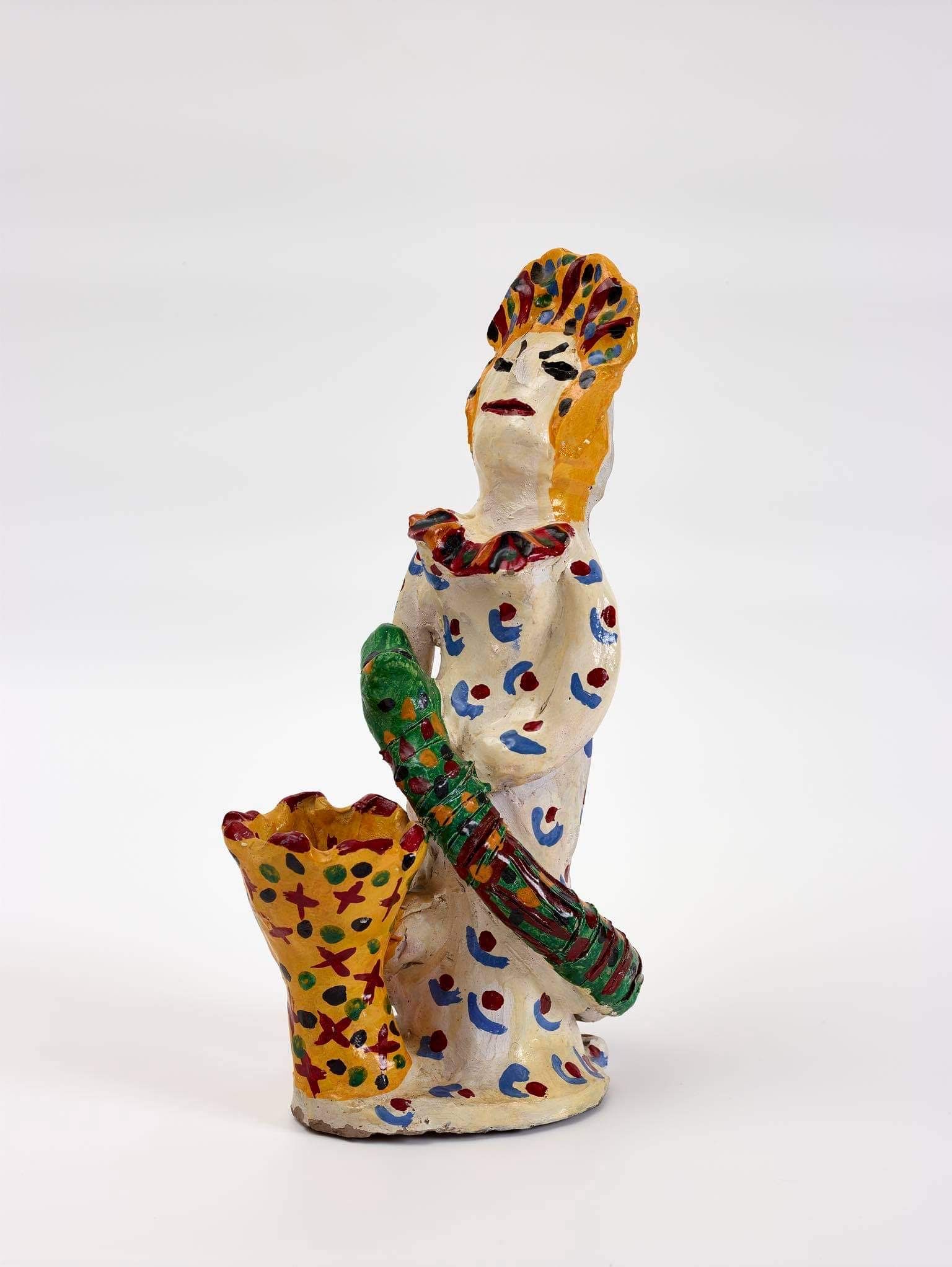 Baya's Untitled ceramic work (around 1948-53) was probably met on a residency in France, where the artist met Picasso Collection of Ramzi and Saeda Dalloul Art Foundation, Lebanon

“What surprised me most about her practice was her confidence in what she was doing and how she did it. Despite all the years and what she went through, she did not let go of her deep rooted sense of identity and self,” the co-curator Alya Al Mulla tells The Art Newspaper. Needless to say, Baya led an extraordinary life.

Born near Algiers, she was orphaned at the age of five and was later adopted by the painter and art collector Marguerite Caminat Benhoura, encouraging her artistic inclination. It was in 1945 that the French art dealer Aimé Maeght came across Baya’s talent and organised her first exhibition at Galerie Maeght, Paris, in 1947, when she was only sixteen. 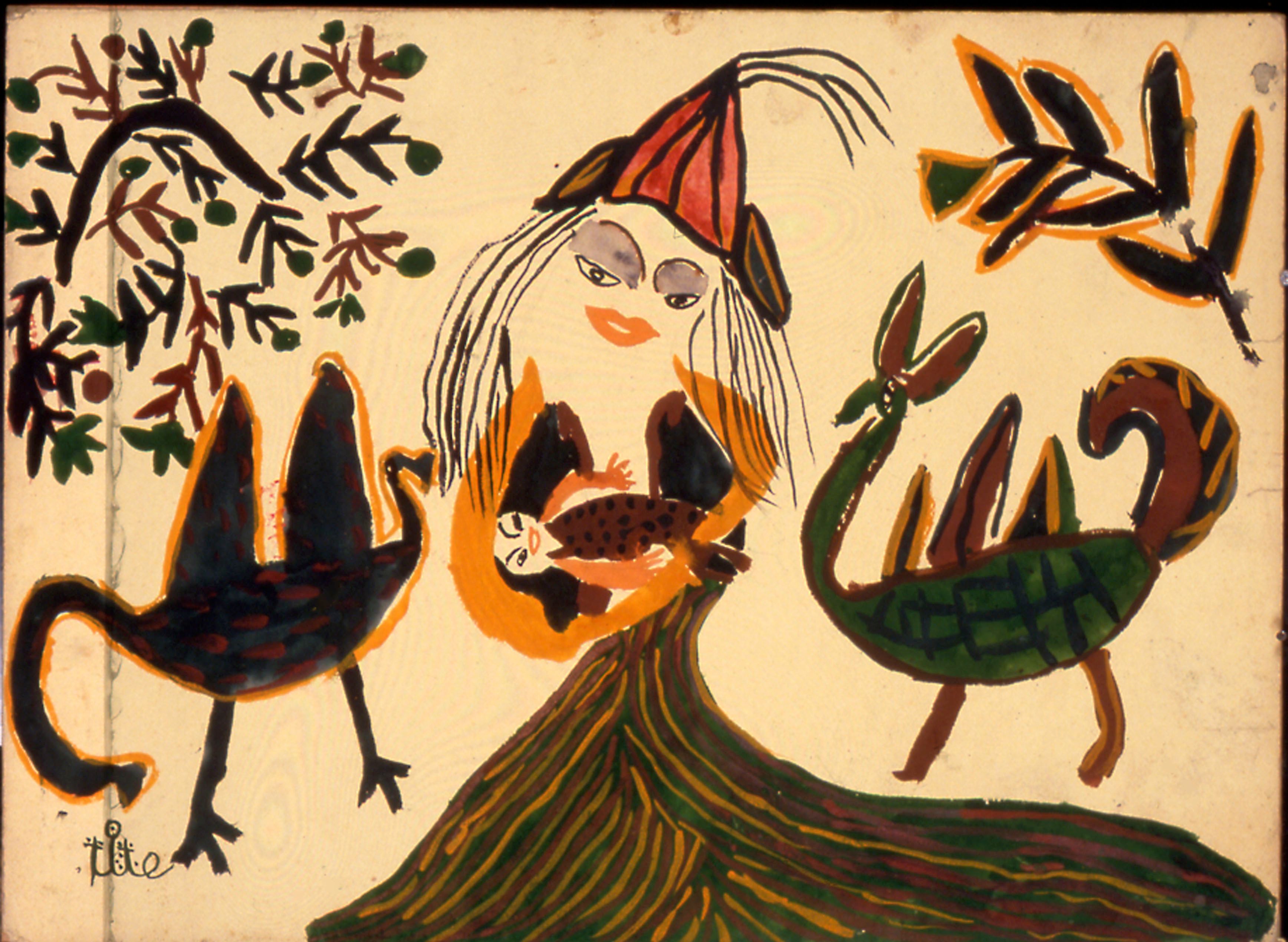 For this Sharjah show, Galerie Maeght are lending some of the same paintings that were displayed in Baya's very first show, including Village and Hill and Woman and Fantastical Character (both 1947). Baya’s family are also lending two works.

According to the exhibition’s curators, Baya remained in France until 1953. One of the misconceptions they aim to break down is that she stopped painting after marrying a musician and raising a family. “We do have works on display from that period,” Al Mulla says. “Although Baya may not have been painting as frequently as she had wanted to, it never completely stopped.”

• Lasting Impressions: Baya Mahieddine is on view at Sharjah Art Museum until 31 July 2021