Museum probably paid at least $3m for the widely exhibited sculpture of a horned devil, but the misattributed work may have been made by a Polynesian artist for the European market Head with Horns in the J Paul Getty Museum, Los Angeles, was almost certainly made in the Pacific—but not by Gauguin © Thomas R Machnitzki

A carving of a horned devil bought as a Gauguin by the J. Paul Getty Museum in Los Angeles is not genuine. Head with Horns, which fetched a record price for a Gauguin sculpture, has just been downgraded and relegated to the storeroom.

A Getty spokeswoman tells The Art Newspaper: “In December 2019 the museum changed the attribution of the sculpture Head with Horns to ‘unknown’. This decision was based on scholarly research over recent years by Getty professionals and other experts in the field, including significant new evidence that was not available at the time of its acquisition.”

In 2002, when the piece was acquired, the Getty’s then director, Deborah Gribbon, said: “Sculpture by Gauguin is exceedingly rare, and this intriguing work stands out as a superb example.” The carved head with human facial features and devil-like horns, mounted on a hefty base, had been dated to 1895-97, when the artist was living in Tahiti. Although Gauguin is renowned for his paintings, he also carved wooden sculptures during his Polynesian stay, although few are as large and ambitious as the Getty example.

Head with Horns has recently been exhibited as a major Gauguin work in some of the world’s leading museums. It was included in Gauguin: Maker of Myth at Tate Modern in London and the National Gallery of Art in Washington, DC in 2010-11. In 2014 it was presented at New York’s Museum of Modern Art, described as “a bestial self-portrait”. In 2015 it was shown in Milan’s newly opened Museo delle Culture. When not on loan, it was in the Getty’s permanent display, as well as in its exhibition The Sculptural Line in 2017. 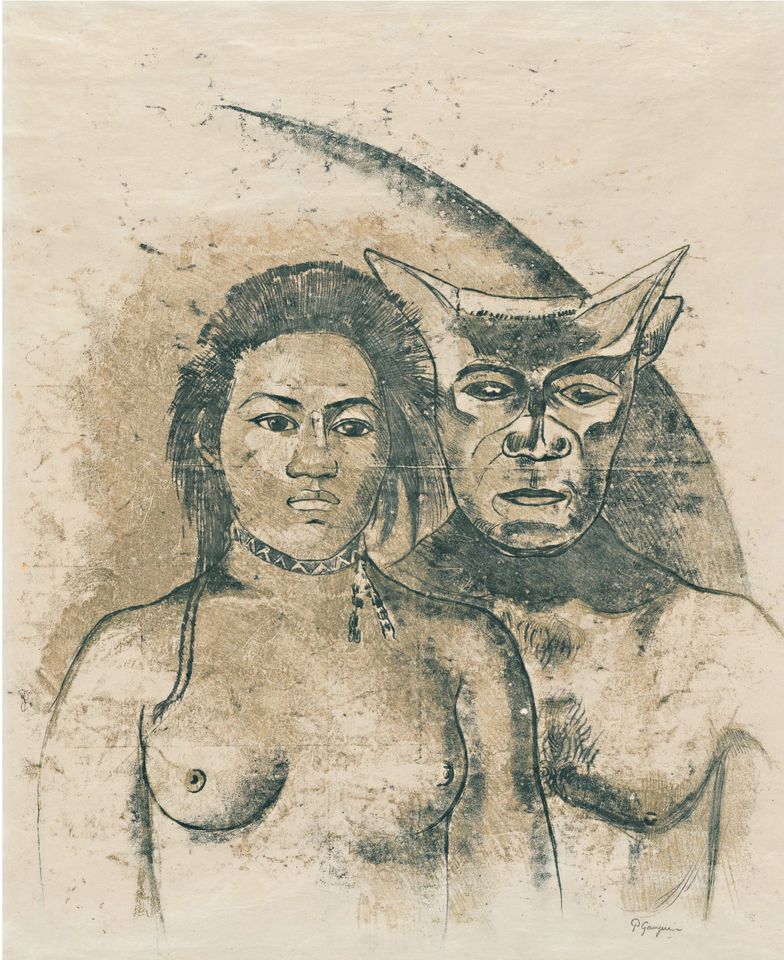 Gauguin’s drawing Tahitian Woman with Evil Spirit (around 1900) includes an image based on the Getty’s sculpture Museum of Modern Art, New York/Scala, Florence

The key evidence for Head with Horns being an authentic Gauguin was that the artist pasted two photographs of the sculpture in his notebook Noa Noa (from the late 1890s, now in the Musée du Louvre, Paris) and included the image in several of his drawings and prints (1898-1900). Art historians therefore long assumed that he had carved Head with Horns in Tahiti, but until the 1990s the actual sculpture remained unknown and it was thought that it was lost and probably destroyed.

Head with Horns first emerged in an exhibition at the Fondation Maeght in Saint-Paul-de-Vence in 1997, on loan from an unnamed American private collection. Five years later, while on show at New York’s Metropolitan Museum of Art, it was bought by the Getty. The Getty does not disclose prices for acquisitions bought privately, but informed outsiders believe that it may well have cost around $3m-$5m. The museum now confirms that it came from the Wildenstein gallery in New York.

Soon after its acquisition, some outsiders began to privately question its authenticity. The sculpture’s most persistent critic has been Fabrice Fourmanoir, an experienced collector of 19th-century Tahitian photography, with a special interest in Gauguin. (I also wrote the only published detailed critique of Head with Horns, in the November 2009 issue of Apollo.) 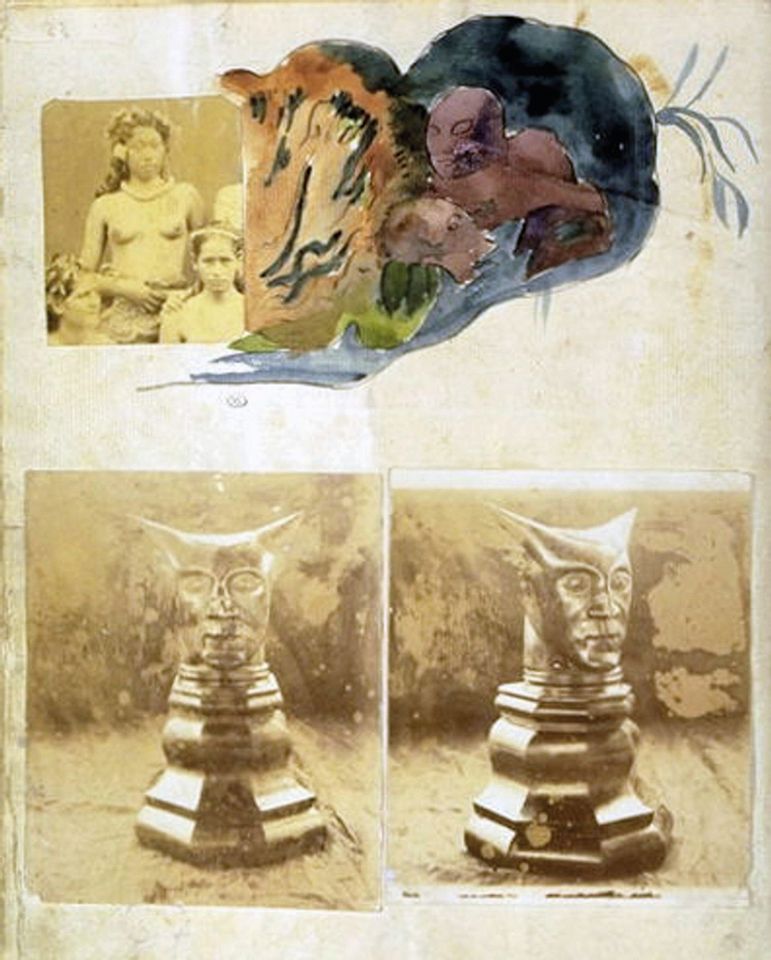 Photographs of the sculpture as they appeared in the artist’s notebook Noa Noa (late 1890s), which was originally the main evidence that it was made by Gauguin ART Collection/Alamy Stock Photo

Anne-Lise Desmas, the Getty’s head of sculpture and decorative arts, is now writing the catalogue of the museum’s French works. Joining the Getty in 2008, she looked at Head with Horns with fresh eyes, becoming increasingly doubtful about the attribution. She points out that “no other Gauguin sculpture has such a pedestal” and unusually for an important Gauguin sculpture, it is unsigned.

Another significant piece of evidence against the attribution, tracked down by Fourmanoir, is a Jules Agostini photographic album acquired in 2015 by the Musée du Quai Branly in Paris. It includes a photograph of the sculpture, captioned Idole Marquisienne—so Agostini presumably believed that it was made by an indigenous carver from the Marquesas, part of French Polynesia.

A close examination of the album suggests that the photograph of Head with Horns was taken between November and December 1894, a time when Gauguin was in Paris (before his return to Tahiti in September 1895, after which he had been thought to have carved the work). Adjacent to Head with Horns in Agostini’s album is a portrait of George Lagarde, a collector of ethnographic material‚ so he could have been the owner of the photographed sculpture.

During its research, the Getty apparently asked Wildenstein about the provenance of Head with Horns. All that the gallery disclosed was that it been bought from an unnamed Swiss private collector in 1993. Where it has been for the hundred years before that is still a mystery.

Wildenstein’s involvement is complicated, since, as well as selling the sculpture in 2002, it was also producing the Gauguin catalogue raisonné (the full paintings volume was already published, but the sculpture volume was due to be prepared). The gallery therefore gave the Getty its scholarly blessing for Head with Horns while having a massive financial interest in the sale.

Wildenstein did not respond to queries from The Art Newspaper. While the Getty must be considering whether it could seek recompense, too much time may have elapsed since it made the purchase.

“Although not a masterpiece, Head with Horns is an highly intriguing object,” Desmas says. Polynesian specialists agree that it is not a traditional sculpture, both for stylistic reasons and its iconography (the “devil”, as such, does not exist in the South Seas). However, it could possibly have been made by an indigenous craftsman for the European market.

Another possibility is that it was made by a European in the Pacific area. Fourmanoir believes that it was carved “by a European sailor on a whaling ship which stopped at Tahiti”, where the sculpture was sold. A close examination of the sandalwood of the head and lacewood of the base, and where these woods could have been obtained, may eventually help solve the puzzle, with further research now underway at the Getty.

Head with Horns was taken off display by the Getty last year, and is now expected to remain in storage. It was noticeably absent from the recent Gauguin Portraits exhibition (opened at Ottawa’s National Gallery of Canada last May, and closed at London’s National Gallery on 26 January), which included sculptures. Desmas and the French Gauguin specialist Anne Pingeot are writing articles on Head with Horns for the Getty Research Journal in February 2021 and the Getty’s sculpture catalogue is due to be published in 2022.