Beer and bread rolls for a vandalised sculpture in Münster

City residents aim to raise €1.2 million for Nicole Eisenman’s Sketch for a Fountain 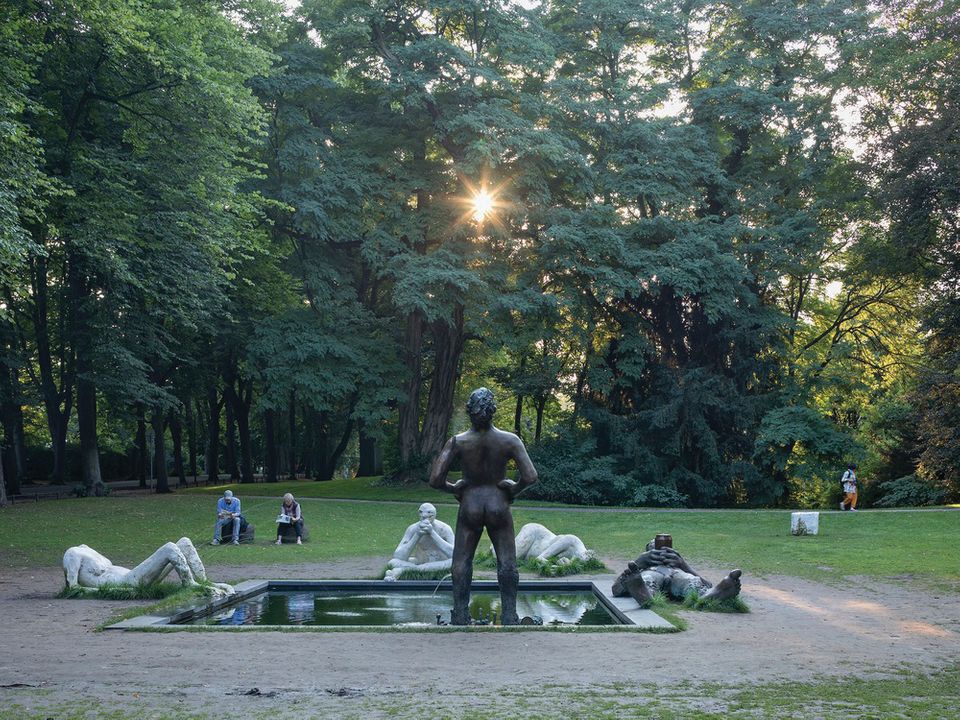 Beer, bread rolls and traditional Westphalian cuisine are some of the ways in which citizens of Münster are raising money to buy an outdoor sculpture by Nicole Eisenman that became a crime scene during the Sculpture Projects Münster exhibition last year.

A group of Münster residents, led by the art dealer Maria Galen and the sculptor Sandra Silbernagel, are seeking to raise €1.2 million for Eisenman’s Sketch for a Fountain, with half coming from local residents. An ensemble of five nude figures of ambiguous gender reclining with drink cans around a shallow basin, the work was on display in a central park during the once-in-a-decade Sculpture Projects Münster, which ended on 1 October and counted more than 650,000 visitors.

A traditional local brewery, Pinkus Müller, has developed a special “Fountain beer,” with a label designed by Eisenman. For each crate sold, a euro goes to the fountain fund and the company will match it.

“We wanted to do something that raises awareness and gets people talking,” says Fridl Langfeld, the chief brewer at Pinkus. “I live 100 metres away from the fountain and walk past the spot many times a week.”

Sketch for a Fountain was the victim of several vandalism attacks during the exhibition; one of the plaster figures was decapitated, and on the eve of the German elections in September, the work was sprayed with swastikas and sex organs. That act was condemned by the organisers of Sculpture Projects as “a fascist form of violence” and “an attack against the values of the work.” The election marked the first time German voters installed a far-right populist party in parliament since World War II, with the anti-immigration Alternative for Germany (AfD) becoming the third-largest party in the lower house of parliament.

Silbernagel says that raising the funds will make an important point about Münster, whose residents gave the AfD the lowest vote count in Germany. “The work is a very political statement and we want to make a stand for tolerance and respect,” she says. “We are trying to win over local businesses as ambassadors.”

In addition to the fountain beer, a local bakery, Cibaria, is selling a “Fountain bread roll,” and two restaurants, Gasthaus Leve and Fischbrathalle Münster, are planning “fountain dishes.” The Cinema Münster is screening an advertisement for the campaign without charge for a year, and a city printer is publishing free flyers.

The version of Sketch for a Fountain produced for Sculpture Projects was never intended for permanent display and it has already been dismantled. Only two figures were modelled in bronze and three were in plaster, and therefore not capable of withstanding freezing temperatures. Even over the summer, the work grew moss and showed wear and tear from the elements.

But it captured hearts in Münster, becoming the most popular Sculpture Projects work with the public, according to surveys. Eisenman, who is based in New York, is exploring ways to create a permanent outdoor version and her gallery, Anton Kern, has agreed to give Münster a special price.

“We will make all five figures in bronze,” she says. “There will be some nod to the status of the figures as formerly in plaster by putting a patina on the surface to separate them. When they were graffittied, the removal of spray paint left a light blue patina from the traces of leftover paint. I think it actually looks really good.”

Anton Kern has offered three versions of Sketch for a Fountain: two have been sold, to the city of Boston and the Nasher Museum in Dallas, and Münster’s would be the third. “They are all slightly different,” Eisenman says.

The fund-raising campaign is supported by Skulptur Projekte Münster and the mayor. The organisers, who have formed an association called Dein Brunnen für Münster (Your Fountain for Münster), will seek to raise the remaining €600,000 from private foundations and public bodies.