Competition for works by Giacometti, Ernst, Moore, and Arp drove a $173.8m Impressionist and Modern sale

The Impressionist and Modern evening sale at Sotheby’s on 16 May got off to an unsettled start with the announcement, by auctioneer and worldwide co-head of the department Helena Newman, that the star lot—an early Egon Schiele painting from 1909 with an asking price of $30m to $40m—was one of two lots to be withdrawn from the sale, evidently in the final hour. Without the firepower of that heavy-hitter, the house could not compete with Christie’s $289m take the night before, but pulled off $173.8m with fees on 37 sold lots, with strong prices for Kazimir Malevich, Max Ernst, Jean Arp, and Diego Giacometti.

Although the tally slightly trailed the results seen at Sotheby's London in March, Simon Shaw, the house’s worldwide co-head of Impressionist and Modern art, was “delighted” by the competition he saw—nearly four bidders on average per lot. "It was a confident room, and an international one”, he says.

Modern sculptures, five of them hailing from the collection of David and Laura Finn, saw brisk bidding. Impressionist works, much less—a wan-looking Monet waterlilies painting with a nonetheless attractively short ownership history, Le bassin aux nymphéas (circa 1917-20), barely squeaked past its $14m low estimate—and there was a dearth of Post-Impressionist pieces. Rather than the sale's two late Picassos, one of which bought in, the paintings that generated heat included a rare 1917 canvas by Giorgio de Chirico, Il sogno di Tobia (est $5m-$7m), which fetched $8m ($9.2m with fees), and a small 1953 Morandi still-life, sold for $950,000 ($1.15m with fees).

The action certainly provided a contrast to the energy during the Christie’s sale. More than once, a Sotheby’s associate leapt in with a bid just as the hammer was coming down—as with the Max Ernst sculpture from the collection of the artist Robert Motherwell. The chess-themed bronze Le roi jouant avec la reine (conceived 1944, cast in the 1950s), was the subject of shouted bids from at least 10 corners, driving the price well beyond the estimate of $4m to $6m over the course of several minutes. Chief operating officer Adam Chinn, on the telephone, swept in to claim it as Newman’s hammer came down for $14m, or $16m with fees. 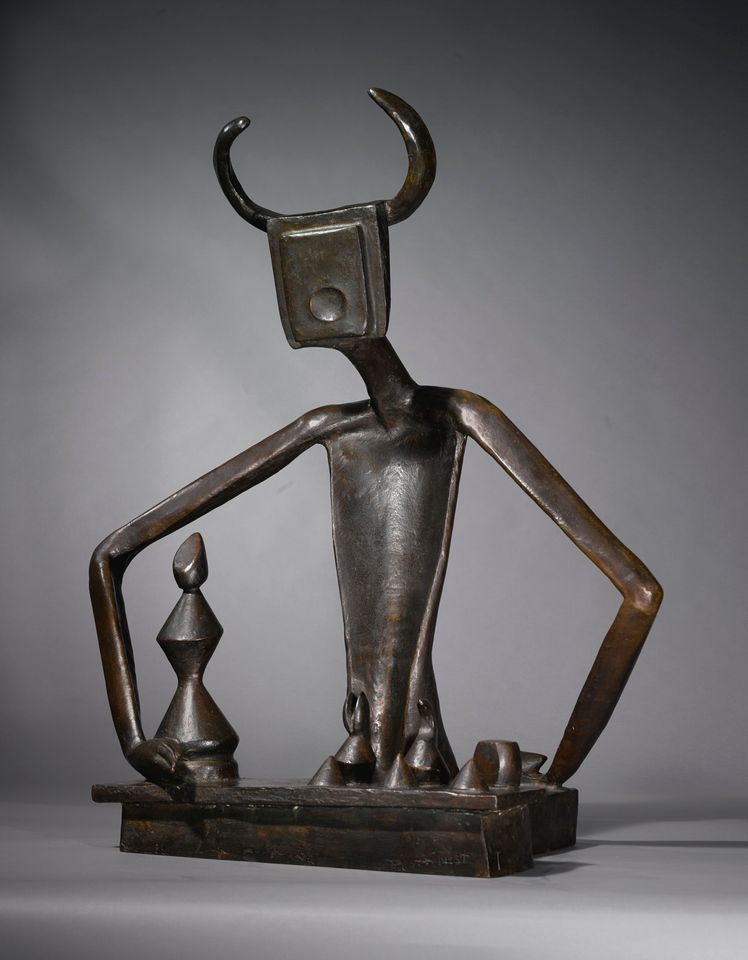 Max Ernst's chess-themed bronze sculpture Le roi jouant avec la reine (conceived 1944, cast in the 1950s), from the collection of the artist Robert Motherwell, was the subject of shouted bids from at least 10 corners, driving the price well beyond the estimate of $4m to $6m to sell for $14m, or $16m with fees

Another contested lot was a piece of furniture—Diego Giacometti’s custom, corner-wrapping bookshelf for the Île de Saint Louis home of the publisher Marc Barbezat (1966-69; est $2m-$3m)—unusual for an evening sale category weighted toward pictures. According to Amy Cappellazzo, the chair of Sotheby’s fine art division, the sculptor’s “magnum opus”, with its rich patina and whimsical accents on drawer pulls, attracted attention during the preview and found more than one interested buyer with the space to house it; it sold for $5.4m hammer ($6.3m with fees) to her bidder on the telephone—a record for the artist.

The top honors, however, went to Kazimir Malevich’s Suprematist Composition with Plane in Projection (1915; est $12m to $18m) after what Shaw described as “a slugfest” between bidders on three continents that saw the price rise to an applause-inducing $18.6m ($21.2m with fees). With Sotheby's having set the artist’s four top prices at auction, “Malevich is now one of our ‘house artists’”, Shaw says.

In a post-sale press conference, Newman said that the result for the Malevich is “symptomatic of today’s market” when a picture “ticks all the boxes: that’s when you see the strong, competitive bidding”. As at Christie’s the previous night, money was there for masterworks and Modern fare, but other subsets struggled, with about a quarter of the lots bought in.