The director seems to once again have borrowed from the work of visual artists, which has previously led to lawsuits against Kendrick Lamar and Ariana Grande 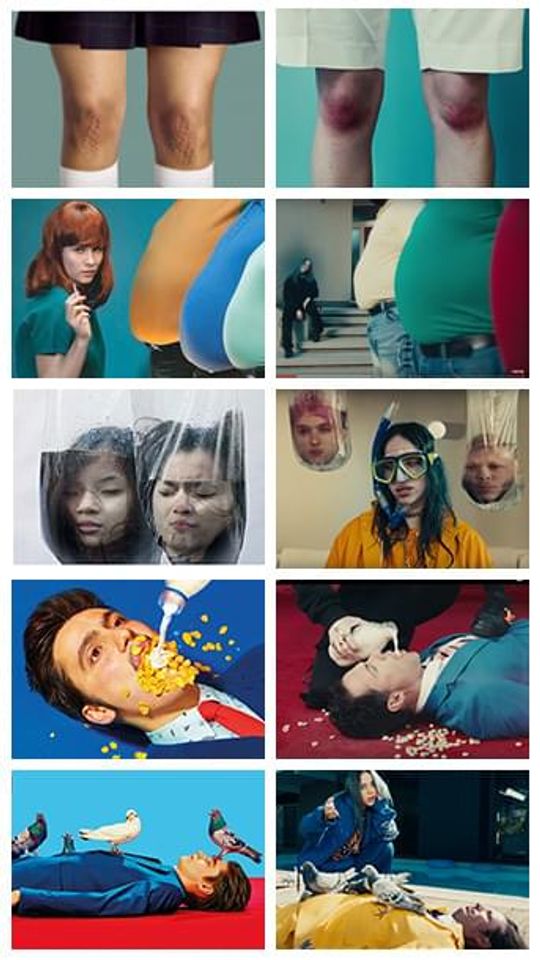 The Reddit user u/whoatemyteeth posted this image on the site, showing the similarities between the two sets of imagery: Cattelan and Ferrari's works are on the left and stills from Ellish's video are on the right Via Reddit

The director behind music videos for stars including Taylor Swift and Travis Scott is again being accused of copying the work of contemporary visual artists. Dave Meyers, whose previous videos have caused singers Ariana Grande and Kendrick Lemar to be sued for copyright infringement, is now being criticised for appropriating images by the artists Maurizio Cattelan and Pierpaolo Ferrari in his video for Billie Eilish’s pop hit Bad Guy.

The video for the song was released together with the musician’s newest album When We Fall Asleep, Where Do We Go? on 29 March. Since then, commentators on a Reddit thread have highlighted similarities between scenes in the video and a photographic series that Cattelan and Ferrari created for Toiletpaper Magazine, the satirical, bi-annual, picture-based publication the pair founded in 2010. The striking resemblances include images of severed heads in water-filled plastic bags and a man lying down with milk and cereal being poured into his mouth.

There does not appear to be an official collaboration between Meyers and the artistic duo. One Reddit user wrote that he had alerted Toiletpaper Magazine through its Instagram account and added a screen shot of the response: “Actually we didn’t know about that video… and nobody from that project tried to contact us. Surely we will check how and why it happened.” Neither the artists or Meyers were immediately available for comment.

This is not the first instance of the Grammy-winning director being accused of appropriation in his works. The Las Vegas-based artist Vladimir Kush filed a complaint in January 2018 against Grande’s music video God is a Woman, claiming that the scene where the musician is shown dancing inside a candle flame against a background of clouds is identical to his paintings The Candle and The Candle 2, both made around two decades ago. The defendants in that case, including Grande, her music label Universal Music Group, Meyers and his production company Freenjoy, have until 14 June to respond to the complaint. And Meyers’s video for All the Stars by Kendrick Lamar and SZA was also the centre of a legal dispute when the artist Lina Iris Viktor accused the rapper of using imagery taken from her Constellations series of works without her consent. The two parties reached a settlement in December 2018.