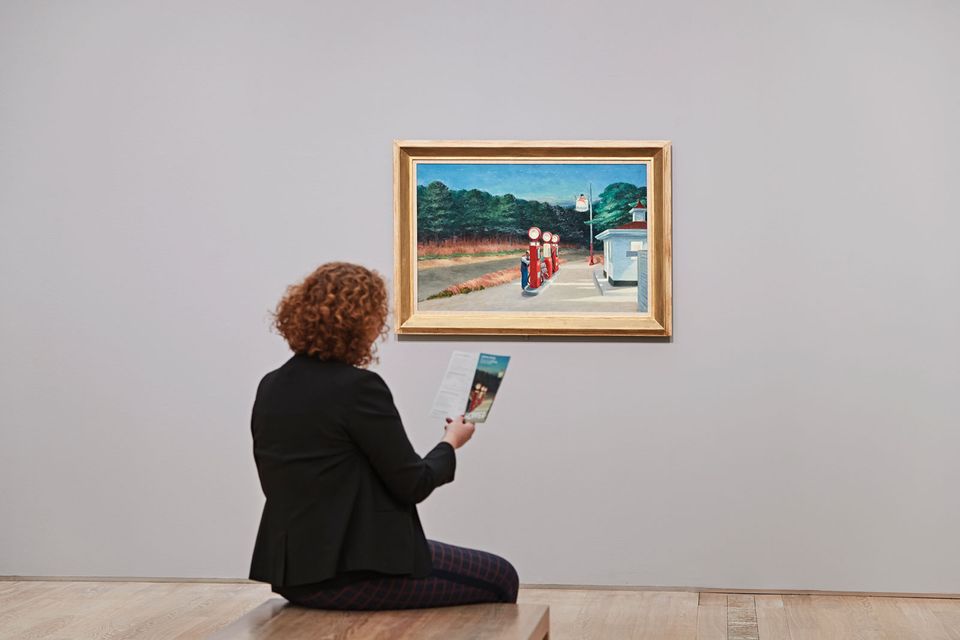 A visitor at the Edward Hopper exhibition at the Fondation Beyeler, before the lockdown © Photo: Mark Niedermann

The Fondation Beyeler in Riehen, just outside Basel, says that its “recent slumber” is over as it reopens its doors for the first time today since closing 14 March in the wake of the coronavirus outbreak. The move follows the Swiss governmental Federal Council’s decision to ease coronavirus measures, with both large and small-scale museums in Switzerland permitted to re-open from 11 May.

Unlike other major museums worldwide that cannot extend their shows due to binding loan arrangements, the institution says its Edward Hopper exhibition “is being extended in its entirety until July 26, thanks to the generous consent of our cooperation partners, the Whitney Museum of American Art in New York and the other American lenders to the show”. All tickets must be bought online and “distance markings” throughout the gallery should ensure “optimal visitor flow”, according to a statement from the museum.

The Kunstmuseum in Bern will open its doors from 12 May; its exhibition of works by El Anatsui, co-organised by the late curator Okwui Enwezor, was scheduled to close 21 June but has since been extended to the autumn.

Another Bern-based institution, the Bernisches Historisches Museum, is also due to reopen 12 May. Its curators are building a collection of “corona mementoes”, inviting people to send photographs and videos of their experience during lockdown. A statement on the museum website asks: “What objects and stories should the museum display in 2050 so that people will understand what life was like for the citizens of Bern in 2020 during the coronavirus crisis?”

The Kunsthaus Zürich is due to reopen 15 May, and its exhibition programme has subsequently been re-scheduled: Ottilia Giacometti: a Portrait, dedicated to the Swiss sculptor Alberto Giacometti’s sister, is extended until 19 July, while Smoke and Mirrors: the Roaring Twenties now begins on 3 July and ends on 11 October.

Marc-Olivier Wahler, the director of the Musée d’art et d’histoire in Geneva, says the museum will open 21 May. "We are confident that everything is going to be smooth. We’ve had [weekly] task force meetings with other museum directors, security managers, etc. We set up some strict rules, but not stricter than the ones that apply to grocery stores, for example. We’ll offer some specific guide tours, available on your smartphone, that will dispatch visitors evenly [amongst] the museum exhibition spaces."

Meanwhile, in South Korea, the National Museum of Modern and Contemporary Art has partly reopened its four museums in Seoul, Gwacheon, Deoksugung, and Cheongju. “Entry is limited to 200-800 guests per day, depending on each museum’s size, with visits expected to last around two hours,” according to a statement. Under the strict new regime, visitors are asked to complete a questionnaire during the online reservation process regarding “possible fevers, respiratory symptoms, and recent travels abroad”.

The Hong Kong Museum of Art partially re-opened last week though officials at the institution are monitoring the situation daily as the institution closed previously on 29 January in the wake of the coronavirus crisis. The state-run museum reopened 11 March but was forced to close after a second outbreak. Exhibitions such as A Sense of Place: from Turner to Hockney, which includes 76 works drawn from the Tate in London, have been extended (dates to be announced).

POSTSCRIPT: Sam Keller, the director of the Fondation Beyeler, says: "Visitors are curious, but they've been to pharmacies, for instance, and on public transport and seem to be more comfortable in a museum. We saw around 2,500 visitors on a normal Monday for our Edward Hopper show; today there'll be around 300. There are extra costs, such as increased security staff, and it might be difficult long term—we've lost a substantial amount so far this year—but this is a collective experience, and we'll find out what works and what doesn't. Is this the end of the museum? Not at all. There may be fewer international visitors but museums are very resilient (institutions may need to organise more collection-based shows, for example). Another positive aspect is that museums and collectors who have loaned works have been very supportive to [help] extend shows."