Board will revisit vote that would allow demolition of site-specific work at National Geographic Society’s home in Washington, DC 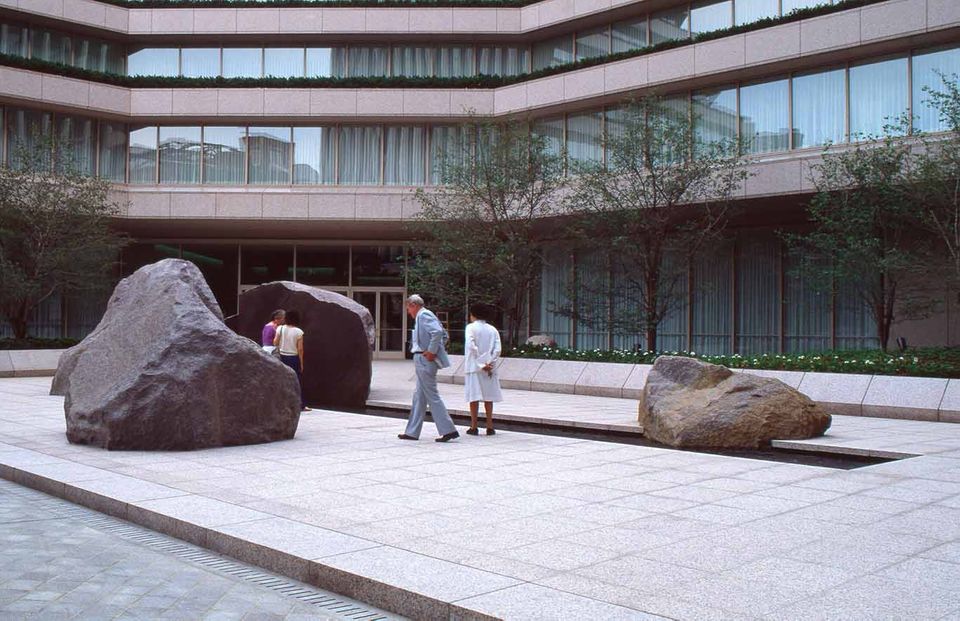 Heeding letters of protest, a panel overseeing historic preservation decisions in Washington, DC, today decided to revisit a decision it made last August that would open the way for demolishing a sculptural installation at the National Geographic Society (NGS)’s headquarters.

In a campaign organised by the nonprofit Cultural Landscape Foundation, the Historical Preservation Review Board of the District Columbia has received a series of letters decrying the society’s plan to remove Marabar, the 1984 work by the New York-based artist Elyn Zimmerman, and arguing for its historic importance. Consisting of a reflecting pool and colossal granite boulders on an outdoor plaza, the installation was commissioned to complement a 1981 headquarters building on the NGS campus by the architect David Childs.

NGS argues that the work must be displaced to make way for a new entrance pavilion, which is part of a broader renovation to make its campus more welcoming to visitors. The Historic Preservation Review Board approved the design concept for that plan last August.

In a virtual meeting of the board this morning, however, one member, Outerbridge Horsey, pointed out that NGS never highlighted its intention to remove Zimmerman’s work when it presented its renovation plan to the agency.

“I'm sorry that this didn't come up in our original review of this a few months ago because we might have thought differently or thought more holistically about the project had it been brought up,” Horsey said. “I think it's a very important issue.”

He added, “We just weren't aware of it and the applicant did not bring it to our attention, which I think was unfortunate.”

The board did not take a vote on the matter in today's meeting. But its chair, Marnique Heath, noting that a majority of board members at the session expressed support for reassessing last August’s vote, said that it would revisit its decision and seek further information from NGS and the letter writers opposed to the work's removal.

“The board will definitely want to hear that the applicant has strongly considered retaining the sculpture in some form, possibly relocating it somewhere on the site as a part of a new concept or if not, why that is not at all possible,” she said.

NGS said it had no comment on the review board’s decision. But last week a lawyer for the society submitted a letter to the board arguing that Marabar should not be protected because it does not qualify as a historic landmark or contribute to the historic district in which it partly lies. Nor is it “a feature of the Washington built landscape that draws attention”, it said. The Cultural Landscape Foundation countered that “NGS is not the arbiter of what is and is not considered historic in the District of Columbia”. In letters to the board, prominent figures in the art world and architectural circles meanwhile assert that the pool and boulders constitute one of the most impressive pieces of site-specific landscape art of the 20th century.

The Cultural Landscape Foundation applauded the review board’s decision today. “Marabar is the jewel in the setting,” said Charles A. Birnbaum, the foundation’s president and chief executive. “We are pleased with today’s decision and urge National Geographic to work with Ms. Zimmerman, architects Hickok & Cole and landscape architects OLIN to develop a design that meets the society’s programmatic needs and retains Marabar.”