Not to be sneezed at: £350,000 Bristol house taken off market after Banksy paints mural worth millions on it 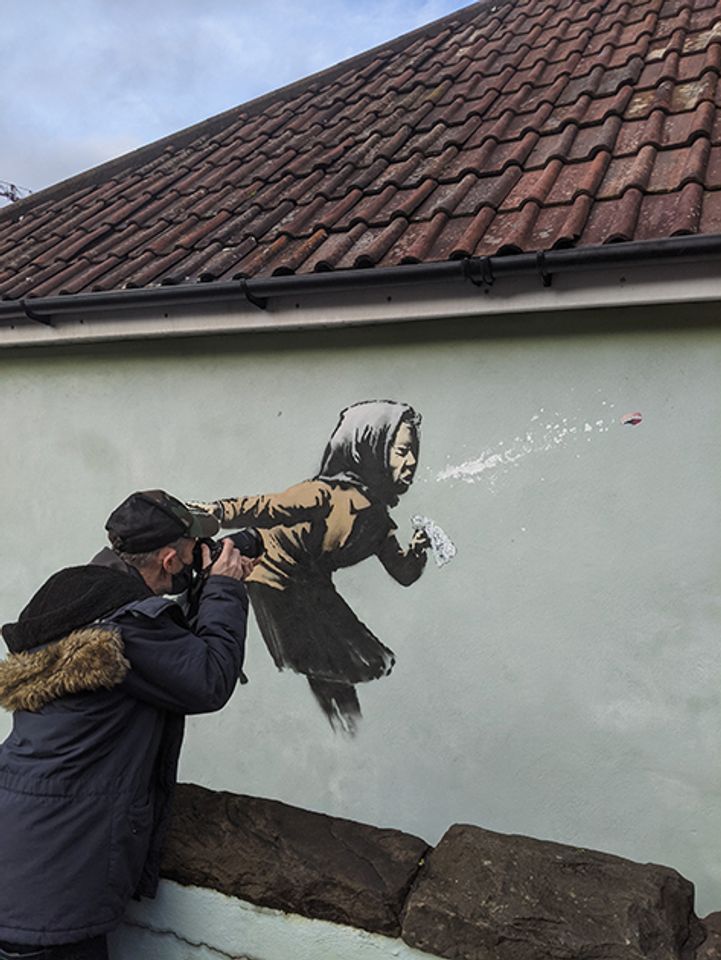 Part of the crew? Photographers were on hand to capture the new work by Banksy—before it had been claimed as his on Instagram © Mark Lundin / @marklundin

What do you do when your two-bed semi detached house that you are selling for £345,000 becomes the site of a world-famous work of art overnight?

That is the conundrum now facing the Makin family whose Bristol home was adorned with a Banksy mural in the early hours of Thursday morning. Alex Makin, whose mother owns the house, tells The Art Newspaper the family is taking the property off the market while it considers its next steps.

“The main thing is to try and protect the work because it’s such an iconic piece—a) because it’s Banksy and b) because of the year, it’s Covid-related,” Makin says of the work, which shows an older woman sneezing with such force her dentures have been catapulted out of her mouth. Within hours of the work being painted, Makin had the mural covered with a Perspex sheet.

He adds: “We’re not really sure what we’re going to do at the moment. It would be an amazing thing to keep in the family, but we also want to make sure it is properly protected. It’s been a fairly tough year for my mum, so this feels like a bit of light at the end of the tunnel.”

Banksy’s pieces have been known to double the price of a property, while one art market specialist valued this latest piece at £3m-£5m in The Sun newspaper. However, Robert Pain, the client director of Bristol estate agents NEXA, offers a more cautionary valuation. “It’s a conundrum, though a wonderful conundrum to have: everyone wants a Banksy on their wall but does it alter what the bricks and mortar are worth?” he asks. “Ultimately, is it a work of art on brick, potentially worth a million. If so, do you remove it and spend £60,000 rebuilding the wall?”

Whether someone would now offer double the asking price is impossible to tell, Pain says. “At £600,000 it would have to be a cash buyer as banks don’t lend for mortgages based on works of art,” he points out.

The property was only vacated by tenants last week, which Makin believes could have prompted Banksy to target it. “We think he might have sussed out that it was actually empty,” he says.

Mark Lundin, who lives on Vale Street, one of the steepest in the UK, says he spotted a man in a high-vis jacket at the foot of the road around 7am on Thursday. After being alerted by another neighbour that a work by Banksy had appeared on their street, Lundin went to investigate. “There was a little entourage of people that were all huddled around, they weren’t from the local community, there were some professional photographers,” he says.

“I asked one of the guys taking a photograph if it was a Banksy but he was quite dismissive and just shrugged. He disappeared quite quickly afterwards,” Lundin says.

Speculation has also been mounting over the identity of a man posing with an umbrella in one of the photographs Banksy posted on his Instagram account around ten hours after the mural appeared. The man appears lying on the pavement next to an overturned wheelie bin, apparently blown over by the force of the woman's sneeze, which has also turned his umbrella inside out. Likely to be one of Banksy’s team rather than Banksy himself, the staging of the photograph nonetheless adds a further layer to the mural.

As Lundin says: “The work is very much about the context of the place. It’s a quirky hill and you can see the whole of Bristol behind it, so the staging of it is verging on theatrical itself. I didn’t quite clock at the time that maybe what I was witnessing was the creation of the work in some way—the framing of it was actually part of it.”

Whether the work will remain in situ is the burning question.

“It’s a wonderful thing to have on our street and to share with people, but just by virtue of who Banksy is, these things are not treated like normal pieces of street art anymore, they can just disappear overnight,” Lundin says.

Update: Following publication of this article, another member of the Makin family, Nick Makin, told the BBC that the sale of the house would be going ahead, but had been “put on hold for 48 hours”. He added that the family was “looking at getting a covenant put into the deeds of the house” to ensure the mural stays where it is. “Or if it was to be removed, to be removed to Bristol City Council or the museum, so it can be kept in its condition and safe and in the right hands.”