In accepting the award, Andria Zafirakou asked for more support for the “power of the arts” in schools, particularly in poor communities 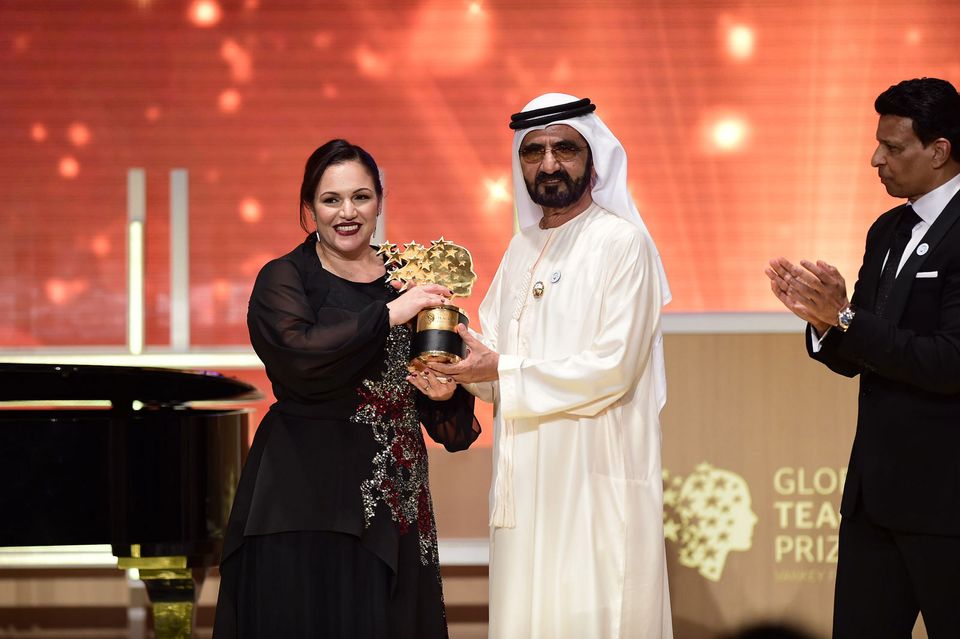 A British art and textiles teacher from a school in one of the most deprived parts of London was yesterday awarded a $1m prize given annually to someone who has made “an outstanding contribution to the profession.”

Andria Zafirakou works at the Alperton Community School in Brent, an area where over a third of children live in poverty, there are high levels of gang violence and the murder rate is the second highest in the country.

Last night, at a glamorous ceremony in Dubai, she was named the winner of the Varkey Foundation Global Teacher Prize 2018, awarded under the patronage of the ruler of the Gulf emirate, Sheikh Mohammed Bin Rashid Al Maktoum.

The event was hosted by the South African comedian and Daily Show host Trevor Noah, included a performance by the Oscar-winning singer Jennifer Hudson, and an appearance by the Formula One world champion Lewis Hamilton who presented Zafirakou with a trophy.

In a pre-recorded video message, the British Prime Minister Theresa May congratulated Zafirakou. “Being a great teacher requires resilience, ingenuity, and a generous heart. These are the qualities that you share with your students everyday. So thank you for all you have done and continue to do,” she said.

May’s appreciative statement, however, comes at a time of increasing pressure on the teaching of arts in schools throughout England and Wales. Because of the government’s focus on math and science, many schools are choosing to reduce or eliminate the teaching of subjects such as music, drama and art.

“Too often we neglect the power of the arts to actually transform lives, particularly in the poorest communities,” Zafirakou said when she accepted the prize.

She was recognised, in particular, for her initiatives in reaching isolated children of many different ethnicities. To tackle the overcrowding some children face at home, for example, Zafirakou and her fellow teachers offer them extra time in the classroom during the week and at weekends so they have a quiet place to work.

She has also helped introduce tailored, extra-curricular activities such as a Somali school choir and girls-only sports that do not offend conservative communities. In her own classes, she helps students confront and cope with the challenging situations they may face at home through the making of art.

“One of Andria’s greatest innovations was to bring local police officers, mental health workers and teachers to the school to discuss pupils, enabling everyone involved in their lives to work together to help them succeed,” the organisers of the prize said in a statement.

“Andria is potentially the most powerful advocate for the arts in schools in Britain. She represents their importance to ordinary people for whom she can speak. She overcomes any accusation of elitism in the arts or in the urban liberal elite,” the artist and former Goldsmith’s College tutor Michael Craig Martin said in an email to The Art Newspaper.