British Museum considers loan of ‘invisible’ objects back to Ethiopia 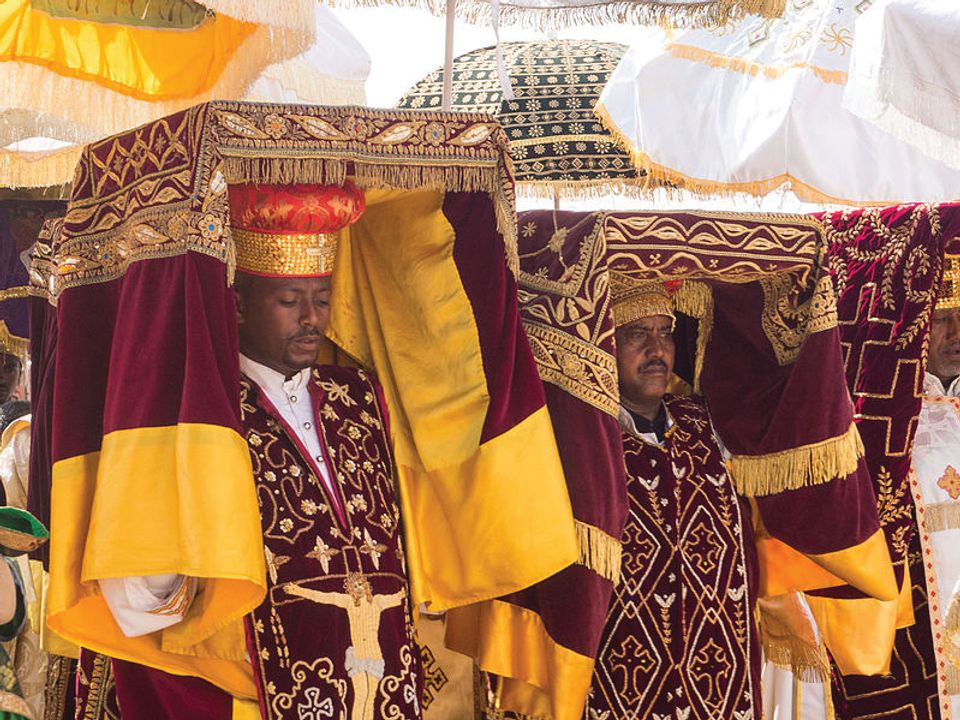 The British Museum is to consider returning a group of “invisible” objects to Ethiopia. These are tabots (Christian plaques), which symbolically represent the Ark of the Covenant—the wooden chest that is said to have held the Ten Commandments. The Ethiopian Orthodox Church believes that tabots should never be viewed by anyone other than its priests.

There are 11 tabots in the British Museum. Although the storage arrangements are confidential, they are believed to be kept in a sealed storeroom in the basement of the Bloomsbury complex. Even Lissant Bolton, the museum’s keeper of Africa, Oceania and the Americas, has never set foot in the room, let alone seen the tabots. The Art Newspaper understands they are individually wrapped in cloth and placed on a shelf covered with purple velvet.

Nine of the museum’s 11 tabots are made from wood, the other two from stone, and they probably all feature a carved cross. The tabots were made to sanctify the individual churches where they were originally kept and usually include the name of the saint after which their church is named. These particular tabots were seized by British troops at the battle of Maqdala in 1868, when Emperor Tewodros committed suicide. Seven were donated to the museum soon afterwards by the secretary of state for India, and another came from the museum’s representative on the punitive expedition, Richard Holmes. One was purchased in 1968, another donated in 1990 and the final one has an unknown provenance.

In March this year an Ethiopian delegation, headed by the culture minister Hirut Kassaw, visited the British Museum and met with its director, Hartwig Fischer. During an amicable discussion, the Ethiopians informally requested the return of the 11 tabots, along with other material seized at Maqdala. A museum spokeswoman confirmed to The Art Newspaper: “Our officials recently met an Ethiopian delegation. The director is now going to report to the trustees, and the suggestion of a long-term loan of the tabots may be discussed.”

The museum is legally unable to deaccession in normal circumstances, but it could offer a long-term loan, which in practice might continue as a fairly permanent arrangement. Although the Ethiopian government may well facilitate the request, the tabots would presumably not go to the National Museum in Addis Ababa but to the Ethiopian Orthodox church, which would decide where they should be held.

If a loan proceeds, it would need to be an unusual arrangement from a monitoring point of view. Normally objects going out on loan are examined by British Museum conservators to record any existing damage, and then periodically examined or re-examined on their return. The museum would also normally need to be happy with the environmental and security conditions at the recipient’s venue. In this case the museum would have to take it on trust that the Ethiopian Orthodox church would take good care of these sacred objects.

But despite this hurdle, a long-term loan approved by the trustees would go some way to restoring their record after the unfortunate events of 1868. David Wilson, a former British Museum director, wrote in a 2002 book that “one of the less glorious episodes in the history of the museum, in today’s terms, was the trustees’ involvement in the punitive expedition to Abyssinia [Ethiopia]”.

Although the trustees may be worried about precedent, each restitution request is different—and this one is almost unique in that the objects should never be viewed (even in photographs—if they exist) by anyone at the museum: not visitors or researchers, or even curators. The tabots are, in effect, an invisible part of the British Museum’s collection.

Last month, the UK culture secretary Jeremy Wright told the Times newspaper that he was ruling out new legislation to allow the British Museum and other national museums to restitute objects permanently. Instead, he supports the idea of loans: “You can gain a lot of goodwill, and we will seek to [do so] by that sort of cultural cooperation.”