British Museum dips its toes into world of underwater archaeology

Hundreds of objects swallowed up by the sea more than a millennium ago are going on show in the British Museum’s first exhibition on underwater archaeology. The London show, which opens this week, explores the rich history of interactions between the Egyptians and the Greeks. It presents 300 artefacts, around 200 of which were found off the coast of Egypt within the past 20 years by a team from the Institut Européen d’Archéologie Sous-Marine (IEASM) under the direction of the French archaeologist Franck Goddio, who is co-organising the show with the museum’s curator Aurélia Masson-Berghoff.

The Egyptian government tasked Goddio with surveying Abukir Bay, on the Nile delta, in search of what was then believed to be three cities reclaimed by the sea: Canopus, Thonis and Heracleion. In 1999, Goddio’s team found Canopus. Two years later, they discovered a stele (tablet) that Goddio says “solved a 2,000-year-old mystery” that not even the ancient Greek historian Herodotus could unravel: Thonis and Heracleion was, in fact, one city and not two.

Goddio estimates that, so far, his team has studied perhaps as much as 10% of Canopus and just 3% to 5% of Thonis-Heracleion. The area comprising the latter seems to extend every year, which “is encouraging or discouraging, depending on how you look at it. I think it’s encouraging”, he says.

Thonis-Heracleion is around 3.5 sq. km. “This would be a big undertaking on land,” Goddio adds, “but under the sea and under the sediment, it’s a task that will take hundreds of years.”

He compares his precise, pinpoint excavations to the use of precision instruments in modern surgery. “Technology such as nuclear magnetic resonance enables us to gather data without having to touch the site itself,” he says.

Excavating the entire area is not part of Goddio’s plan, because the sediment—comprising clay silt from the Nile—acts as a protective layer against salt water, which is both chemically and physically aggressive to artefacts. “The goal is to learn as much as possible from our excavation without being intrusive,” he says. For example, the team was able to map and trace a 175m wall through just three small, spot excavations.

A big part of the IEASM’s time and budget goes towards stabilising, restoring and preserving the objects that are unearthed—a process performed on board the ship and in an onshore laboratory. This can take days or months, depending on the artefact. The treatment of the colossal statue of the Nile god Hapi from Thonis-Heracleion took two-and-a-half years. “It’s our duty to preserve these objects,” Goddio says.

Under the sea: discoveries that are changing our views of ancient Greek and Egyptian interaction 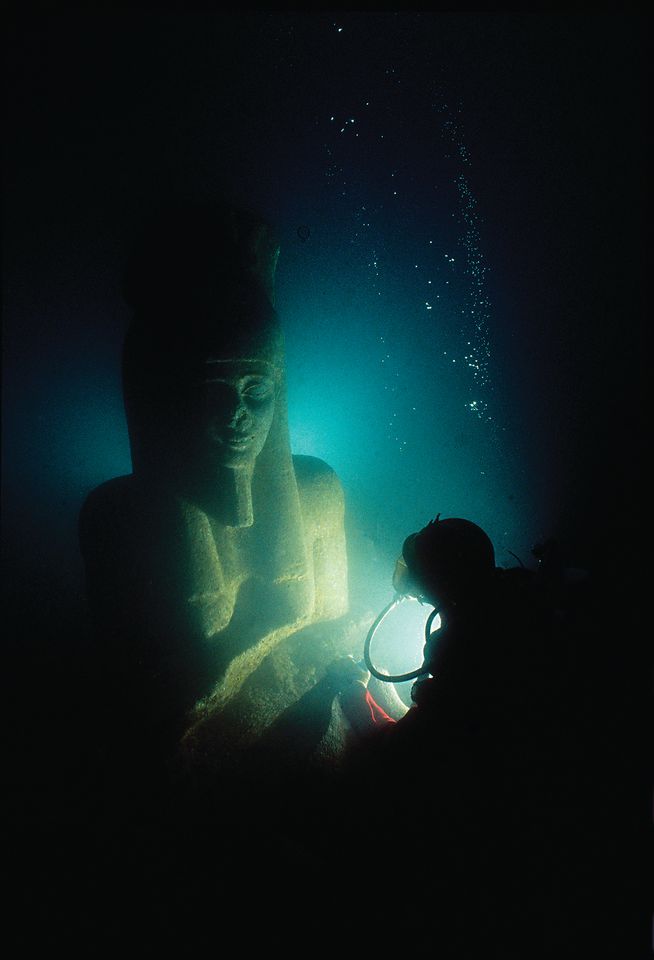 A six-tonne, 5.4m-tall statue of Hapi, the god of the inundation of the Nile. It is one of three colossal sculptures in the show. Dating from the fourth century BC and made of red granite. Christoph Gerigk; © Franck Goddio/Hilti Foundation

What better way to welcome visitors to an exhibition on sunken treasures from Egypt than by displaying a six-tonne, 5.4m-tall statue of Hapi, the god of the inundation of the Nile? It is one of three colossal sculptures in the show. Dating from the fourth century BC and made of red granite, the work was found in front of the Temple of Amun-Gereb in Thonis-Heracleion by Franck Goddio’s team from the Institut Européen d’Archéologie Sous-Marine. Although it is not unusual to find massive statues of kings and queens, this is the biggest sculpture of a deity to be discovered in Egypt so far. 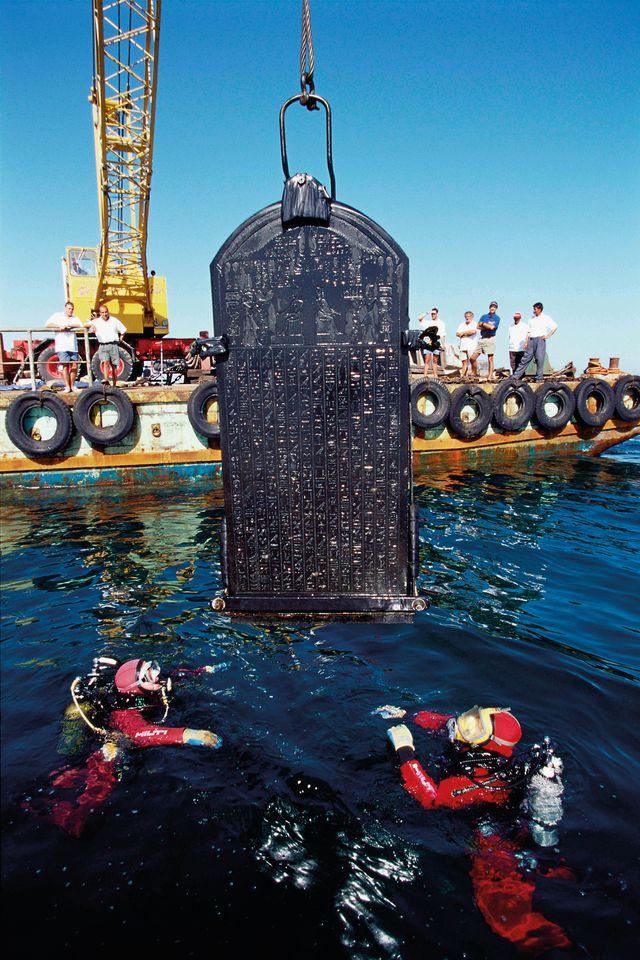 The discovery in 2001 of this perfectly intact stele, a rare find in Egypt, was the proof needed finally to determine that Thonis-Heracleion was in fact one city. Christoph Gerigk; © Franck Goddio/Hilti Foundation 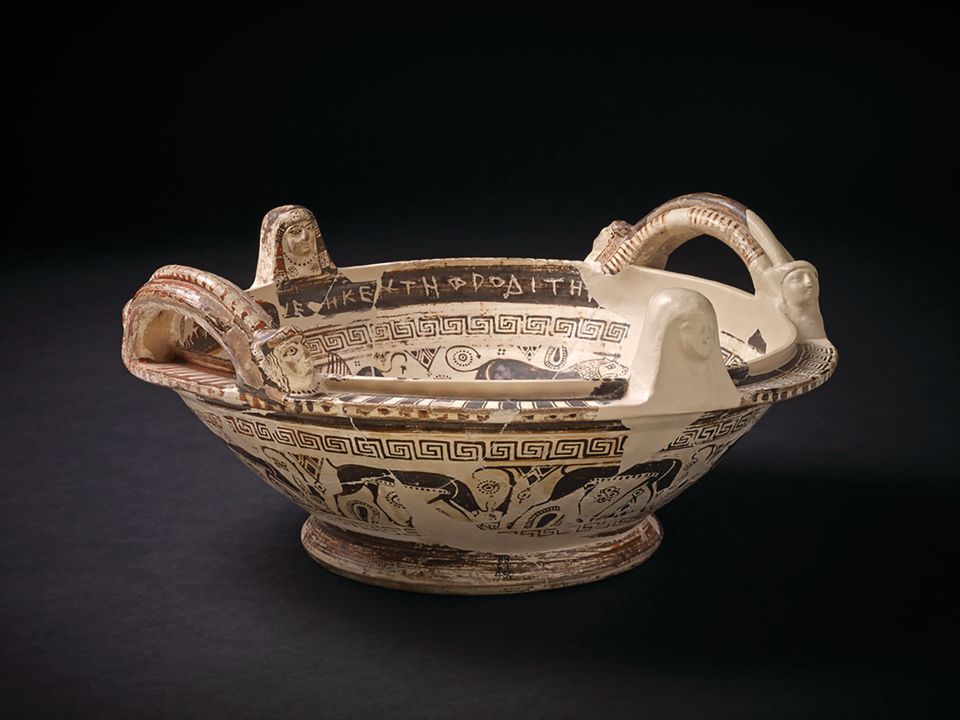 This Greek bowl from the late seventh century BC was found in the sanctuary of Aphrodite at Naukratis, the sister harbour town of Thonis- Heracleion. Christoph Gerigk; © Franck Goddio/Hilti Foundation

This Greek bowl from the late seventh century BC was found in the sanctuary of Aphrodite at Naukratis, the sister harbour town of Thonis-Heracleion. The British Museum has been excavating at the site, which was first dug by the English Egyptologist William Flinders Petrie in 1884, since 2012. It is trying to change the long-held perception that the city was an isolated Greek colony, says the curator Aurélia Masson-Berghoff. “The problem with this historic excavation is that it put so much focus on the Greek presence in Naukratis that they misinterpreted the site,” she says. “Yes, it was a Greek trade port, but it was also an Egyptian city. When Alexander the Great arrived in Egypt [in 332BC], there already had been centuries of interaction between the Greeks and Egyptians.” As part of its research, the museum has created an online catalogue of more than 17,000 objects found in Naukratis, now dispersed in 70 collections worldwide. 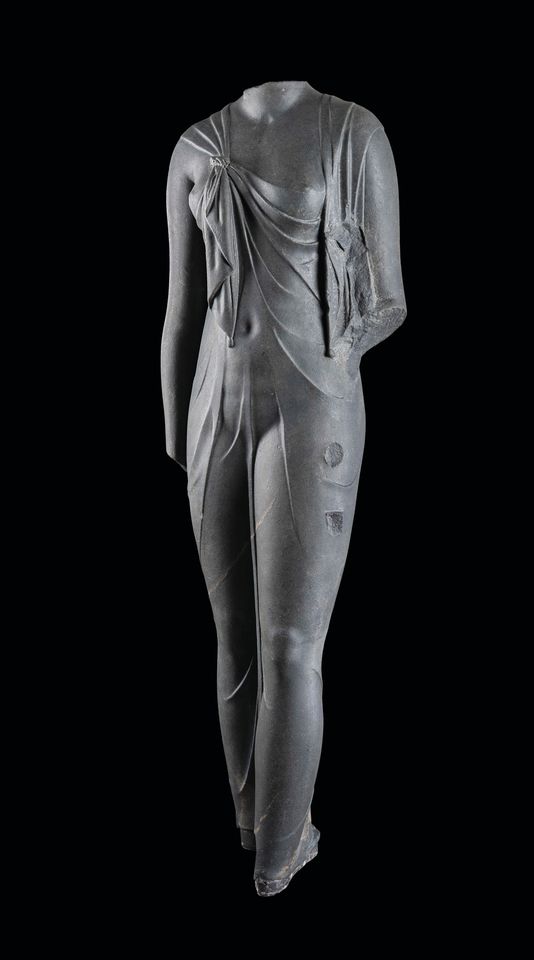 Goddio calls this slightly larger than life-sized statue of the Ptolemaic queen Arsinoe (probably Arsinoe II), who emerged from the sea in wet, transparent clothes, as “one of the most beautiful statues in the world”. The rendering of the flesh of this Greco-Egyptian piece, which dates to the third century BC, is comparable to that of the fifth-century BC statue of Venus Genetrix by the Athenian sculptor Kallimachos. The sculpture, made of diorite, was found in Canopus.