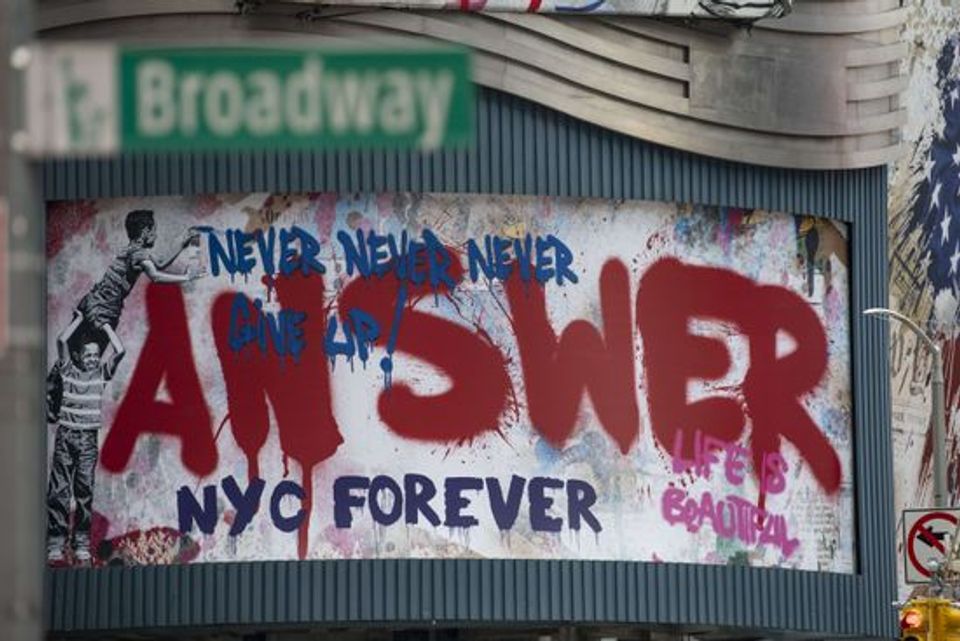 Graffiti art in New York's Broadway theatre district, which has been shuttered since March. Kostas Lymperopoulos/CSM

As a second stimulus plan stalls in Congress for another week, the US creative economy is sinking to all-time lows amid ever-rising Covid-19 cases. A new report published today by the Washington, DC-based think tank the Brookings Institution estimates losses of 2.7 million jobs and more than $150bn in sales of goods and services for creative industries nationwide, which range from film and fashion to fine and performing arts.

Indeed, it is the latter two categories that have been “disproportionately” affected by the coronavirus pandemic, the study finds, suffering estimated losses of almost 1.4 million jobs and $42.5bn in sales. That represents 50% of all jobs in those industries and more than a quarter of all lost sales. And creative occupations in the fine and performing arts—which include the visual arts, music, theatre and dance—represent roughly a third of wage employment losses.

Titled Lost Art: Measuring Covid-19’s devastating impact on America’s creative economy, the report does not offer an entirely clear picture of the visual arts as a discrete industry. But it does estimate losses for the 20 largest creative occupations, among which jobs in the fine and performing arts combine for 26% of all estimated losses in employment and 29% of total estimated losses in average monthly earnings for all creative occupations.

Musicians and singers are estimated to be hit hardest, followed by writers and authors and then actors. Fine artists—including painters, sculptors and illustrators—are the fifth group most affected by income loss, with an estimated 123,639 jobs eliminated and cumulative earning losses of $1.7m per month. Photographers, listed separately, account for 390,416 job losses and more than $16m in lost wages each month.

Authors Richard Florida, a professor at the University of Toronto and author of The Rise of the Creative Class and The New Urban Crisis, and Michael Seman, an assistant professor of arts management at Colorado State University’s LEAP Institute for the Arts, arrived at their findings by analysing jobs and economic data collected from April through July.

“Although these results are at best sobering, the Covid-19 crisis offers an opportunity to look at how the creative industries operate in the US and the existing policy directed towards them," Seman tells The Art Newspaper. "A large number of the most creative, skilled, and savvy people in the country are out of jobs simultaneously. How can we harness that resource and develop collaborative projects and programs for them that might foster interdisciplinary work, enhance skills, and result in innovation in process and product? Think along the lines of what Tokyo’s teamLab and France’s Théoriz Studio are exploring and creating. Perhaps this is the time to incubate a ‘Creative Economy 2.0’ across the United States that is inclusive, interdisciplinary, and intersectoral.”

In the report, Seman and Florida argue that culture and creativity are one of three key sectors (along with science and technology as well as business and management) that drive regional economies. For that reason, the study offers a valuable snapshot of losses by state and specific geographic areas, especially in regions that have a high concentration of creative jobs. California leads all other states in estimated losses of jobs (453,332) and sales ($43.1bn) in the creative industries between April and July. It is followed by New York, with a loss of almost 280,000 jobs and $26.8bn in sales. Texas is in third place with estimated losses of just over 190,000 jobs and $7.3bn.

The authors are quick to note, however, that these large losses reflect the size of these states. “To control for this, we looked at the percentage of job and sales losses in each state rather than the number,” they explain. New York then drops to 21st place, California to 46th and Texas to 31st. The states affected the most by percentage are all smaller states including Alaska, Nevada, New Mexico, Wyoming, Maryland and Vermont, where creative industries have contracted by more than 34%. The vast majority of other states, however, report similar cultural job losses (between 31% and 33%).

The top ten metro areas account for 36% of all lost jobs and 42% of all lost earnings nationwide. Together, New York and Los Angeles will lose an estimated 400,000 jobs and more than $15bn.

Entertainment, leisure, hospitality and retail industries may have suffered the biggest initial losses in employment when the pandemic hit, but the Covid-19 crisis “has left no industry untouched”, write the report’s authors. “It is the biggest shock to the US economy since the Great Depression.”

Since the pandemic shuttered businesses around the world in March, many in the arts and culture sector have been quick to suggest the need for a 21st-century New Deal programme to provide financial relief and work opportunities to artists. Seman and Florida echo the need for more government support for creative industries in the report’s conclusions, noting that federal recovery measures should include more substantial support for arts, cultural, and creative organisations, “as they do for other impacted industries”.

Moreover, they add that greater support for creative labourers—many of whom are self-employed or contract workers, and therefore not adequately represented in job-loss data—is paramount to economic recovery. “It is time to consider direct stipends for artists, something that the National Endowment for the Arts is not permitted to do,” they write. “Any additional infrastructure funding should also include artists and creatives in ways similar to the New Deal-era Federal Art Project of the 1930s and 1940s.”