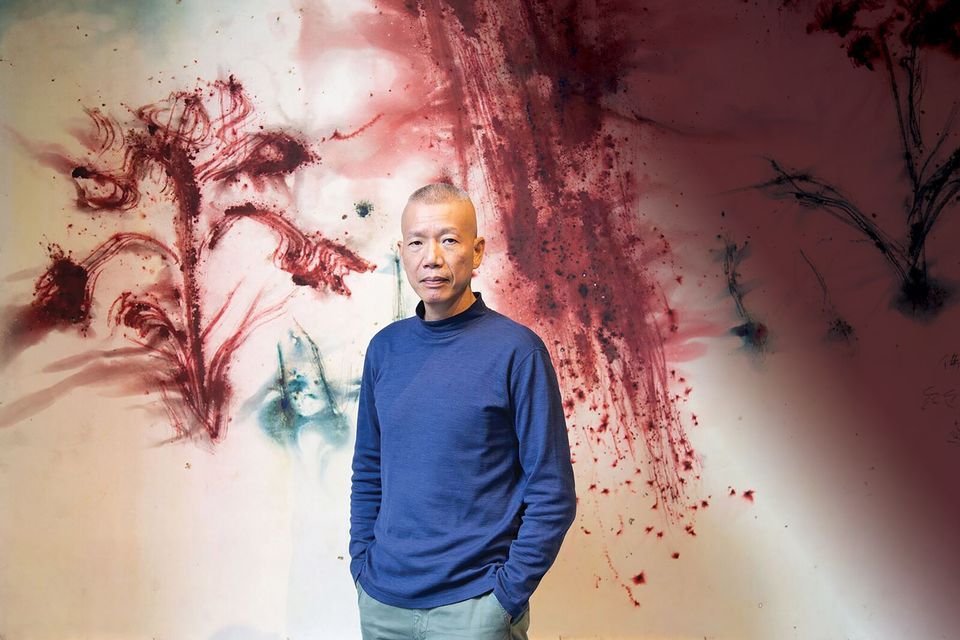 The restlessly inventive artist Cai Guo-Qiang is known for his radical experimentation with materials—especially gunpowder, which he has used to ignite his drawings and to stage explosive events outdoors for awestruck viewers around the world. Crucial to his process is the element of surprise: a level of uncertainty and suspense about exactly what effect his detonations will have on his works on paper, for example, or how smoke will billow in ephemeral events like his project to extend the Great Wall of China with two fuse lines. But recently Cai became curious about another uncertainty: how his coloured gunpowder paintings will hold up over time.

To find out, the Chinese-born artist contacted the Getty Conservation Institute in Los Angeles in early 2016, asking its staff to take a look at the works that he had started making by detonating daytime fireworks on canvas the previous year. “We thought, ‘That’s great,’” says Rachel Rivenc, an associate scientist at the institute. But the organisation had a counterproposal, she says: to investigate the full range of the artist’s oeuvre, including his early, more tentative oils, transitional works, black gunpowder drawings and visceral museum installations as well as the coloured gunpowder paintings.

The goal was to produce a book about Cai for The Artist’s Materials series issued by Getty Publications. So far every book has centred on a US or European artist who is no longer living: Willem de Kooning, Jean-Paul Riopelle, Lucio Fontana and Hans Hofmann. “We wanted to include more contemporary artists and a more diverse range and radical use of materials,” says Rivenc, who is leading the Cai study.

Since then the institute has burrowed into the artist’s oeuvre and discovered that his works are surprisingly durable.

Cai, an energetic international traveller who is based in New York, is perhaps best known for his gunpowder drawings. The artist sketches on high-quality Japanese paper placed on the floor, often also laying down stencils he has cut out from cardboard. Sometimes he adds foliage or garments like abayas (for Memories (2011), presented in Doha, Qatar) to the mix. Then he sprinkles gunpowder carefully around the lines, covers the ensemble with sheets of cardboard weighed down with bricks or rocks to control the force of the explosion, and lights the fuse. As onlookers watch tremulously, a blast ensues, and once assistants have stamped out embers and the smoke has cleared, the singed residue of the “drawing” is visible. 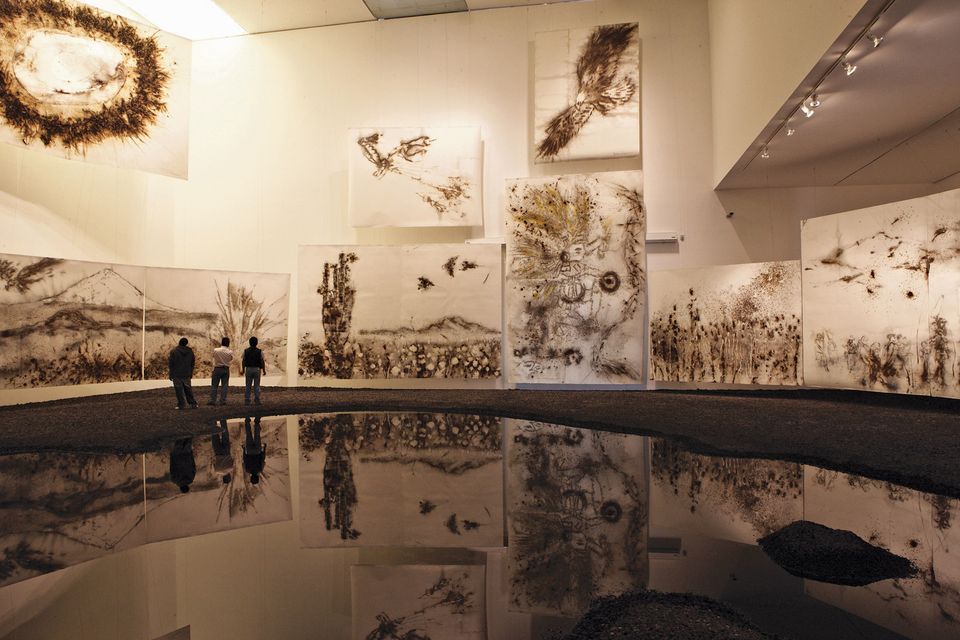 Beyond delving into processes like this one, the Getty was interested in exploring how Cai’s thinking, rooted in Taoism, alchemy, feng shui, astrophysics and cultural history, relates to his materials, and how he envisions his works lasting in years to come. To that end, researchers have conducted probing interviews with the artist and recorded oral histories, with Rivenc crisscrossing the globe–even travelling to Cai’s birthplace of Quanzhou in China to gain insights from the artist’s early mentors. For example, gunpowder, thought to have been invented in China in the ninth century, offered Cai a philosophical “opportunity for liberation” from “a timid and cautious personality”, she says, as well as a way to invoke the material’s association with traditional Chinese medicine. “Sometimes these dialogues were quite personal,” Cai says. “In turn, those interview questions helped me to reflect on myself.”

The artist allowed the Getty scientists to take microscopic samples from some of the early figurative oils and gouaches executed in China in the early 1980s, often with paints he made on his own, and to chemically analyse the pigments. Limited mostly to whites and earth tones, they posed “no special conservation challenge”, Rivenc reports.

The Getty also took samples from transitional paintings in which Cai mixed gunpowder and realgar, an arsenic sulfide, into oil and acrylic paint, a process he started in China and continued when he moved to Japan in 1986. (He remained in Japan until 1995, when he resettled in New York.) When lit, the material did not detonate but rather sizzled, leaving “an interesting surface typography”, Rivenc says. Those works also proved “pretty stable” when tested, she adds.

One of the advantages of working with a living artist was his enthusiastic participation. For research into the gunpowder drawings, Cai created ten-inch by ten-inch test canvases for the Getty, sprinkling them with the range of gunpowders he uses and detonating them before shipping the works to Los Angeles. That enabled the scientists to conduct a battery of tests. Using a microfadeometer, which includes an optical fibre that focuses an enormous amount of light onto the test surface, and a weatherometer, which subjects the work to cycles of light, humidity and temperature, they studied how the materials would age. 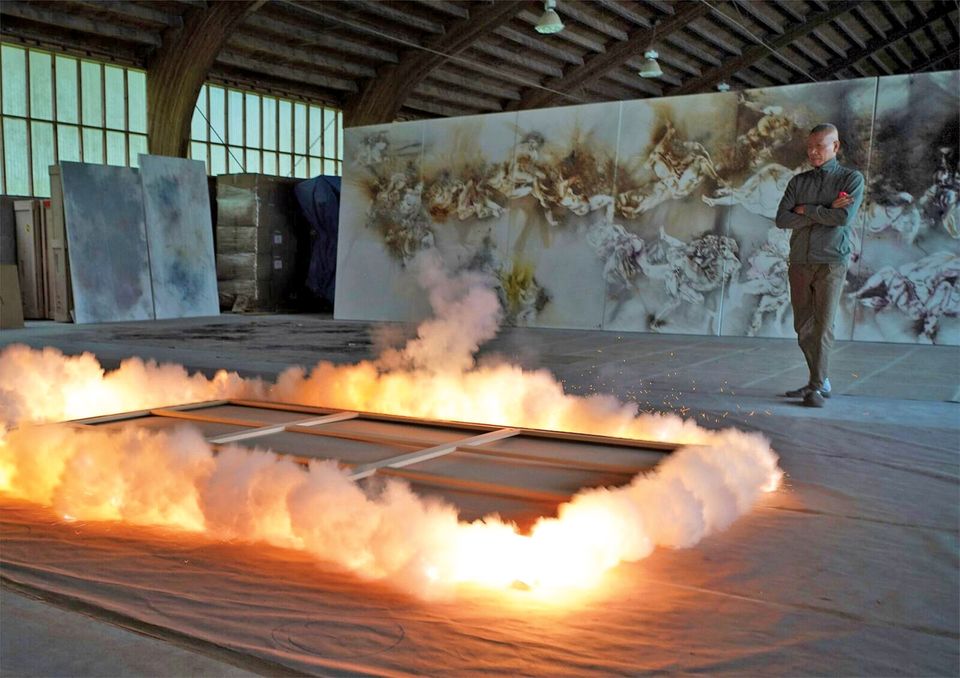 Rivenc says the gunpowder held up well. “It seems fairly stable,” she says. “After it’s detonated, it might fade a bit over time but nothing dramatic.” She recommends that owners and curators treat the gunpowder drawings as if they were executed in pastels or charcoal, handling them with care and guarding them from direct sunlight.

For the so-called coloured gunpowder paintings, Cai attaches canvas to a stretcher, sketches and applies stencils, and sprinkles coloured daytime fireworks ingredients over the surface before lighting a fuse. They do not detonate as strongly because up to 40% of the fireworks material consists of dye, reducing the explosive element, Rivenc says. Tests with the microfadeometer and weatherometer showed that some of the dyes are particularly light-sensitive, including some red tints, but will not be affected if proper precautions are taken, she adds. (A rich selection is currently on view in Flora Commedia, an exhibition of Cai’s work running until 17 February at the Uffizi Gallery in Florence.)

Cai compares the Getty institute’s solicitude over the works to treating an illness. “GCI dissects my works as if they are performing anatomical surgeries to examine the inner structure, bones, DNA and cells to obtain deep understanding of my body and ‘health’”, he says. “For me, it’s like you are in love with someone: although she has some serious illness, you will still love her, and meanwhile think about how to better take care of her.” 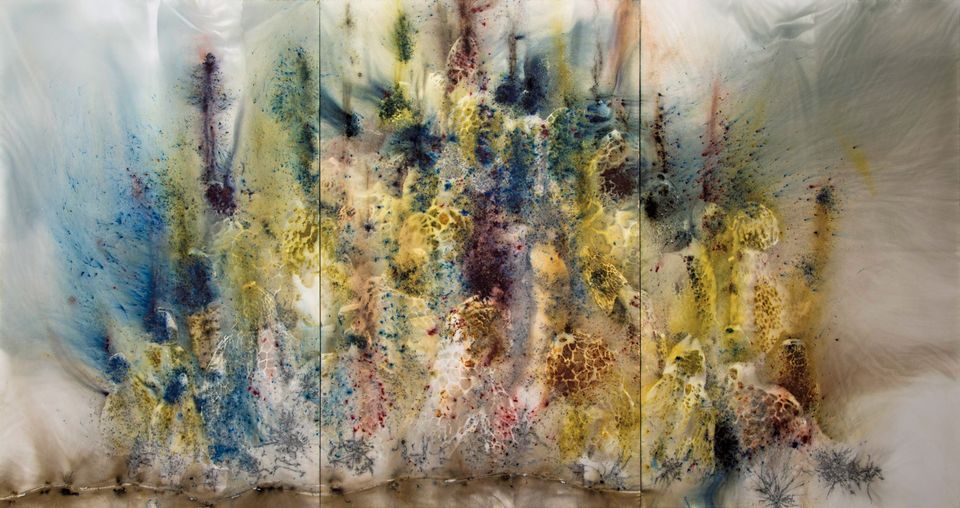 At the same time, he says he is “not too concerned” about the colourfastness of the works. “Ancient Roman sculptures and murals and cave paintings in Dunhuang caves [in China] were painted in colours thousands of years ago,” Cai says. “Some of them have undergone conservation treatments to restore original colours. But after seeing those, I still feel as though the faded colours that carry the footprint of history look more enchanting.”

Overall, Rivenc says, she was impressed by the stability of Cai’s materials. “When you think that these materials were meant to be used for an event that only lasts a few minutes and never to be laid on canvas, it is surprising how durable they are,” she said.

“It’s incredible to be working with a living artist who’s very interested in this,” she adds. “With de Kooning and Fontana, there was no back and forth: You come as close to truth, if there is a truth, with a net of clues. With Cai we can really have a dialogue.” In September the artist flew out to visit the Getty conservation labs, inspecting the equipment and chatting with the scientists.

Rivenc also has begun exploring Cai's daring installations, works as diverse as Head On (2006), in which life-size replicas of wolves lunge at a glass wall, and Inopportune: Stage One (2004), in which nine Ford Taurus cars dangle from the ceiling. They present “a whole different set of problems”, she said, like how to reinstall a piece that was originally site-specific and whether some elements should be replaced or repaired.

Meanwhile, the artist's experimentation with new materials continues. Recently he began detonating gunpowder on tempered glass, giving the Getty researchers yet another medium to test and ponder.

Rivenc emphasises that the Getty is not trying to influence Cai's choices. “In terms of conservation, it’s more like giving Cai the basis for an informed decision,” she says. “We don’t want our findings to hinder his artistic freedom.”