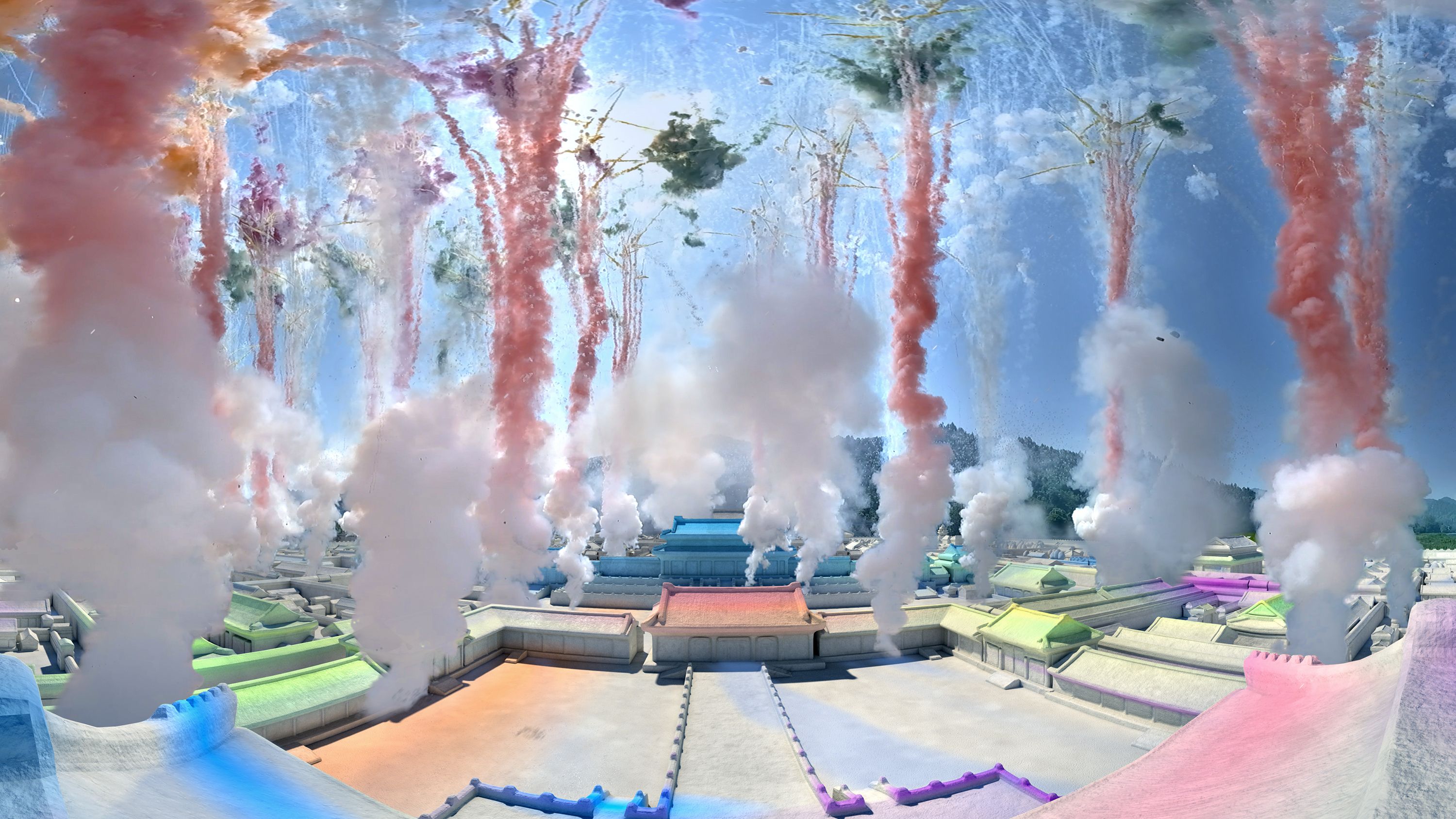 Cai Guo-Qiang’s spectacular retrospective in Beijing’s Forbidden City, opened last week although to only private fanfare. Part of the palace's 600th anniversary commemorations this year, Odyssey and Homecoming (until 5 February) displays five halls of paintings, video and documentation by the 63-year old Chinese artist. But Cai’s signature firework installations were impossible over the imperial palace—a collection of some of the oldest and largest wooden structures in the world.

The exhibition—curated remotely by the Columbia University historian Simon Schama and co-organised by the Beijing Winter Olympics Committee and the Palace Museum—therefore ends not with a bang but with some tech. Working with Taiwan’s HTC Vive Arts since last year, Cai and his studio have created a virtual reality (VR) and video piece, Sleepwalking in the Forbidden City. Visitors can queue to use the four Vive headsets for a fully immersive experience, set alongside the alabaster model of the palace used to create the work and its five-minute video rendition. Speaking to The Art Newspaper at his Beijing studio in a traditional Hutong courtyard behind the palace, Cai says the work was inspired by a dream he had about one of the Palace Museum’s famous resident cats—the video switches between feline and avian perspectives as a series of pastel explosions transform the snow-covered virtual palace. It is set not in a historic or modern-day Beijing but alongside the lush Liuyang River, where the actual explosions were conducted and filmed.

While the project began last year, “the pandemic further prompted me to consider what my methodology can be when employing an unfamiliar medium that is the high-tech, to dialogue with the invisible world on a spiritual level," says Cai. "My instinct is that since VR can represent the surreal and the invisible, it should be incorporated into my work in a more unique way—a way that gives it its own distinct artistic language." 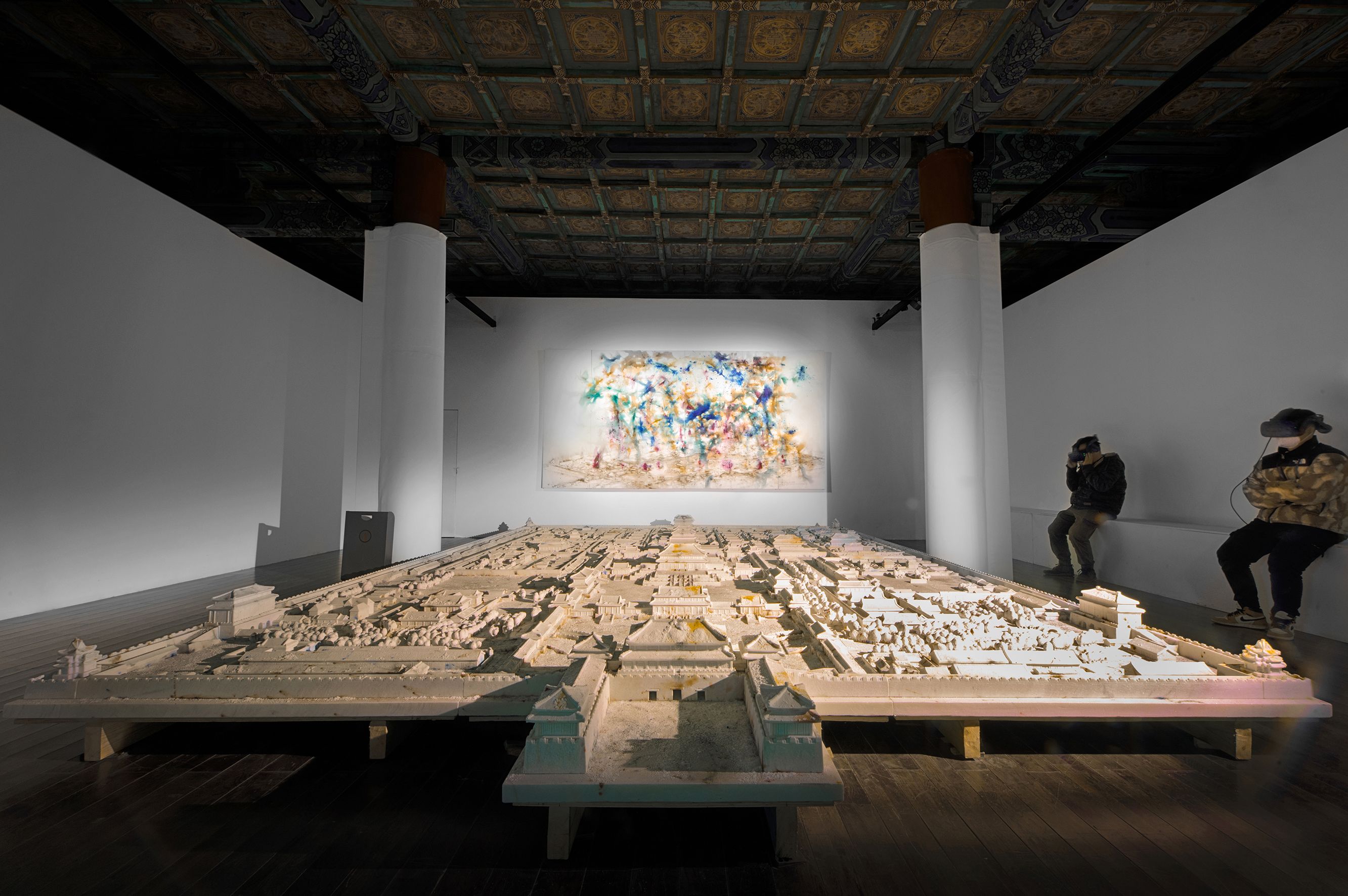 "From the beginning, Cai wanted to use the ancient medium of gunpowder to challenge VR technology’s precision and control," adds HTC Vive Arts director Victoria Chang. “Cai also wanted to avoid the overly sleek look that is sometimes found in digital works, so instead of building a digital 3D model, he collaborated with craftsmen from his hometown and spent five months hand-sculpting a majestic model of the Forbidden City in alabaster, which we then 3D scanned and brought into the virtual space. Additional 3D modelling and CG technologies were used to bring this work to life."

Given the ongoing hostilities between China and Taiwan, it seems significant that a Taiwanese company is collaborating with mainland China's most important state museum. Chang emphasises that their collaboration was with Cai directly, not the museum, highlighting HTC Vive Arts mainland operations and other artistic collaborations in the region including its partnership with Hangzhou-based artist Cheng Ran at K11 Art Foundation in Hong Kong and Shanghai, and Tao Ya-Lun’s show at the Museum of Contemporary Art Taipei.

Art exhibitions within the Palace Museum are a rarity, though the adjacent Taimiao complex has been rebranded as an art museum, showing Anish Kapoor last year. Cai’s exhibition was preceded in the Meridian Gate by Everlasting Splendor: Six Centuries at the Forbidden City (10 September-15 November), displaying over 450 artefacts and photographs. Attendance to Odyssey and Homecoming is limited to 5,000 visitors a day, out of the palace’s daily 30,000 capacity, and there had been little promotion by the museum—while there is a mention and pre-booking link on the Chinese website it is not mentioned on the museum’s Wechat channel or English site. 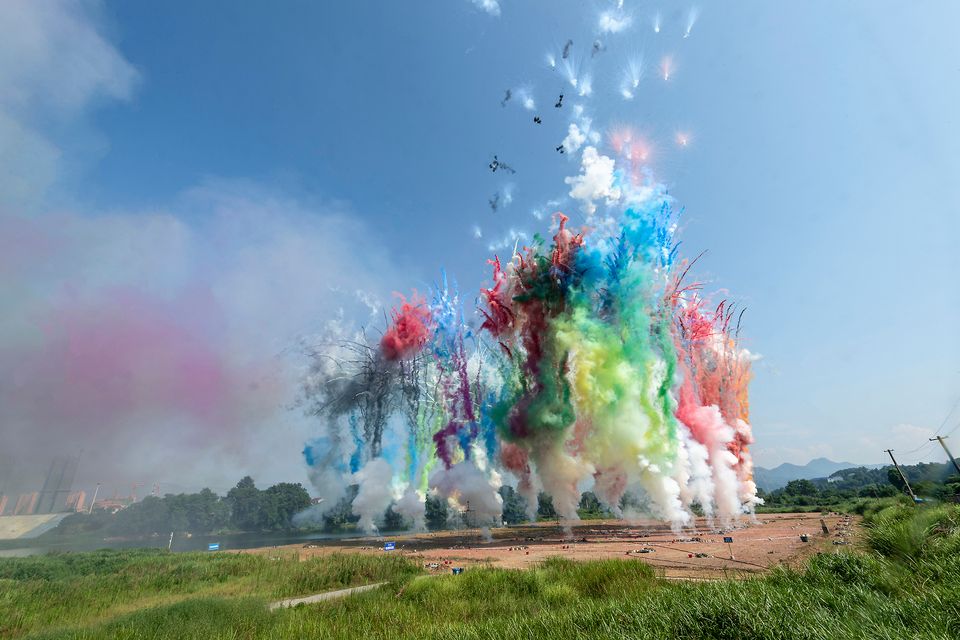 The actual fireworks for Sleepwalking in the Forbidden City were set off by the Liuyang River, China, before being digitally transposed for the VR work Photo: Lin Yi, courtesy of Cai Studio

The exhibition is a literal as well as metaphorical homecoming for the Chinese artist, who only returned to the mainland from the US in November. Cai, though, plays down the influence of his location and birthplace: “I don’t think I need to emphasise my Eastern origin and characteristics. I’m from China, and I grew up in [Fujian Province’s] Quanzhou. There is also no need to make myself look more international, as I am traveling beyond the realm of this world to dialogue with the extraterrestrials," says Cai.

Cai describes how 2020 has not shaken his three-decade practice of making art for aliens. "I still feel that I should go back to the more fundamental aspect, which is our universe. We are naive children within the vast universe; the human race and our planet are all quite fragile. We can easily break our ecological environment—we meddle with it so much that we can easily damage the planet if we’re not mindful."

Cai mostly planned the Forbidden City project from his Frank Gehry-designed farm in New Jersey, where instead of his usual globetrotting he has “spent months [...] looking at the animals, flowers and plants of America, seeing nature as it is, with foxes running around". Cai says he waited until after the presidential election to come back to China. Though he was unable to vote as a non-citizen resident he "very much wanted to witness the election, because it is a real and potentially life-changing event happening in front of us in the 21st century. It is not only a matter for the US, but also a concern for all of humanity", he says. However, he pessimistically concludes: "even when new elected officials come into office, in general, humanity is still confronted by the same problems”.