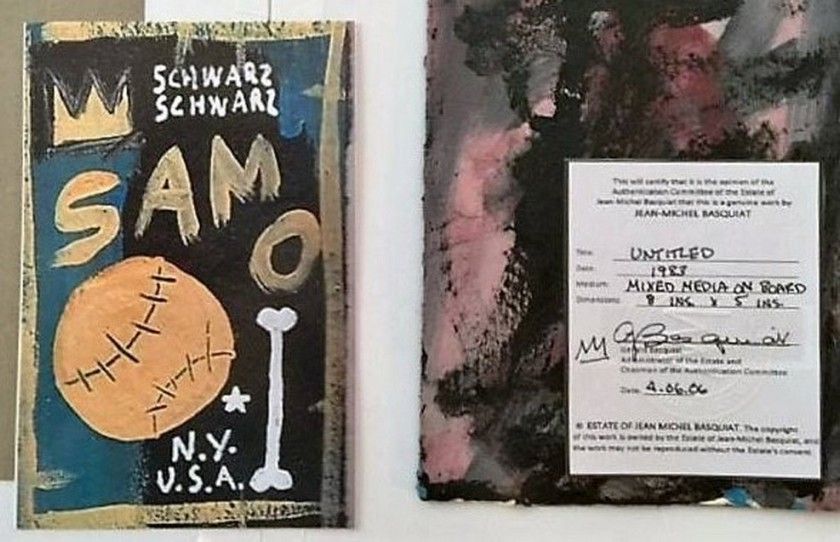 Philip Righter tried to sell this fake artwork by Jean-Michel Basquiat, the US attorney says. AP

A West Hollywood man accused of attempting to sell fraudulent paintings to a South Florida gallery was sentenced to five years in prison by a Miami federal court on Wednesday.

Philip Righter, 43, pleaded guilty to three felony charges—wire fraud, aggravated identity theft and tax fraud—in a case filed in Los Angeles. He admitted to selling works he falsely claimed were created by artists such as Andy Warhol, Jean-Michel Basquiat, Keith Haring, Kurt Schwitters and Roy Lichtenstein. According to a statement from the US Attorney’s office, Righter also admitted to using the fake art as collateral for loans on which he later defaulted, and using “bogus” pieces for fraudulent write-offs on his income tax returns.

In total, Righter’s scheme attempted to swindle buyers out of around $6m, and he caused losses of at least $758,265 known to date. Additionally, his fraudulent tax returns resulted in $100,000 of unpaid taxes to the Internal Revenue Service (IRS), according to a plea agreement in the case.

In addition to the five-year felony sentence, US District Judge Marcia G. Cooke of the Southern District of Florida also handed down another sentence of 60 months in federal prison in another case involving Righter filed by prosecutors in Miami. Righter pleaded guilty in that case in March and admitted trying to sell Haring and Basquiat forgeries to the owner of a Miami art gallery, which remains unnamed in the court documents. Both sentences will run concurrent to each other.

Righter ran a fraud scheme in California up until 2018, in which he attempted to sell counterfeit or fake art as genuine works by famous artists. To make the pieces appear authentic, he used custom-made embossing stamps that were similar to those used by the estates of Basquiat and Haring on provenance documents he created, according to court papers. He also created fake gallery labels falsely identifying works as having been purchased from the New York-based Annina Nosei Gallery, a real dealership known for selling works by Basquiat and other artists.

In a bid for leniency from the judge, Righter’s defense attorney suggested that there was nothing “especially complex” about his fraud scheme, as the US Attorney claimed. "Mr Righter simply logged onto the Internet and purchased artwork from, among other sources, eBay,” the documents say. “All that was required was a computer with an Internet connection and some knowledge of these well-known artists’ styles, works, and biographies, as well how letters of authenticity and provenance documents look and function (which could also be achieved through a series of Internet searches). The Haring and Basquiat estate embossing seals, though designed by Mr Righter, were also simply ordered from a commercial rubber stamp company."

Yet Righter’s schemes grew increasingly more complicated and malicious. At first, he sold the works under his own name, but when he was interviewed by the Federal Bureau of Investigation (FBI) Art Crime unit and the Los Angeles Police Department about a fake Haring work he tried to sell to the unnamed Miami gallery in 2016, he began using the names of other people and organisations, the court documents say.

Also, Righter received or tried to obtain numerous loans by using the fake art and provenance documents. For instance, in February 2016, he submitted an application to an online lender, identified as “P.G.” in the court documents, a made up provenance document identifying a work as Roy Lichtenstein’s Seductive Girl (Study), saying it had been purchased for $103,200, and another work he said was by Keith Haring, which turned out to be a fake. The lender agreed to provide a loan of $5,000 against the Haring. When Righter defaulted on the loan, the lender sold the work through Leslie Hindman Auctioneers for $50,000; the auction house lost $35,351 on the transaction when the fraud was later discovered. Similarly, in August of that same year, Righter obtained a $270,000 loan against the fake Lichtenstein from another lender identified as “E.C.”. Once again, Righter defaulted and the lender took the work to an unnamed auction house, which deemed it a fake.

The court documents also outline several attempts by Righter to sell fake works of art. In May 2017, under the names of a father and son duo, he offered a UK buyer two works purportedly by Basquiat totalling over $1m. The collector wired Righter a deposit of £120,000 ($151,484) before discovering the works were fakes.

And in August of the same year, once again using another person’s name, Righter listed a piece purported made by Basquiat in 1983 with the word “Samo”—the artist’s well known street tag—written on it with an art sale website identified as “A.B”, providing fake provenance documents he said were from Annina Nosei gallery. The website sold the piece for $50,000 to a buyer in Dubai. In 2018, after the piece was determined to be a fake, the website had to refund the purchase price to the buyer and lost the $37,970 that they had already sent to Righter for the sale (minus the site’s commission) for a total loss of around $88,000. Righter also sold another purported Basquiat to an Arizona buyer through the website for $90,000, whom the website also had to refund.

In 2018, under yet another person’s name, Righter attempted to sell two more purported Basquiat works to a gallery identified in the court papers as “S.W. Gallery”, which offered him $990,000 for both. The gallery discovered that the works were fraudulent before the sale went through, after contacting Annina Nosei directly to verify the certificates of authenticity.

Righter also admitted to the court that he knowingly and willfully included a false W2 and documentation of a donation of fake art to a charity on his 2015 federal income tax return, which resulted in him receiving a refund of $54,858. Righter then signed and filed a false 2015 amended tax return, in which he claimed a loss of $2,575,000 related to art he said had been stolen. In truth, the art was fake and had no value. This fraudulently amended tax return resulted in carryback refunds for 2012, 2013 and 2014 totalling $52,485, according to court documents.

In the Florida lawsuit, Righter offered to sell the fraudulent Basquiat and Haring works to a South Florida gallery, auction houses and others under another name. When the gallery owner showed interest, Righter (who was still in Los Angeles) shipped a number of the forgeries to a warehouse in South Florida. Righter’s price for the forgeries was $1,056,000 and he directed the gallery owner to wire the money to his own bank account. He pleaded guilty to one count of mail fraud and one count of aggravated identity theft. The works in both cases have been seized by the FBI.

Germany boosts art acquisition budget to €3m from €500,000 to support artists and galleries

Germany boosts art acquisition budget to €3m from €500,000 to support artists and galleries

Summer Reads: which books are Oxford librarians poring over by the pool?

Summer Reads: which books are Oxford librarians poring over by the pool?