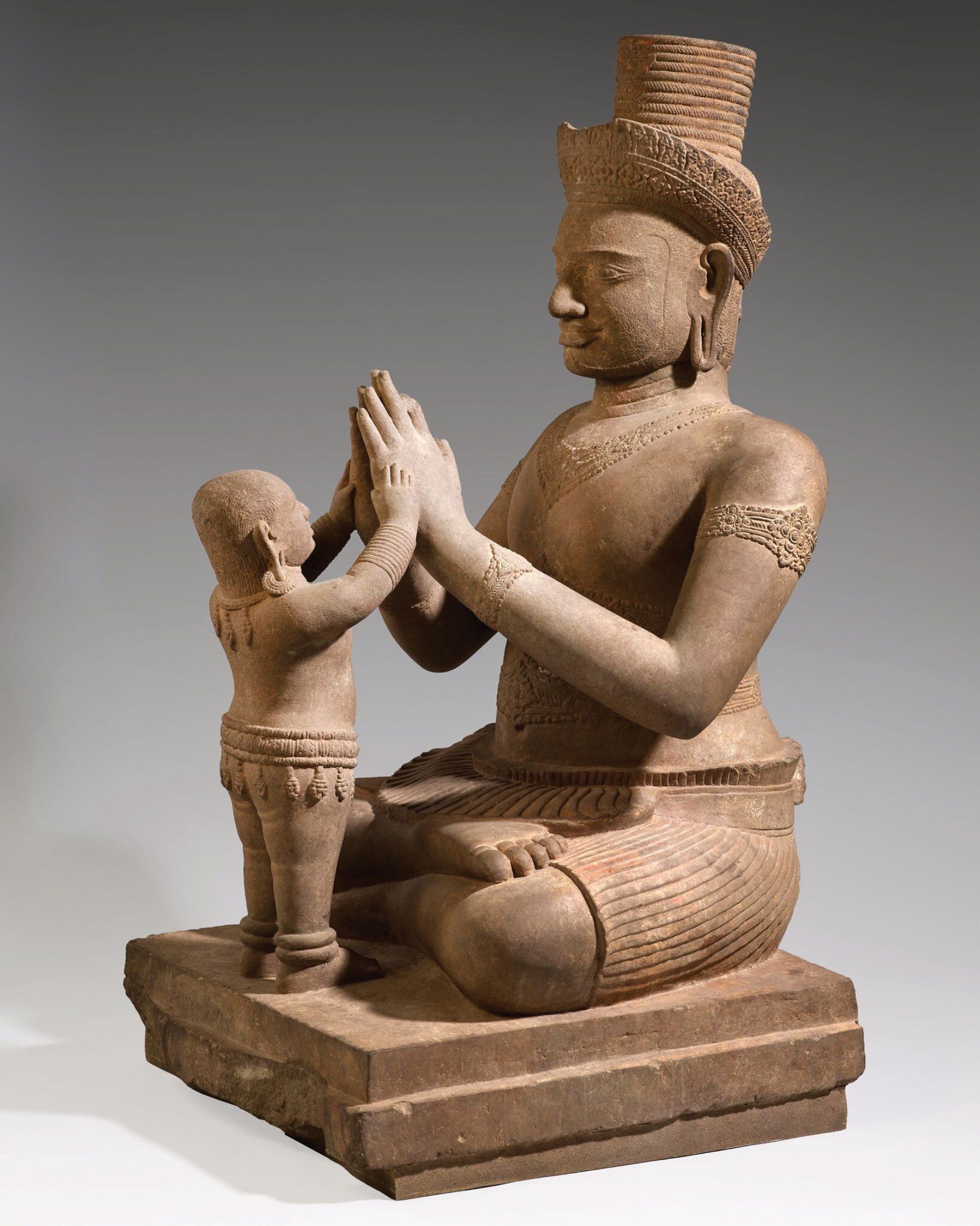 A sandstone figure of Shiva and Skanda, which featured on the cover of a book co-authored by Latchford, one of the objects his daughter has already agreed to ship from the UK to the National Museum in Phnom Penh Photo: Matthew Hollow, Royal Government of Cambodia

The restitution of Douglas Latchford’s Khmer art collection to Cambodia, announced six months after his death by his daughter and first reported by the New York Times, follows years of secret negotiations. But, according to information provided to The Art Newspaper by those involved, the deal struck with Cambodia does not end the US federal investigation into Latchford’s business operations. Considering that the Cambodians have been promised access to his archives, and would be able to share their content with the US authorities, it might even renew pressure on US museums and collections that acquired art pieces from the prominent dealer and collector to examine their provenance more closely.

Douglas Latchford, a dual citizen of the UK and Thailand, died in Bangkok on 2 August, aged 88, eight months after he was indicted by the US Attorney’s Office in New York’s Southern District for his alleged role in trafficking Southeast Asian antiquities since the 1970s. Now his daughter, who prefers to use her Thai name Nawapan Kriangsak to protect her family’s privacy, has agreed to turn his collection over to Cambodia in stages.

“The entire collection,” she confirms, “is now the property of Cambodia, including the most valuable items which have been in storage in the UK. This includes many items with clear provenance, bought from auction houses or collections all over the world, as well as those with an unreliable provenance. And it also includes works which belonged to my father, but may be held by third parties. All of it is going home.”

As a preliminary gesture, Kriangsak arranged for Cambodian officials to view the collection in Bangkok and she subsequently delivered 25 pieces to them. Five other major sculptures are being shipped from the UK to the National Museum in Phnom Penh, including a sandstone figure of Shiva and Skanda, which was featured on the cover of Adoration and Glory, the publication Latchford co-authored with the scholar Emma Bunker. Cambodian authorities are especially keen to retrieve such pieces, which are believed to come from the temple complex at Koh Ker, briefly the Khmer capital during the tenth century. 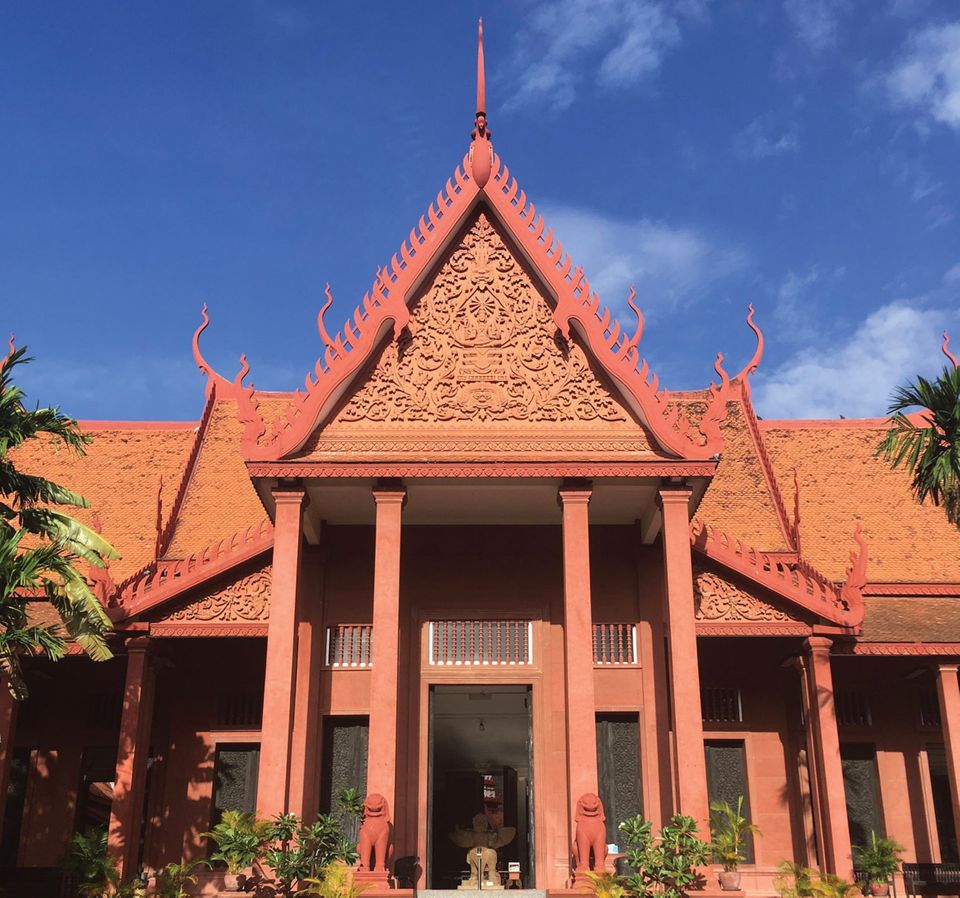 In Phnom Penh, culture minister Phoeurng Sackona celebrated this “historical event”, which will see more than 100 stone statues and dozens of minor artefacts returned to Cambodia, as per an agreement signed on 18 September. The collection will be exhibited at a new extension planned by the National Museum. The minister also praised “the invaluable contribution of the US authorities”, which “heralds strong prospects of future co-operation”.

“We have come a long way to reach this agreement,” Kriangsak acknowledges. “Cambodia had already discussed the return of artefacts with Douglas Latchford,” says Bradley Gordon, an American attorney representing the kingdom, “but the situation changed when his daughter decided to return the entire collection, without exception, irrespective of provenance.” He adds that, in the past three years of discussions, Kriangsak has never asked for immunity in return, nor requested her father be cleared of any wrongdoing.

None of this collection was sequestrated or claimed in any legal action. The collection simply became a burden to me Nawapan Kriangsak

“A key, maybe overlooked, part of the agreement is that his daughter is making Latchford’s records available to Cambodia, which include information on his own collecting and his knowledge of other pieces in circulation across the world,” says Charles Webb, a consultant who was also part of the negotiation. “There have been many often unsubstantiated claims about him which need proper examination. The information will help Cambodia separate mythology from fact, and track its own heritage across the world. Ms Kriangsak is supportive of this.”

Kriangsak says the decision “was not made at gunpoint: none of this collection was sequestrated or claimed in any legal action. The collection simply became a burden to me.”

Other sources involved in the negotiations since 2016, who have asked to remain anonymous, suggest that another motivation might have been to ease pressure on the family as investigations continue into Latchford’s business dealings. “The investigation is not only targeting pieces which may have been acquired in America,” the source says. “It also deals with the revenues Latchford might have extracted from his alleged trafficking, estimated at up to $100m.” A representative of Latchford’s family described this figure as “crazy” and says that Kriangsak “has nothing to fear from the ongoing US investigation of her father’s business”. The US Attorney’s indictment against Latchford for wire fraud, smuggling and conspiracy calls for the forfeiture of “any and all property” resulting from the alleged crimes as well as any proceeds “traceable to the commission of said offenses”—and the federal investigation is due to continue even after Latchford’s death. 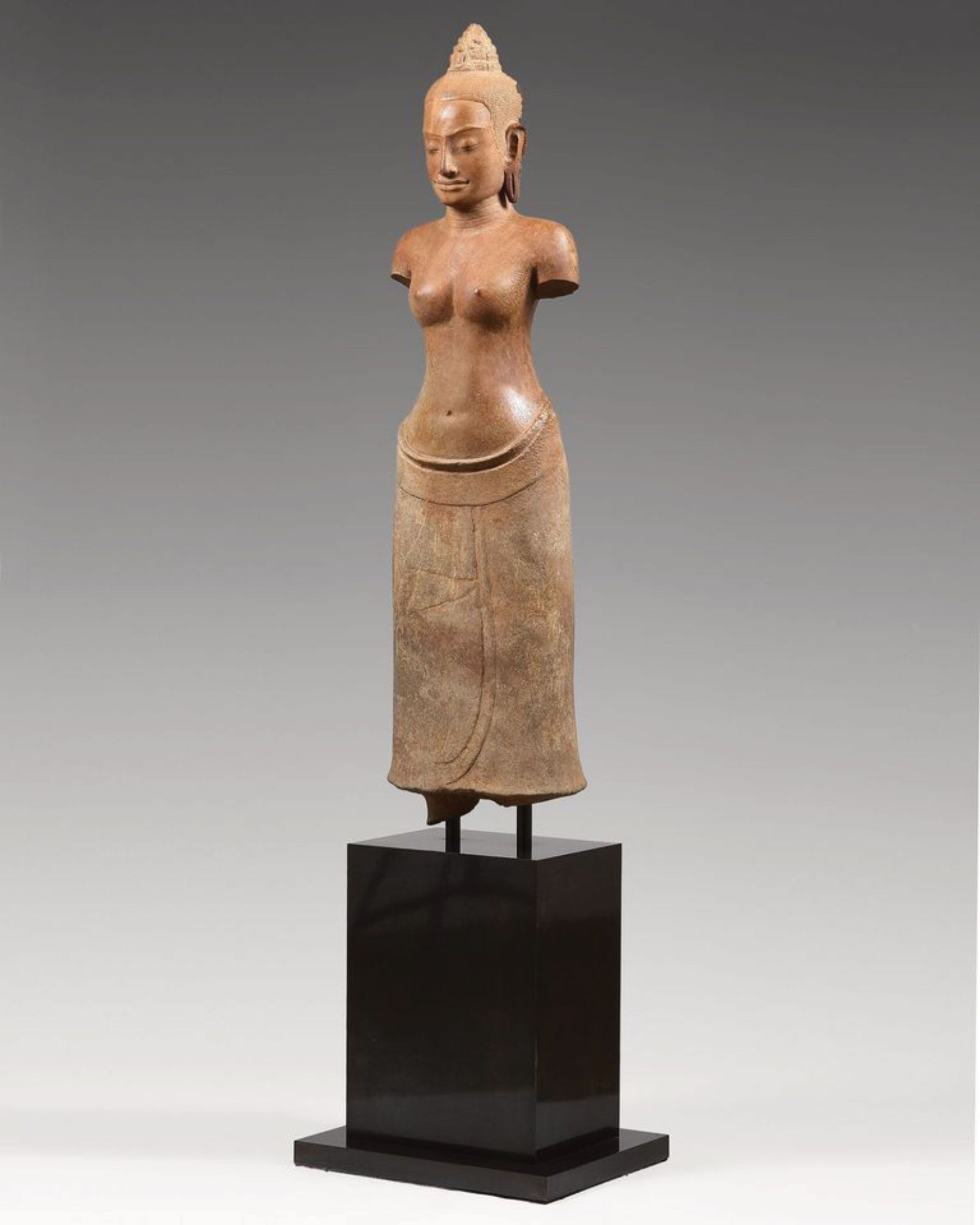 A sandstone female figure from the 12th century is among the objects being returned to Cambodia Photo: Matthew Hollow, Royal Government of Cambodia

The extent of Latchford’s collection has yet to be defined, which further complicated the negotiations. Scholars have pointed out that many works described without provenance in the three books he wrote with Bunker were probably owned by him or his family. Cambodian authorities also had doubts about sculptures identified as property of the “Skanda Trust” or the “Radcliffe Collection”, which could have held items from other private collectors as well.

In a 2014 television documentary, The Stolen Warriors, released just before a rush of statues looted from the Prasat Chen temple were restituted by US museums and auction houses, Latchford said he “has never been part of any smuggling network”, and pledged to “give his collection to the National Museum in Phnom Penh, when the time is right”. Several sources have confirmed that Latchford offered to donate some works over the years to the National Museum, but the number was much more limited and came with onerous conditions, including requests that Cambodia would seek assurances from the US government that Latchford, his family and Bunker “will not face criminal charges”, according to written documents. Cambodia made such a request to the US in May 2018.

According to one source, after Sotheby’s reached an agreement in December 2013 with federal authorities to return a statue of the warrior Duryodhana, Latchford was eager to rehabilitate his good relations with Cambodia. Officials there had been well disposed towards him for years, even awarding him the country’s highest decoration, a Grand Cross of the Royal Order of Monisaraphon, although they were apparently under no illusions as to his past activities. Sok Puthiyuth, the son-in-law of Cambodia’s Prime Minister Hun Sen, was the instigator and driving force behind the recent rapprochement. But the family sought stringent legal terms and protections. Talks dragged on. “Then came the indictment in New York, which changed everything,” the source says.

about 12 hours ago
'Cranach' painting of Venus at centre of Old Masters fakes scandal must be returned to Prince of Liechtenstein, court rules