Artists join forces in bid to swing US midterm elections 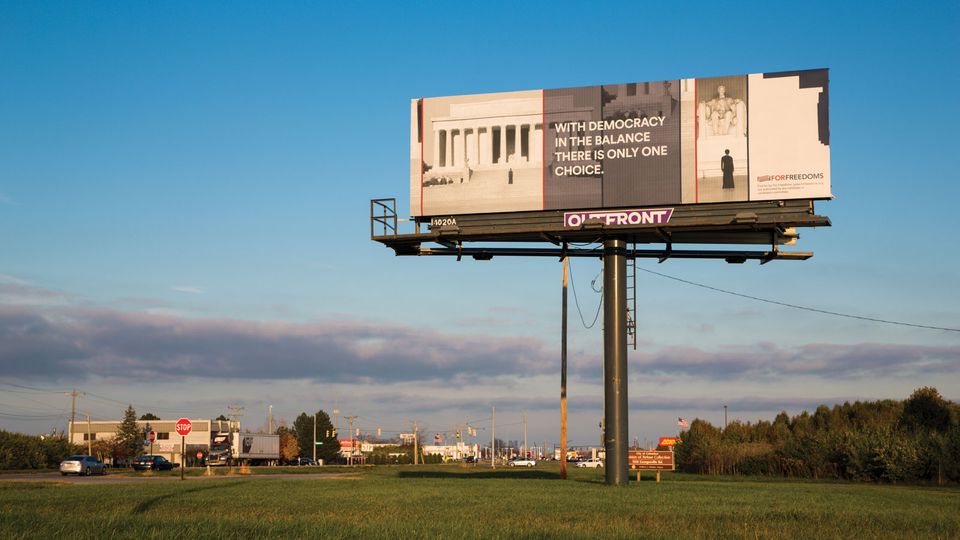 This spring, the artist and activist organisation For Freedoms embarked on what it called the “largest creative collaboration in US history”—the 50 State Initiative, which aims to produce public art programmes centred around civic engagement in the lead-up to the midterm elections on 6 November. In the US’s liberal art centres, the project has found an easy entry, but even in many right-leaning states, it has attracted eager participants and helped to support existing activism.

More than 200 institutions and almost 400 artists have joined For Freedoms’ effort. The most high-profile component is the erection of artist-designed billboards in every state, as well as Washington, DC, and Puerto Rico. This is a particular challenge in the four states that do not allow billboards: Alaska, Hawaii, Maine and Vermont. For Freedoms planned to get around the restrictions by installing banners, but finding a way to hang a large, politically charged image in public can be difficult in conservative places. That is what the artist Kate Wool, who has spent years agitating for gun-safety legislation, has found.

In downtown Fairbanks, Alaska, where Wool lives, “there are a couple of abandoned buildings, and one of them has hung a banner before, when it was owned privately”, the artist says. “Now the city owns it, and they didn’t want to do it.” Wool says she approached the owners of two other buildings, and both requested pictures of the proposed work. When she sent the image—rows of people, including children, wearing gun targets, with the phrase “I am not a target”—the owners said no. “I think people don’t want to touch it,” Wool says.

This is not a total surprise, given that Alaska has one of the highest rates of gun ownership in the country. Wool will show her banners indoors instead, at the Well Street Art Company in Fairbanks (from 5 October), and she is organising a town-hall meeting for opening day. She had worked on a gun-safety project for a few years and the support of a national artist-run group invigorated her. “We’re really far removed up here. Not many people in the art world pay attention,” she says. “For Freedoms is important because it’s connecting us all in a way that we need to be.”

In other parts of the country, the story is similar. For Freedoms and the 50 State Initiative have helped to promote important work that was already being done. “Our participation was natural because the Missoula Art Museum is so mission-driven,” says Brandon Reintjes, the Montana museum’s senior curator. “Any time that we can support projects like this---—community-based civic engagement—we try to.”

The museum did not have time to plan new programmes, but a handful that were already scheduled fitted the bill. They include the placement this summer of an LGBTQ pride rainbow crosswalk in the Missoula Art Park, in association with the city and the non-profit organisation Empower Montana, and the commissioning this autumn of works by five artists with regional ties: Adrian Arleo, John Buck, Jaune Quick-To-See Smith, Richard Notkin and Jay Schmidt.

All the works are made in response to Philip Guston’s painting Cigar (1969), which is currently on loan to the museum and represents “artistic risk”, Reintjes says. Guston “started painting in this narrative, figurative style, abandoning his Abstract Expressionist work in response to social and political things that were happening in the US,” he adds. “Likewise, we feel as though we’re at a nexus, and we wanted to challenge these artists to look at Guston’s example and meditate on our current political climate.”

Nari Ward's For Freedoms billboard in Lexington, Kentucky Photo by Wyatt Gallery / Courtesy of For Freedoms

Since that climate is one of extreme polarisation, the question of how political museums should get is becoming increasingly urgent. And they carry extra weight in a place like Charlottesville, Virginia, where right-wing demonstrators last year rallied around a statue of the Confederate general Robert E. Lee and attacked counter-protesters, killing one, Heather Heyer.

“The 21st-century museum is a place for dialogue, and it can be perhaps a place where, mediated through art, some of the tensions around that dialogue might fall away more easily,” says Matthew McLendon, the director of the Fralin Museum of Art at the University of Virginia.

For its participation in the 50 State Initiative, the Fralin museum is organising an exhibition next January of commissioned works by local artists that will focus on the history of African-Americans in Charlottesville. Large-scale banners with reproductions of those works will be hung downtown this autumn, and the museum will hold public conversations and art-making workshops.

Town-hall discussions have been a hallmark of the group since it started, and co-founder Eric Gottesman says that the goal of the 50 State Initiative is “to increase the quality of civic conversations and inject art into public discourse”. Olivia Wall, the exhibitions and lectures co-ordinator at the Memphis College of Art in Tennessee, which is also participating, sees it as a campaign to spread a vital message. “Whatever you believe in, you should speak up about it. You should use your voice,” she says. “You should vote.”