Can the Glasgow School of Art be saved after second fire? 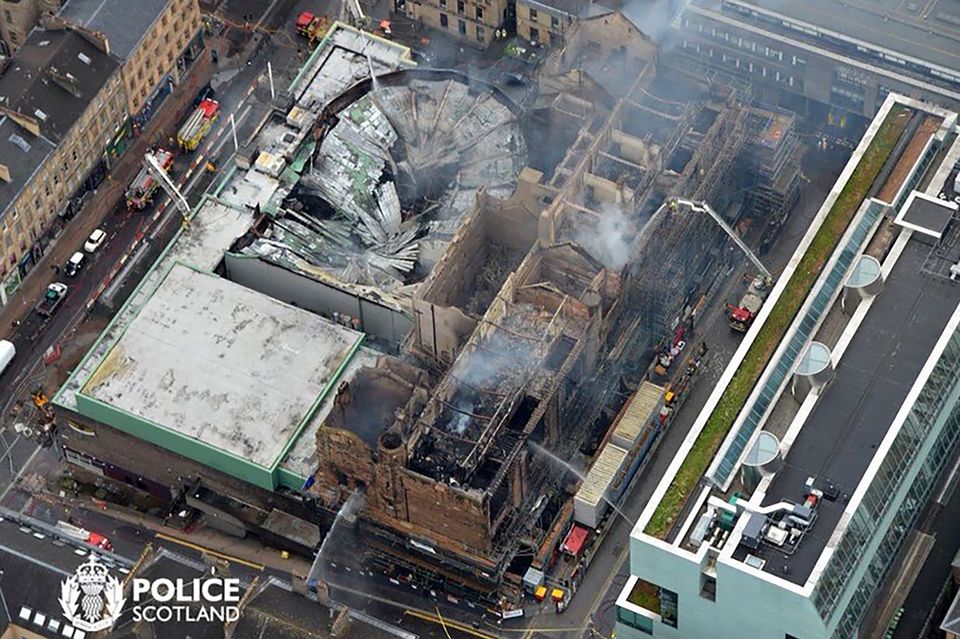 Artists and architects in Scotland say that the Glasgow School of Art may be beyond repair after a devastating fire tore through the Art Nouveau landmark on Friday (15 June), the second blaze to hit the historic site in four years. More than 120 firefighters tackled the fire, the cause of which is still unknown. The local artist Nathan Coley, who was nominated for the Turner Prize in 2007, posted on social media: “I’ve gone from despair to absolute rage. How the fuck was this allowed to happen?”

The Glasgow School of Art, which is considered Charles Rennie Mackintosh’s masterpiece, was completed in 1909. The building was badly damaged in a fire in May 2014 when the east wing was left relatively intact but major parts of the library and west wing were destroyed.

The latest fire, which began on Friday night (15 June) was much worse, with aerial shots showing both wings of the building affected. The blaze came as a major £35m restoration, led by the architects Page Park, was nearing completion. The first phase saw external stonework repaired and the roof replaced before the east wing interiors were restored last year; the library, which housed original fittings by Rennie Mackintosh, was meticulously recreated. The vast conservation project was due to be completed by February 2019.

The architect Alan Dunlop, a visiting professor at Aberdeen's Robert Gordon University, says: “It is desperately sad. I think, quite frankly, that it is the end of the building. The masonry appears to be still standing. But any sort of replica would be like creating a ghost shell, and would be doing Rennie Mackintosh a disservice.”

He adds that every “nook and cranny was digitised” by the Glasgow School of Art after the 2014 fire, which might aid future conservation efforts. Billy Hare, a professor in construction management at the Glasgow Caledonian University, tells The Art Newspaper that it remains to be seen if it will be possible to retain a facade from the current building. Rebuilding the art school would cost at least £100m, he says.

The Edinburgh-based artist Steven Cox also raised concerns, saying on Instagram: “I just can’t see or imagine how it could possibly be saved this time round. Could the building even be structurally sound after a second major fire?” Coley adds on Instagram: “The most important conservation project in the last 100 years, the beating heart of our city, the most symbolic romantic building in Scotland, allowed to die. A terrible reflection of the poverty of our time.”

A spokesperson for the British Automatic Fire Sprinkler Association told the Guardian that sprinklers had not been fitted as the building was still being restored. When asked about a possible public inquiry, the Scottish Culture Secretary Fiona Hyslop said on BBC television: "I understand people want a lot of questions answered but clearly we have to have the fire investigation first and we have to give them the time to carry out their very responsible duties to best effect.”