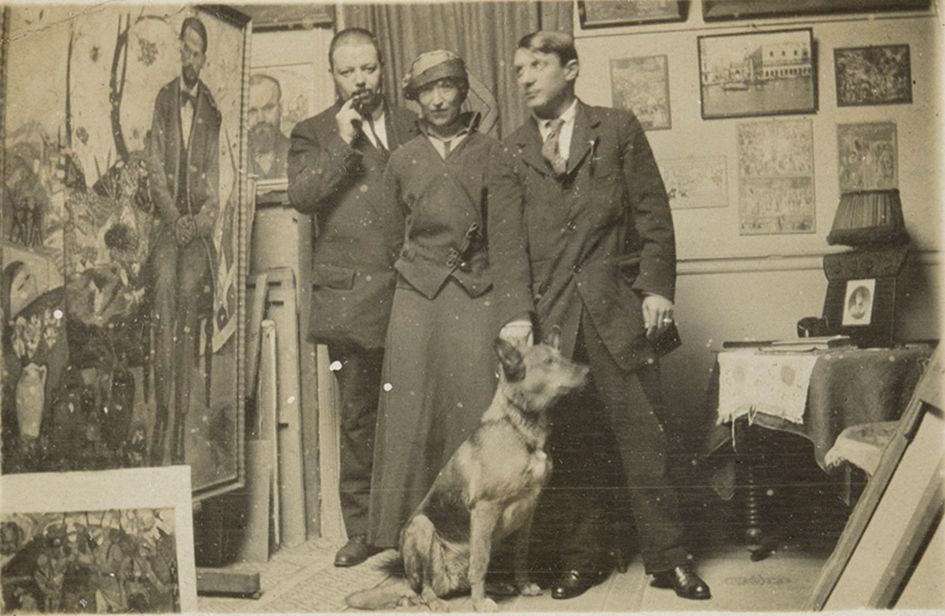 Along with Picasso (right), André Derain’s dog Sentinelle is the only other subject in this photo whose identity historians are certain of © RMN-Grand Palais (Musée national Picasso-Paris) / Michèle Bellot © Alexandre Zinoviev

A puzzle for our readers: can you identify Picasso’s friend, the possible mistress and the Parisian studio in this photograph? The Picasso Administration, run by the artist’s heirs, would like the answers. Traditionally, this image has been labelled as “Ambroise Vollard, Eva Gouel and Picasso with Sentinelle, the dog of André Derain, in a studio, in 1914”.

Yves Brocard, the author of a forthcoming book covering the artist’s love affair with Gouel, believes that the only certain figure is Picasso. Best known for dressing casually, often shirtless, Picasso here wears a suit and tie, although the jacket appears ill-fitting.

In an article on the Picasso Administration website, Brocard published his suggestions. The man on the left is certainly not Vollard, Picasso’s first major dealer, who had quite a different physique and appearance. The face in the photograph appears to be that of the Mexican mural painter Diego Rivera, although this is not certain because Rivera was tall (1.85m) and Picasso short (1.63m).

Acknowledging Picasso’s narcissism, Brocard suggests that the artist “always made sure to appear taller than he actually was by having his pictures taken from a low angle, as in this case, and placing himself slightly forward”. If the identification is correct, then this is the only surviving photograph of Picasso and Rivera together.

The woman in the hat bears little resemblance to Gouel, Picasso’s companion during his Cubist period (she died in 1915, aged 30). In the photograph, the features appear similar to those of the artist Marie Laurencin, although she had fled to Spain at the outbreak of the First World War. Brocard suggests that the woman in the photograph is the Russian-born painter Angelina Beloff, then Rivera’s lover, long before his marriage to Frida Kahlo. Picasso always seems to have had at least one lover (and usually several), so could it have been another one of his muses?

And whose studio are they photographed in? Surely, with such a large painting on the easel and other pictures in the background, it should be possible to identify it. Brocard argues that it was the studio of Alexandre Zinoviev, a Russian artist in Paris and Beloff’s friend. Zunoviev also knew both Picasso and Rivera, and the paintings in the photograph are similar to the Russian’s, although none have been identified.

At the time, Zinoviev was employed by the Czarist government to spy on Russian revolutionaries in Paris. Brocard even suggests the photograph may have been taken by Zinoviev to send back to his paymasters in St Petersburg. Assuming that all his identifications are correct, the image must date from July 1915 to early 1916.

Along with Picasso himself, the only other certainty is the dog. It is Sentinelle, who features in other photographs with Picasso. She was owned by the artist André Derain—who entrusted her to Picasso when he was conscripted to fight in the First World War. A German Shepherd, Sentinelle was hardly the most patriotic choice of breed in France during this turbulent period.