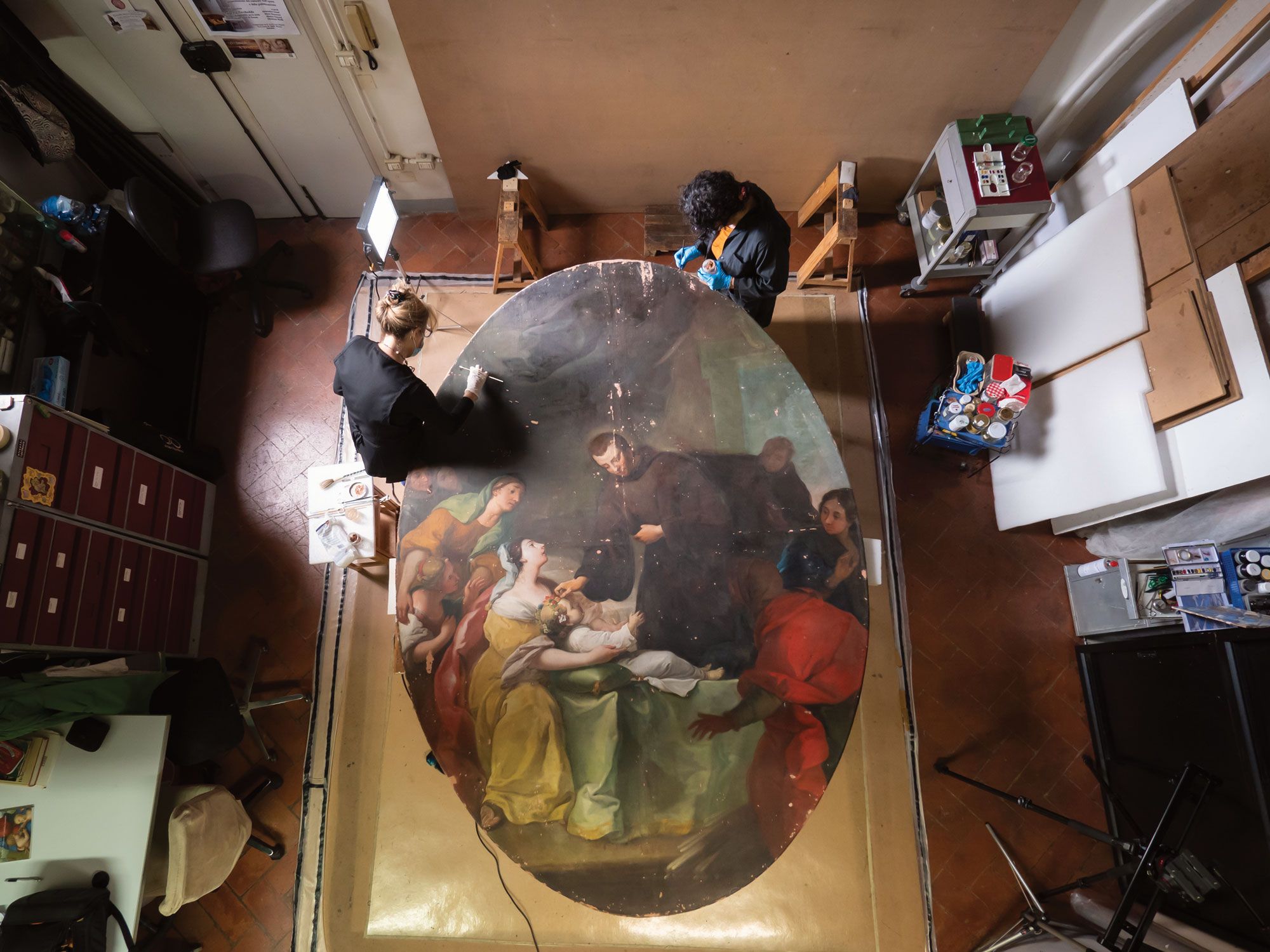 Conservators Elizabeth Wicks and Marina Vincenti are working on the restoration of Violante Ferroni’s Saint John of God Heals Plague Victims (1756), which will be reinstalled this May at San Giovanni di Dio Hospital in Florence Photo: Francesco Cacchiani

Jane Fortune was visiting Florence’s San Marco Museum in 2006 when she noticed a Lamentation with Saints in desperate need of repair. The panel was not by Fra Angelico, the painter who made the monastery-turned-museum famous, but Plautilla Nelli, an obscure 16th-century nun and artist. Only three signed works were known by Nelli then, and Fortune, an American philanthropist living in Florence, decided to fund its conservation.

That project encouraged her to establish Advancing Women Artists (AWA), a US non-profit that identifies, restores and exhibits work by female artists in Florence. To date the foundation has restored 70 works of art spanning the 16th to 20th centuries, found mostly in state museum collections, including paintings by Artemisia Gentileschi, Marisa Mori, Élisabeth Chaplin and Adriana Pincherle. Its final project is a pair of monumental oval paintings by the 18th-century artist Violante Ferroni, and after they are reinstalled at the historic San Giovanni di Dio Hospital in May, the organisation will permanently close due to a lack of funding.

AWA began with a wish list that Fortune assembled from book research and later snowballed when she and AWA director Linda Falcone went around town asking museum directors what needed repair within their collections. “Neither Jane or I are art historians, so it was very much just a different thing,” Falcone says. “I don’t want to say we didn’t follow the rules, but we didn’t even know what the rules were.”

Our job was not to restore every single work known to women. Our job was to launch the question: where are the women? Linda Falcone, Advancing Women Artists director

After finding works of art that had made it into public collections but barely into art history, AWA began a holistic restoration process. “We’re not actually looking for permanent restoration of the pictorial matter,” explains Falcone of the organisation’s multipronged approach. “What we are looking for is permanent restoration of the personality of the artist and her body of works.” To achieve that last part, AWA has funded professional photography, exhibitions, original research, lectures and books, and has partnered with the city’s museums. Nelli is a prime example of AWA’s success, since the number of works attributed to her has grown to 17 in just over a decade.

AWA arranged to permanently install the largest of these, a seven-metre-long Last Supper, at the Santa Maria Novella museum in 2019 after a decade of efforts to repair the damaged work. Completing this restoration was a full-circle moment for Fortune, who in 2017 announced that she would end her financial support of AWA after Nelli’s masterpiece was in place; she died the following year. 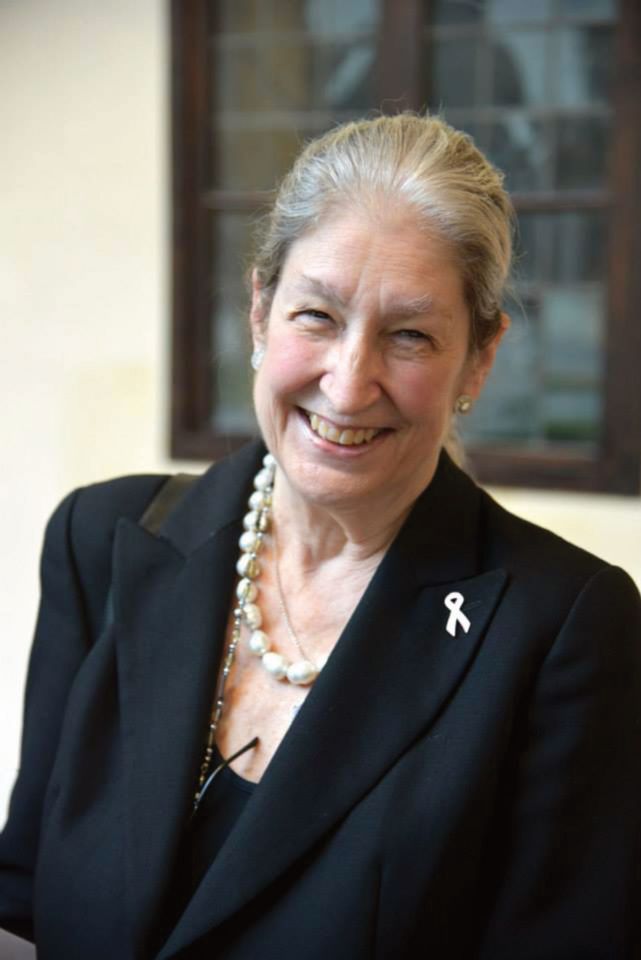 “I think it was essentially a case study,” Falcone says of the foundation, which has attracted global attention despite its microcosmic focus on women in Florence. “Our job was not to restore every single work known to women. Our job was to launch the question: where are the women?”

While AWA has successfully fanned the flames of interest in historic Florentine women artists, it is unclear who will now pick up the torch—both ideologically and financially.

Some museums that partnered with the foundation will continue these activities. “There is determination to carry on their mission and their legacy,” says the director of the Uffizi Galleries, Eike Schmidt. Around a dozen works by historic female artists are currently in the Uffizi’s conservation studios, Schmidt says, and the museum has placed more works by women on permanent view. The Uffizi also started an initiative in 2015 to mount two exhibitions a year dedicated to women artists. The Pitti Palace, its sister museum across the river Arno, conserved a statue by Marguerite de Bavier-Chauffour in 2014. Falcone notes that other museums have also restored works by women in recent years. 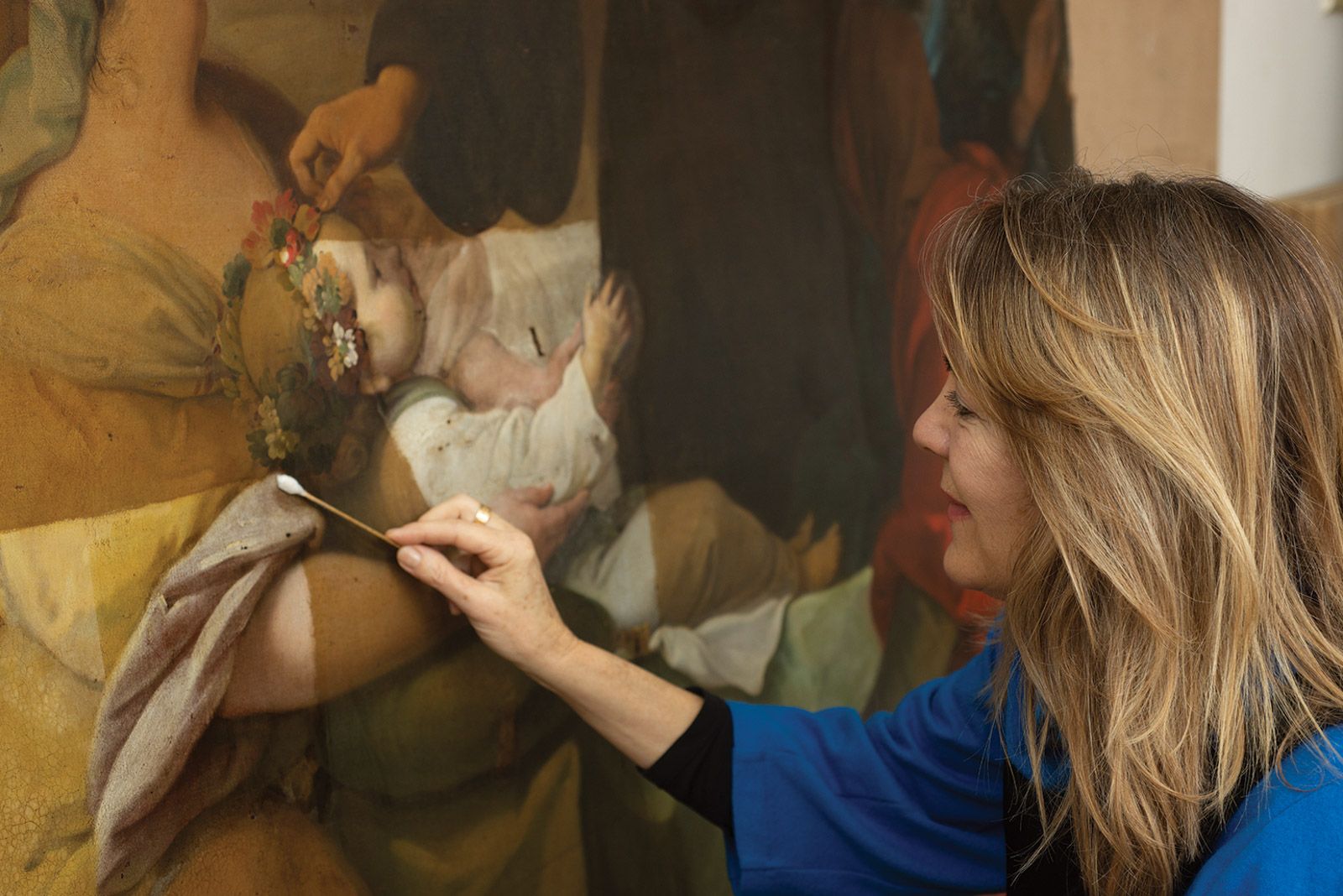 This may signal a shift, one bolstered by a 2015 reform that granted several Italian state museums greater autonomy over their operating budgets, allowing them to plan their own restorations. That said, museums can only fund the conservation of works in their own collections (and not those owned by historic churches and hospitals, for example).

Schmidt hopes that local organisations sponsoring restorations will also be motivated to conserve more works by women artists, noting that it has already become more mainstream for Italian banking foundations. “Twenty years ago, it would have been difficult to find funding for the restoration of a work by an unknown artist of the past,” Schmidt says, crediting AWA with fuelling popular interest. “Even if they’re not household names, people in more general foundations actually do get it, that thanks to restoration they are able to bring somebody back from oblivion.”