Young citizens, many of them voting in their first presidential election, provide phrases to be shown on LED billboard trucks across the city 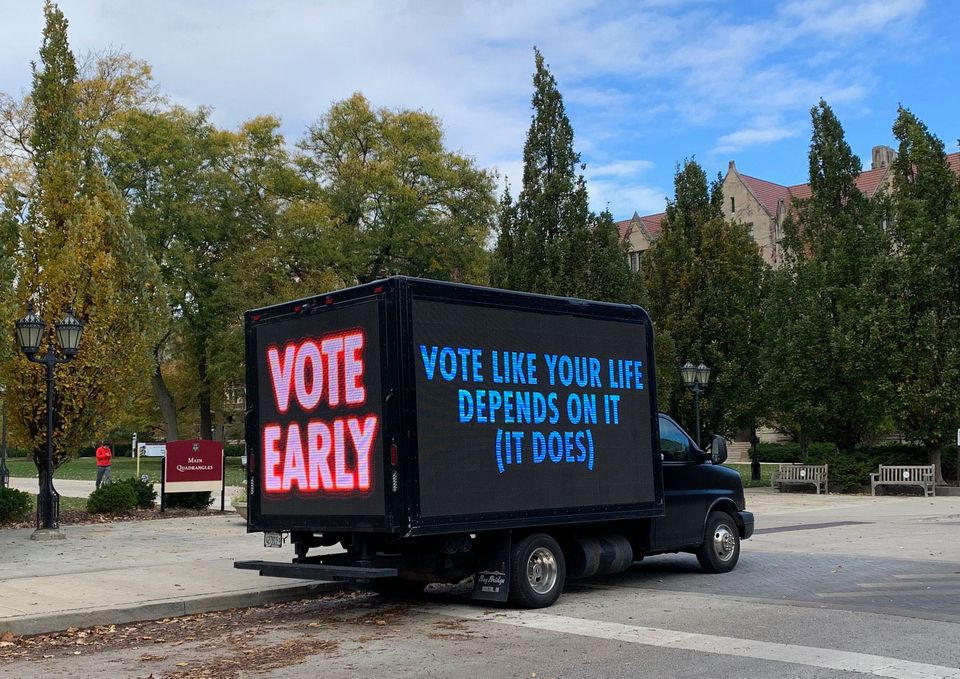 Jenny Holzer's You Vote project was done in collaboration with students at The University of Chicago Photo: Ruth Lopez

In the weeks leading up to the US presidential election, the conceptual artist Jenny Holzer has deployed a fleet of LED billboard trucks with the aim of encouraging voter participation. Over the past month, her You Vote project has logged more than 200 hours of activations—on trucks, theater marquees, light projections, and billboards—in cities in key states including Florida, Illinois, Michigan, Pennsylvania, Wisconsin, as well as the nation’s capital, Washington, DC. Chicago was not originally on the trucks’ route, but it was added since Holzer was working on a concurrent project, You Be My Ally, commissioned by The University of Chicago and involving text from their core curriculum. In the Windy City, You Vote, which rolled out on 24 October and again on 30 October, has also involved students at the university—many of them voting for the first time in a presidential election.

Christine Mehring, a professor of art history at the college and an adjunct curator at the Smart Museum of Art who oversaw both projects in Chicago, says Holzer’s collaboration with the university came about after the artist—a former student there herself—was awarded its Jesse L. Rosenberger Medal for Outstanding Achievement in the Creative and Performing Arts last June. Mehring says the university hoped to display one of Holzer’s pieces on campus, but Holzer instead suggested creating a new piece involving student participation. The text pieces in You Be My Ally, while completely separate, “resonated very strongly in the context of the presidential election,” Mehring says, adding that the students were determined to be more involved. “Students wanted more, they wanted to participate in getting out the vote.” As a result, while Holzer has carefully selected the phrases and sequence that appear on the You Vote trucks across the country, in Chicago students wrote their own phrases, guided by one rule: to not be partisan.

For Melia Allan, a 19 year-old political science and music major, writing her phrase “Vote Until It Is Accessible For All”, was a chance to express her concern with the various roadblocks some citizens may encounter as they try to participate in the political process, such as lacking an address or not having their signatures recognised. “There are so many things that can invalidate a ballot,” Allan says. Not only will this be the first time she is voting in a presidential election, Allan is also volunteering as a poll worker. Creative writing major Anne Pritikin, 20, who is also voting in her first presidential election, submitted the pithy “Happy?”, which she has found to be a useful prompt in general. “It really works in multiple capacities.”

Roko Rumora, who contributed the phrase “Your Birthright Is My Life’s Desire”, is an art history doctoral student who was born in Croatia and has been living in the US for ten years. “It will probably be a couple more elections before I can participate as a voter,” he says in an email. “I wanted my submission to convey the value of American citizenship both for those who have it and those who don’t; whether you are waiting for hours at the polling booth or for decades at the border, the wait is ultimately worth it—at this point it has to be.”