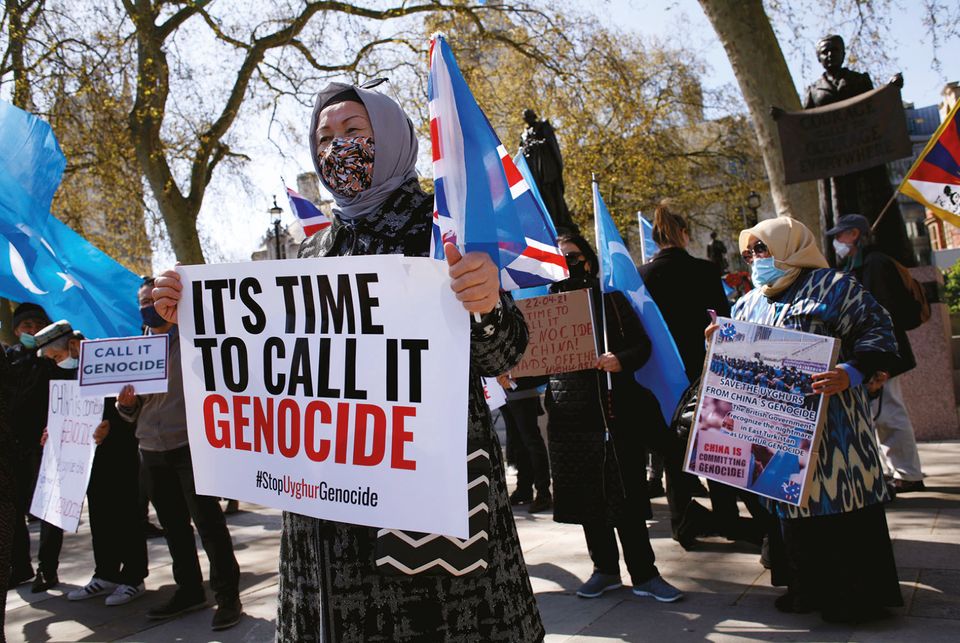 Members of the Uyghur community and human rights activists demonstrate outside the UK Houses of Parliament Photo: David Cliff/Anadolu Agency via Getty Images

The destruction of cultural heritage and property played a key role in the UK Members of Parliament’s (MPs) unanimous declaration this April that China was committing genocide against its Uyghur population and other minorities in the Xinjiang region, The Art Newspaper can reveal.

The declaration comes amid mounting pressure on the government to formally acknowledge China’s reported human rights abuses and consider its future relationship with the superpower. Adding to the urgency is a staggering new report, published in May, which suggests that birth rates in the Xinjiang region have dropped by almost half since the Chinese government is alleged to have instigated its persecution of the Uyghurs and other minorities.

While the declaration does not oblige the UK government to take further steps, it is widely perceived to be an important step towards sending a warning signal to China. “Cultural and religious destruction was one significant factor in the Members of Parliament reaching this united position, across parties,” says Joanne Smith Finley, a reader in Chinese Studies at Newcastle University, who found herself sanctioned by China while researching the alleged genocides (linguistic, religious and cultural erasure) in the region. She went on to work closely with the MP Nusrat Ghani, who led the debate in the Commons.

MPs were presented with a large range of findings to help establish whether the acts—increasingly reported since 2016—constituted genocide under the UN’s Genocide Convention of 1948, which is broadly defined as “actions committed with the intent to destroy, in whole or in part, a national, ethnic, racial or religious group, as such”.

In addition to the widely reported mass surveillance, re-education camps, the internment of more than one million individuals within forced labour camps and the distressing recent reports of declining birth rates, cultural property was noted as a target.

In particular, a legal opinion prepared by the Essex Court Chambers in February found that: “Part of Chinese authorities’ efforts to erase Uyghur culture has been physically to demolish cultural property.” The report also referred to the work of other agencies, including the Uyghur Human Rights Project, which estimated that 10,000 to 15,000 cultural sites had now been “destroyed or defaced”.

The reality of targeted destruction and theft of cultural property in situations of genocide is widely recognised. Perhaps the best-known example is the methodical destruction and looting of art by the Nazis in Germany, which went far beyond collateral damage incurred in the context of conflict and demonstrated the shockingly efficient way in which such concerted attacks could undermine a society’s identity, both past and present.

Yet the term “cultural genocide” itself has an unsteady history. Considered by the Polish lawyer Raphael Lemkin (who was also an art collector) as a component of genocide in his introduction of the term in the 1940s, the legal understanding of it has since been streamlined and focused on “physical and biological” acts. The International Criminal Tribunal for the former Yugoslavia legally acknowledged the destruction of culture as evidence of genocidal intent, rather than it just being an unfortunate by-product. However, it remains just one element taken into consideration.

The five acts of genocide

“The destruction of cultural objects can only be an indicator of a genocidal intent—but I do not believe it alone would be accepted by an international court as sufficient to conclude that an act of genocide was occurring,” says Philippe Sands, a human rights lawyer and a professor of Law at University College London.

Lord Alton of Liverpool, who recently played a key role in debates over how countries thought to be committing acts of genocide should be treated in the UK’s new Trade Bill, concurs: “In establishing specific intent, assistance may be derived from various factors, such as the widespread and systematic character of the atrocities and the destruction of cultural property, including religious and cultural sites.”

Pressure, led by a coalition of human rights organisations, is also beginning to mount in order to boycott the next Winter Olympics, which are due to take place in Beijing in 2022.

The Chinese government denies the allegations.