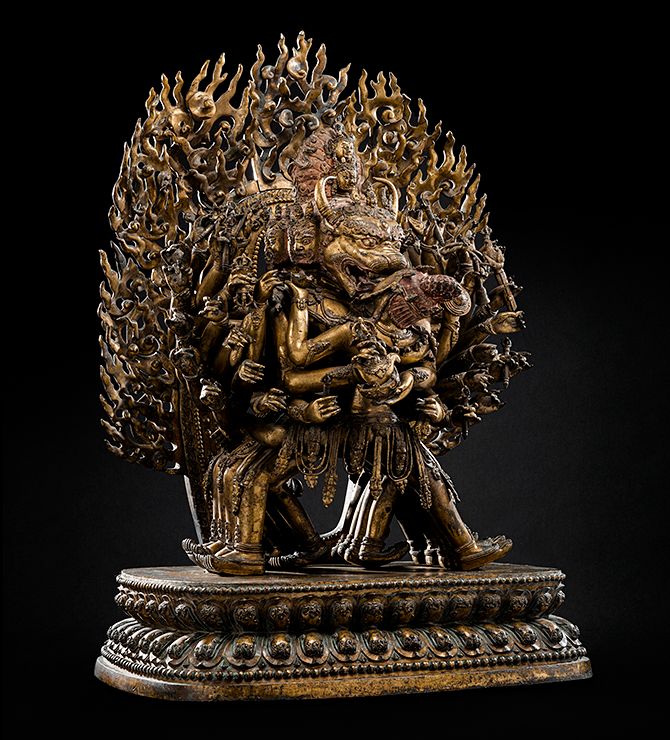 A private Chinese collector paid €9.5m (€14m with fees and VAT) for a gold and bronze Ming-dynasty sculpture dating from 1473 at Nagel Auktionen in Stuttgart earlier today, the highest price ever paid for a work of art at a German auction.

Chinese museums and billionaires and European museums competed earlier today in the bidding for the sculpture, which was consigned by a Swiss collector, says Michael Trautmann, the head of the Asian art department at Nagel Auktionen. The sculpture was last on the market in 1975, when it was sold by Alan Hartman in New York.

Weighing 169kg, the sculpture contains 10kg of gold. It portrays the god Vajrabhairava, adopted by Buddhists from Hinduism. He is depicted with 34 arms, 16 legs and nine heads. Unusually, an inscription on the sculpture gives an exact date of production during the realm of the Chenghua Emperor. The sale catalogue says the bronze may have been a gift to the emperor from a favourite concubine.

The previous auction record in Germany was held by a Max Beckmann work that sold for €5.5m (with fees) at Villa Grisebach in 2018. The 1942 painting, called The Egyptian Woman, was acquired by a private Swiss foundation.