Electronic visas pave the way for ever greater visitors numbers, creating major logistical problems at Tsarskoe Selo and the Hermitage 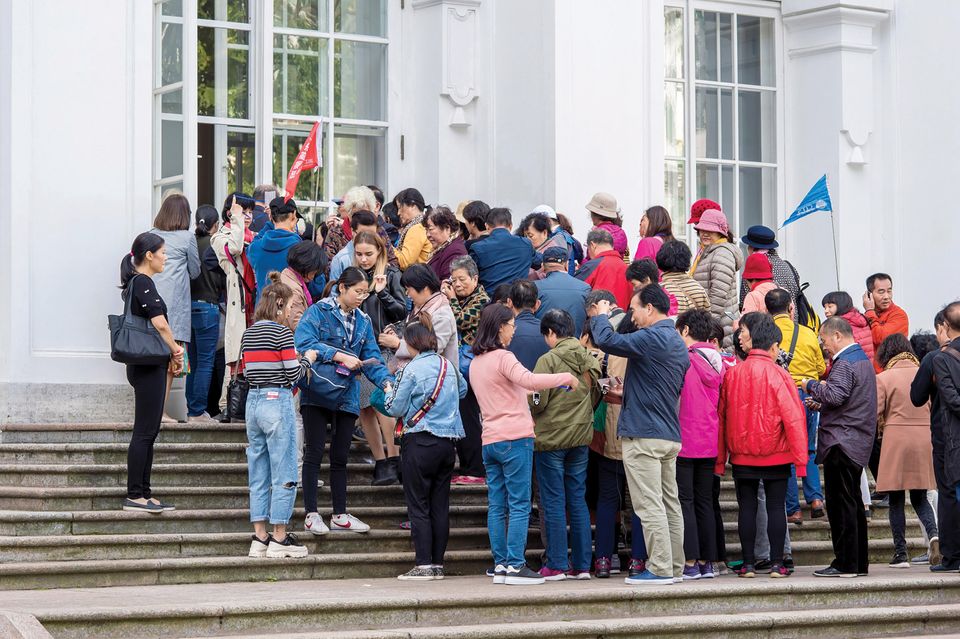 Chinese tourists to Russia are having a major impact on the country’s museums as their numbers grow by 20% annually. St Petersburg is expected to see an even bigger rise after the city introduced electronic visas for visitors from a number of countries, including China.

At the St Petersburg Cultural Forum in November, where China was the main guest, culture minister Vladimir Medinsky told the Russian newspaper Komsomolskaya Pravda that complaints about too many Chinese tourists in the city’s museums are solvable “growing pains” and a positive consequence of Russia’s “museum boom”.

According to St Petersburg’s governor Aleksandr Beglov, 400,000 Chinese tourists had already visited Russia’s imperial capital by September this year. China’s consul general expected that number to rise to 1.3 million by the year’s end, he told a local newspaper. Moscow reported more than 800,000 Chinese tourists in 2018. For comparison, Paris counted 1.1 million visitors from China in 2017, according to the Paris Region Tourist Board.

The influx has had a dramatic effect on logistics. The Catherine Palace in Tsarskoe Selo near St Petersburg, home to the recreation of the legendary Amber Room, which disappeared during the Second World War, was put on “red alert” due to Chinese tourists, according to deputy culture minister Alla Manilova.

“The ministry is receiving mass complaints against Tsarskoe Selo about a mass collapse with tourists,” she said in late September, according to an Interfax news agency report. “Our tourists aren’t able to get in because Chinese groups are getting through (...) We have a red danger alert (...) for Russian tourists.”

Interfax also reported that Olga Taratynova, the director of the Tsarskoe Selo State Museum, said the average waiting time for tickets was four hours, and that the museum plans to introduce personal timed tickets that would require passport identification for purchase.

The ministry denied media reports that restrictions would be placed on Chinese tourists, and two days later Manilova told journalists that “tourists from a wide range of countries are welcome by Russian museums, and no restrictive measures are foreseen for them”.

Amber is particularly alluring to Chinese tourists. Russian business news publication RBC reported that amber items were the most popular purchases among Chinese tourists to Russia, accounting for 30% of all their transactions at Russian stores via Chinese payment systems WeChat Pay and Alipay.

Vladislav Kononov, a ministry of culture official in charge of museums, said in November that it is necessary to explain to Chinese tourists that there are things to see at Tsarskoe Selo other than the Amber Room.

Museums and tourism officials are not discouraging the influx, however. Electronic visas, which are for individual tourists rather than groups, are seen as a way to lure a new demographic.

The State Hermitage Museum has also faced logistical issues resulting from increased attendance, although not as extreme as those at Tsarskoe Selo. It is now also considering timed tickets, Hermitage director Mikhail Piotrovsky said in October. At the same time, the Hermitage Museum reported that it has met with the Chinese internet search giant Baidu to discuss “possibilities for [digital] representation of the Hermitage’s museum collections in China”.