Academics challenge the provenance of the Edo plaque as well as two Igbo alusi figures that sold under estimate for €212,500 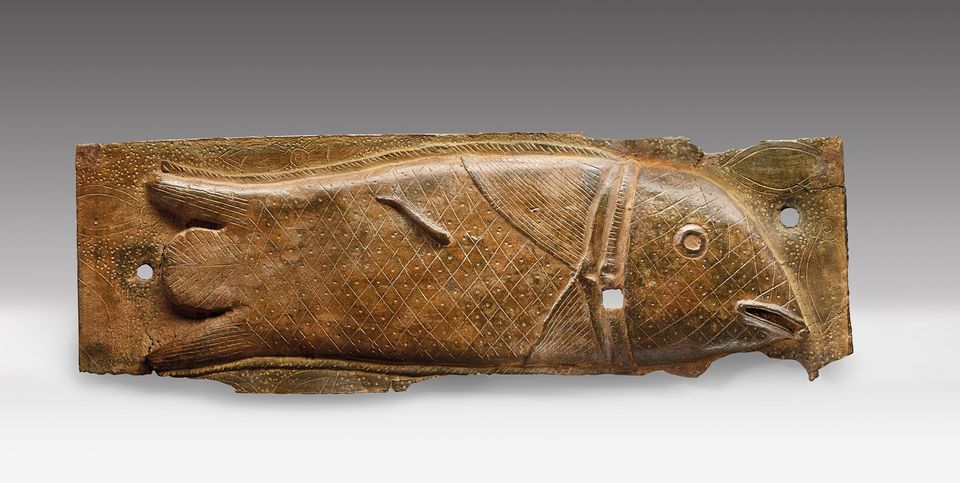 A bronze plaque made in the former Kingdom of Benin, which failed to sell at an auction in Paris yesterday, has reignited the debate over the market for cultural property removed from colonised Africa. The sculpture of a fish, which was consigned to Christie’s Arts of Africa, Oceania and North America sale in Paris, carried an estimate of €30,000-€50,000; the work was described in the sale catalogue as an Edo bronze plaque made in the Kingdom of Benin.

Prior to the Paris sale, academics raised concerns about the Benin piece. A tweet posted in May under the Brutish Museums account—led by Dan Hicks of the Pitt Rivers Museum at the University of Oxford—says that “two comparable examples, from the St Petersburg and Berlin Museums, are both well documented as looted from the Royal Court in the sacking of Benin City in February 1897”. More than 4,000 bronze and ivory artefacts were seized by the British army from what is now southern Nigeria as part of a punitive expedition in 1897.

These two comparable examples, from the St Petersburg and Berlin Museums, are both well documented as looted from the Royal Court in the sacking of Benin City in February 1897. Are @ChristiesInc willing and able to confirm this as the provenance for this Wolff-Knize plaque too? pic.twitter.com/LYFg1xaz27

— The Brutish Museums #BlackLivesMatter (@BrutishMuseum) May 15, 2020

Erin Thompson, an associate professor of art crime at John Jay College in New York, said after the auction: “I’m hoping buyers are realising that it’s not appropriate to collect these pieces and I hope that owners will try to work towards repatriation rather than reselling these objects. I realise it’s not fair to ask owners to bear all the financial burden of repatriation but I think that it’s possible to work cooperatively with claimant countries to make it fairer for everyone.” Owners could donate to a non-profit organisation dedicated to repatriating objects in exchange for a tax deduction that might be as beneficial as a sale, Thompson adds.

Provenance details outlined in the sale catalogue show that the work came from the collection of Vienna-born Frederick Wolff-Knize (1890-1949). The plaque was loaned to the Weltmuseum in Vienna and was later acquired by the Chicago collectors James and Marilynn Alsdorf around 1957.

“We have seen documentary evidence, which illustrates that the lot was acquired by our vendor before 1960 and its acquisition did not take place in the lot’s source country,” says a Christie’s spokeswoman. Christie’s denies that any items in the sale were acquired illegitimately.

Meanwhile, Chika Okeke-Agulu—a professor of indigenous, Modern and contemporary African and African diaspora art history and theory at Princeton University—heavily criticised the sale of a pair of Igbo alusi figures at the Christie’s auction.

In a 2017 op-ed article in the New York Times, I wrote about widespread looting of art from Eastern Nigeria during the Biafran War (1967-70), and that my mother still mourns the overnight disappearance of countless alusi (sacred sculptures) from communal shrines in my hometown, Umuoji, in Anambra State. These art raids from all indications were sponsored by dealers and their client collectors mostly based in Europe and the US. It turns out that later this month the venerable Christie's will auction two of these impressive alusi (seen here) said to have been acquired in 1968-69 in situ by Jacques Kerchache (1942-2001). That is, Mr. Kerchache acquired these sculptures in the Nri-Awka area (a half-hour drive from my hometown) during the darkest years of the Biafran War. Dear Christie's, let’s be clear about the provenance of these sculptures you want to sell. While between 500,000 and three million civilians, including babies like me, were dying of kwashiorkor and starvation inside Biafra; and while young French doctors were in the war zone establishing what we now know as Doctors Without Borders, their compatriot, Mr. Kerchache, went there to buy up my people’s cultural heritage, including the two sculptures you are now offering for sale. I write this so no one, including Christie's and any potential buyer of these loots from Biafra can claim ignorance of their true provenance. These artworks are stained with the blood of Biafra’s children. #christies #warloots #biafranwar

"Some of the items [including the Igbo figures and Benin plaque] ought not to be auctioned," Babatunde Adebiyi, the legal adviser of the Nigerian National Commission for Museums and Monuments, told CNN. “We suspect that some were taken out of Nigeria against the Unesco convention of 1954 [linked to] antiquities taken from conflicts.”

The Igbo figures were owned by Jacques Kerchache, an advisor to the late former French president, Jacques Chirac. “It is our understanding Kerchache never went to Nigeria in 1968-69 which suggests local agents were involved in initial trading likely to Cameroon before shipment to Europe. It is however unclear whether Jacques Kerchache acquired these statues in Cameroon or Paris,” a Christie’s spokeswoman says. “At no stage… has there been any suggestion that these statues were subject to improper export.”

The spokeswoman adds: “We always fully comply with the legal framework for offering works of art in the relevant sale site. Our longstanding commitment to diligent research requires objects to have verifiable documented provenance that the object was taken out of its source nation prior to the earlier date of 2000, or the date which is legally applicable between the country in which the sale takes place and the source nation. This is also the case with these objects [Igbo pieces].”