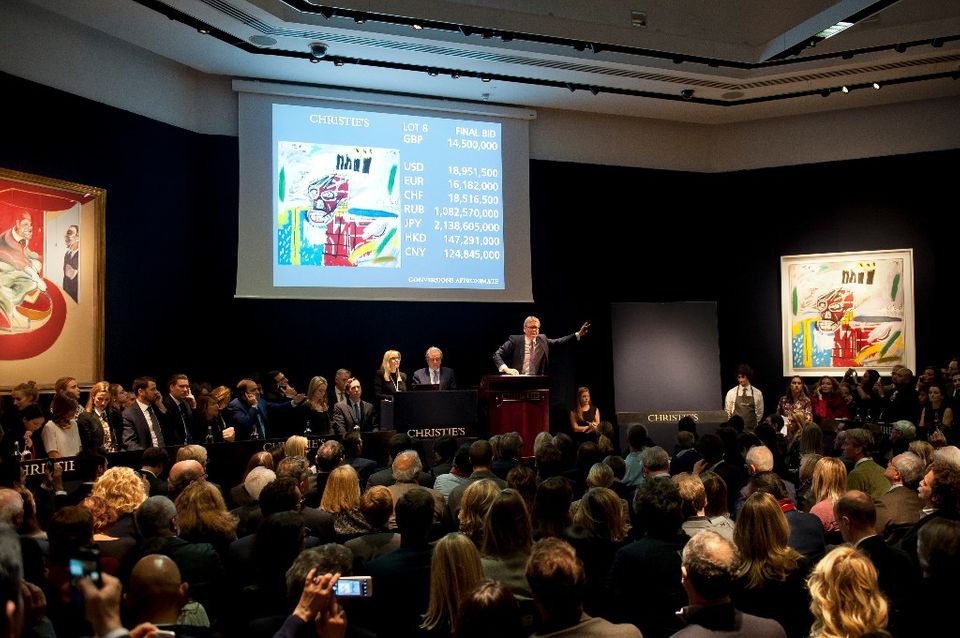 In stark contrast to Sotheby’s sales the night before, and after an efficient sale of 34 lots at Phillips’s 20th Century and Contemporary sale totalling £23.9m hours prior, Christie’s proved the depth of the international art market with double-header sales of post-war and contemporary and 20th century Italian works that saw solid results for stalwarts and deep bidding on established names new to the evening sale.

The evening’s £131.7m total, while below the presale estimates of £168.4m to £236.3m--which included a major Francis Bacon that failed to sell—nonetheless approached the standing record of £132m for an October contemporary sale in London, quashing concerns over a flooded field. “I think we can be very confident in the market”, says the house’s head of post-war and contemporary in Europe, Francis Outred.

The Bacon, Study of Red Pope 1962, 2nd version 1971, was an important and fresh-to-market work from a European collection, but the unpublished estimate of £60m struck many observers as too high. Its failure to attract a single bid seemed to stun the house. After the sale, Outred notes that there were “three or four” interested buyers in the room, but “it was like a gunfight--if someone had pulled the trigger, I think it would have taken off.”

Instead the top price was £16.5m for Jean-Michel Basquiat’s Red Skull (1982), around the midpoint of the £12m-£18m estimate with fees. Head of sale Katharine Arnold revealed that five days prior, the US consignors had informed the house that they would be donating 100% of after-tax proceeds to the KIPP public charter school network.

The work was of similar vintage to the record-setting $110m canvas sold to Yusaku Maezawa at Sotheby’s New York last May, and the Japanese collector was again responsible for notching a new high, this time for Antony Gormley, paying £5.3m with fees (est £5m-£7m) for the monumental lead sculpture Case for an Angel (1989), which he immediately Instagrammed.

Despite the strong results, energy during the sale was mixed. Pointing to the difference between the £60m Bacon and a smaller pope painting from 1955, which sold for £11.5 with fees, London dealer Pilar Ordovas says, “The market showed works that were correctly priced performed well. I think it is a very healthy sign.”

The Thinking Italian portion of the night, with 31 lots, was similarly lively but indicated subtle shifts in the market’s preferences. There were punchy prices for historical names that have not yet hit the international radar, including Mario Schifano, Franco Angeli, and Vincenzo Agnetti; and while Lucio Fontana’s Concetto spaziale, in piazza San Marco di notte con Teresita (1961), an homage to his wife studded with chunks of Murano glass, nailed its estimate at £10m with fees, buyers showed greater enthusiasm for more attractively priced outlier works. One standout, and an artist record, was Michelangelo Pistoletto’s Uomo che guarda un negativo (1967), featuring a picture of Alighiero Boetti superimposed on Pistoletto’s signature mirror. It was sold for £3.7m with fees, third-highest in the sale, and all told, the Italian lots added £32.2m to the house’s total for the night.