Some Italian-Americans, including the New York governor Andrew Cuomo, say statues of Columbus symbolise the history of Italians in the US 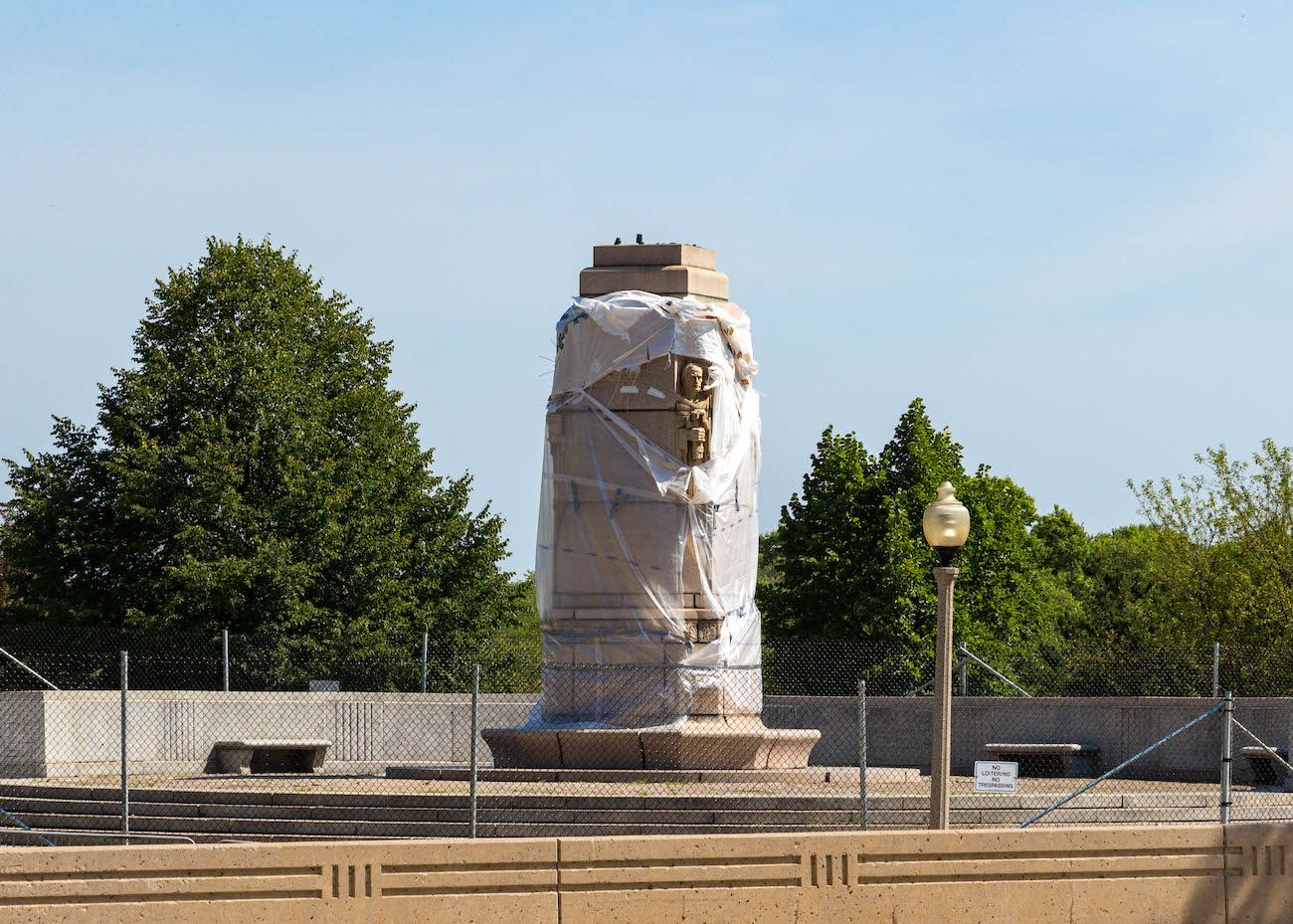 A statue of Christopher Columbus was removed from Grant Park, Chicago, last month

As the discourse about the removal of monuments valourising white supremacist or colonial figures continues to evolve amid Black Lives Matter protests, US memorials to Christopher Columbus are at the centre of a curious debate between those who advocate for their destruction or removal and those calling for the monuments to be preserved. Among the latter are some Italian-Americans who view Columbus as an emblem of Italian heritage in the US.

On 13 August, the Italian-American Alliance and other activists held a conference in Chicago calling for cities nationwide to keep monuments to Columbus in public view for their historic and cultural value. The organisation had previously spoken out against the removal of a statue that was beheaded in the city by demonstrators in June and was removed in July, arguing that the memorial should have been repaired and returned to its original location.

Last month the group also organised a rally to protest the proposed removal of a Columbus statue in Marconi Plaza in Philadelphia, which the Philadelphia Art Commission took down this week. The statue, which had been enclosed by plywood after violent protests erupted in recent months, will be placed in temporary storage. Every six months, officials will  report on their efforts to find a permanent home for the statue. Similarly in Boston, a decapitated statue of Columbus was removed this week, and the Boston Art Commission says it is currently brainstorming about the work’s future.

Some groups, including the Italian-American Heritage Society of Chicago, supported the removal of the Columbus statue in Chicago. In an interview with the Chicago Sun Times this month, the founder and president of the organisation, Gabriel Piemonte, told reporters that the statue was “a disgrace to the city” and that its removal “should be permanent”. Some who disapproved of removing the statues were “harassing and threatening people who disagree with their position”, he said.

In early June, Governor Andrew Cuomo of New York also voiced his support for keeping a statue of Columbus in Manhattan’s Columbus Circle during his daily televised Covid-19 briefing. Despite the widespread vandalism to and removal of similar memorials nationwide amid recent protests, the governor argued that the monument was a symbol of an “Italian-American legacy” and that, while he “understood the feelings about Columbus and some of his actions, which no one would support”, the statue “has come to represent and signify appreciation for the Italian-American contribution to New York”.

This argument arises partly  from the fact that Italian immigrants in the US faced violent discrimination in the 19th century by a predominantly northern European population,  which  contributed  to support for an  Italian explorer credited with  discovering  America becoming  a national heritage figure.

The 76 ft-tall marble monument on Columbus Circle was carved by the Italian sculptor Gaetano Russo after  the 1891 mob lynching of 11 Italian-Americans in New Orleans  over their alleged role in the death of a police chief. Some had been acquitted and others were awaiting trial.

The governor’s comments came on the heels of petitions and demonstrations calling for Columbus Circle to be renamed and for all statues of Columbus to be removed from New York City. Memorials to Columbus, protestors argue, are an affront to the Indigenous Lenape tribe that lived in New York before the arrival of Dutch settlers in the 1600s. Some point out that the  reverence for the statue  does not acknowledge that the community known as Seneca Village,  a hub for African Americans, was destroyed to create a portion of nearby Central Park in 1857.

One petition recommends “renaming the site after the Lenape Indians or Seneca Village”, while suggesting  that “ultimately the city and its leaders should consult with Native American and Black leaders to decide what is best to move the city forward and remove the stain of white supremacy from our city”.