A wave of burglaries from English and Welsh churches during the past decade appears to have been carried out by the same criminal gang. Martyn Barnes, the detective in charge of tracking down the thieves, says that he is pursuing “an organised criminal enterprise targeting rural churches up and down the country”.

The investigation, codenamed Operation Icarus, is based at West Mercia police station in Hereford. It began after a collector in south London became suspicious about the provenance of items he had bought and contacted the police. He is being treated as a witness, rather than a suspect. The investigation then moved to south Wales, where a 50-year-old man was arrested earlier this year. The thefts are believed to have taken place since 2005. Churches were targeted in Berkshire, Buckinghamshire, Cheshire, Devon, Kent, London, Suffolk, Sussex, Yorkshire and Wales, but Herefordshire has been particularly badly hit.

So far, 70 church objects have been recovered. They include stone and wood carvings, stained glass, tombstone covers, medieval brasses, glassware, Bibles, paintings, a sword and embroidered fabrics. Their value on the open market has been estimated at around £250,000.

Of the 70 objects, 47 have now been identified as coming from specific churches. This leaves 23 items that were taken from unidentified sites. Some items appear to have been stolen from dark corners or high up on walls, so the losses may not have been noticed.

ChurchCare, the Anglican body that advises churches on their buildings, received reports of 14 thefts of artefacts last year, before the arrest. It received no reports this year until 19 June, when news came that a carved stone from a cross, dating to around 800, had been stolen from All Saints, Hovingham, in North Yorkshire. Returned to their rightful owners

• A pair of painted panels of saints from the 15th-century rood screen at the Holy Trinity Church in Torbryan, Devon (stolen in August 2013).

• A heartstone from Dore Abbey in Herefordshire. This stone plaque marked the place where the heart of John de Breton, the bishop of Hereford, was buried in 1275 (stolen in 2012). 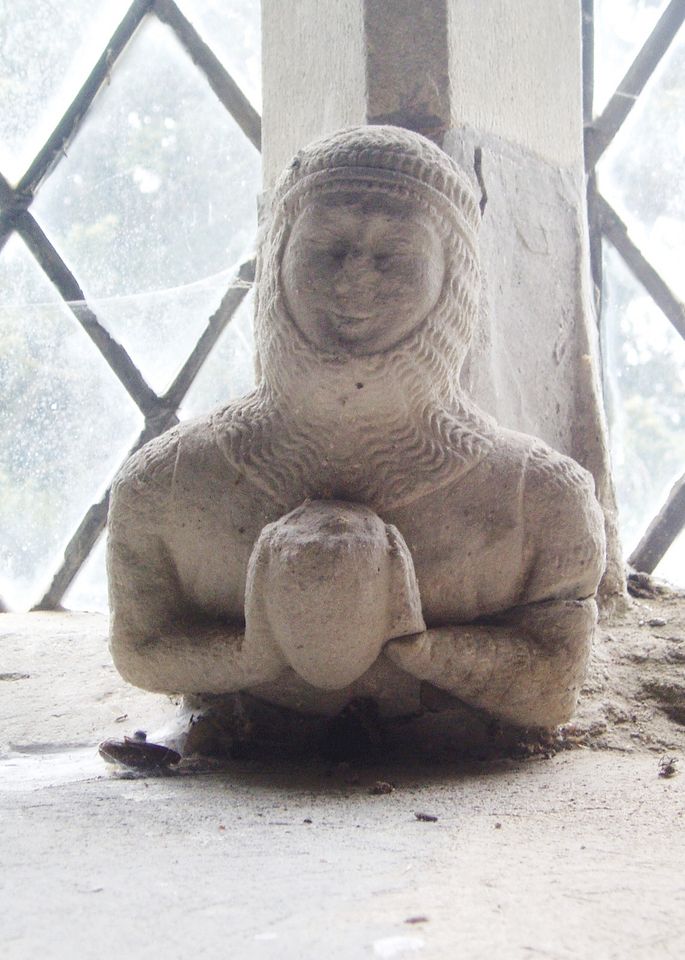 This knight’s head was stolen from a church in Castle Frome, Herefordshire. Photo: © Aidan McRae Thomson

• A stone funerary head of a knight from St Michael’s Church in Castle Frome, Herefordshire. It probably came from a memorial to Adam de Lacy, who died in 1297.